Randy participated a couple of times in the Lawrence, Kansas raid during the Civil War. He usually did so reluctantly, a Confederate with principles, often standing up against Reb reprobates who wished to do harm to women and children. See The Stranger Wore a Gun, for example. In Fighting Man of the Plains (a rather silly title) he plays Jim Dancer, a renegade turned sheriff, a classic Western good badman – the sort of role at which Scott excelled. As a railroad worker in Lanyard, Ks. (a sort of Abilene/Dodge), he tries to carve out a new life for himself, lay down his guns and put his past as killer behind him. But of course his true grit comes out and when the elders need a tough marshal to clean up the town, it’s to Randy they turn. 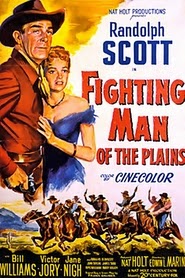 Nice remastered print
The opening sequences are actually quite surprising. Scott shoots down an unarmed man, believing him to be his brother’s killer. This isn’t what we expect from Randy. And anyway, it turns out to be the wrong man he killed. Oops. So he’s haunted by this and is tracked down by a certain Cummings (good old James Millican), a sleuth from the “Pleasanton” Detective Agency of Chicago, Illinois. Movies often invented euphemisms for the Pinkertons, perhaps because the real Pinkerton agency was still active and they wanted to avoid lawsuits. In a twist, Randy manages to swap identities with Cummings and takes over the man’s rep as well as ID.


Lanyard, Kansas is a railroad boom town. There is the inevitable crooked town boss. Such bosses are nearly always saloon owners and nearly always Victor Jory, so when we see saloon owner Jory being decent, and nice to Randy too, we are confused. The actual crooked town boss appears to be Slocum (Barry Kelley), the real assassin of Randy’s brother. Coincidence, huh? There are other amazing coincidences and stretches to credibility, such as when Joan Taylor as Evelyn, the daughter of the man Randy shot in Lawrence, happens to live in Lanyard and doesn’t recognize him. In fact she falls for him. But then stretches of credibility were common in Westerns. You have to a bit gullible to follow the whole genre, n’est-ce pas? The cast on the set
There are some good bits, such as when Marshal Randy with a shotgun stands down a lynch mob. A bit of a cliché but Westerns were kinda based on clichés. In a good way, I mean. Let’s call them respectful conventions and then they’ll be acceptable. There’s another episode when the steely marshal in black advances implacably on a foe, shoots him down and then snarls at a bystander, “Was it a fair fight?” Well, no, Randy, it wasn’t, not really. 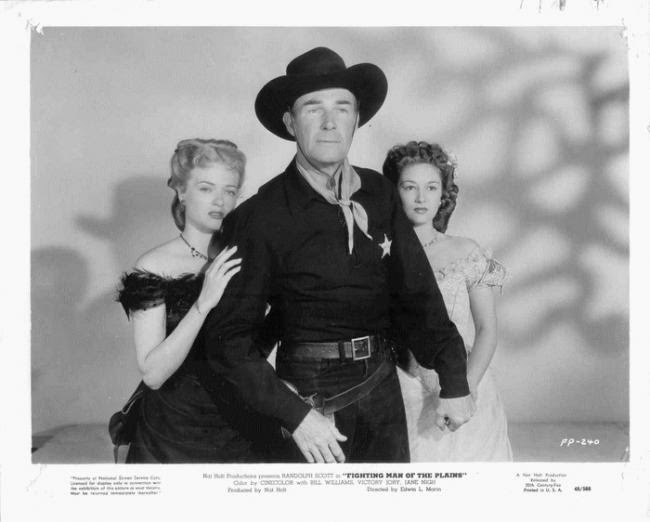 Which gal will get him? He decides in the last minute of the movie.
A curious feature of the movie is the big build-up given to a virtual unknown, the 26-year-old Dale Robertson, in the part of Jesse James.  It’s little more than a cameo (he only appears twice, 55 minutes in, and for very short times) and it was Robertson’s (credited) screen debut and first Western. In reality, of course, Jesse James was not a participant in the 1863 Lawrence raid (he was only 15) but since when have minor inconveniences such as reality got in the way of a Western yarn? Dale was being groomed for stardom by Fox. He does a decent enough job as an affable Jesse, it must be said. 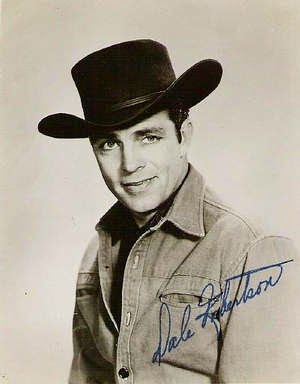 Debuting Dale is Jesse
The director for Fox was Edwin L Marin so the film is competently done. He’d directed Wayne in Tall in the Saddle and had already directed Randy in two oaters, Abilene Town and Canadian Pacific, and would go on to do so again in Colt .45, The Cariboo Trail, Fort Worth and Sugarfoot.


The movie was digitally remastered in 2012 and looks nice now, shot in Cinecolor by Fred Jackman Jr. and it has quite stirring Paul Sawtell music. Paul Fix was a co-writer and plays a small part, as Yancey. Randy triumphs, beats the bad guys and gets the girl. Jory may be unfortunately good but he has a derringer. So all’s well with the world.