It is rather sad that after a never stellar celluloid career in the saddle whose highlight came early, with the first of Republic’s Red Ryder serial in 1940, Don ‘Red’ Barry slipped rapidly into nonentity status, largely through his irascibility and unpleasant behavior, and the best he could do as a come-back was the really third-rate Jesse James movie he starred in, directed, co-produced and co-wrote in 1954 (so there was really no one else to blame). But then ‘sad’ rather sums up Barry’s life. 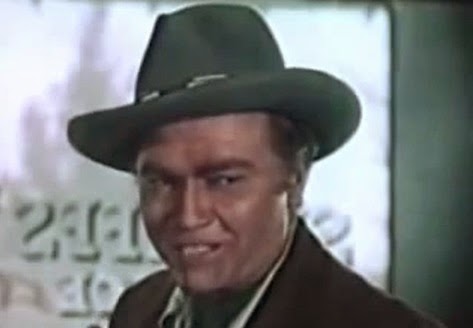 He was rather odd-looking too
Against a background of Yes, we’ll gather at the river appallingly sung as a drone-like dirge, the opening words are Barry’s when he, as Jesse, says, “Cole, Frank, go get it.” So we’re only five seconds in and we know it’s all going to be completely false. As if Jesse James was the big boss man whose hirelings obeyed his bidding like servants (or, more appropriately in the James family’s case, like slaves). It doesn’t improve in historical accuracy from there on. In fact it gets worse.


It is very much a Donald Barry one-man show and this would be OK if Barry were more of a presence, a better actor, had a less silly hat and had a decent script to work from. The surprise in the credits comes when you learn that the screenplay was by DD Beauchamp. Deronda Daniel Beauchamp (pronounced bo-champ), 1908 – 1969, was a great figure of the Hollywood Western, especially the B-Western. 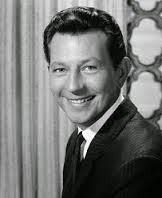 DD Beauchamp the Great
‘Bud’ Beauchamp wrote or co-wrote 131 oaters, for the big screen and TV, between 1947 and 1972. Most were pretty low-grade fodder but there were highlights, like the quite classy 1953 Glenn Ford picture The Man from the Alamo and the not-too-bad 1955 Kirk Douglas Western Man without a Star. In 1954 he worked on Universal’s Destry remake, another Audie Murphy flick Ride Clear of Diablo (one of Audie’s best) and the John Payne/Dan Duryea vehicle Rails into Laramie, as well as Jesse James’ Women. He must have been overridden by Barry on the last one; the low quality of the script makes that evident. By the way, it is my (untested) belief that Saul Rubinek’s character WW Beauchamp, the dime-novel writer in Clint Eastwood’s Unforgiven, was a homage to Deronda Daniel, or, as I prefer to think of him, Daniel Deronda.


Anyway, where were we?


Texas-born Barry sounds like a cheap gangster more than a Westerner, but I suppose that was appropriate in playing Jesse James. Still, I wish he hadn’t adopted a smug grin as his acting style.


One good thing: there are two derringers. “You’re pretty handy with that pop gun,” Jesse tells the saloon whore, and a gambler pulls one while getting away with his ill-gotten (through cheating) gains. Saloon gals and gamblers - classic derringer users. 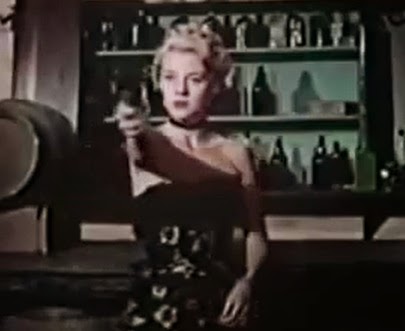 Saloon dame with derringer. Classic.
“We invented train robbery,” Cole Younger (Sam Keller) says at one point. No, Cole, you didn’t. That honor would have to go to the Reno brothers who, in 1866, held up the Ohio and Mississippi Railway near Seymour, netting $16,000. Michael Carr gives us a bolshie Bob Ford, who appears to be a leading gang member. In fact the acting by everyone is C-movie bad. Of course, even good actors wouldn’t really have been able to overcome such lousy dialogue. 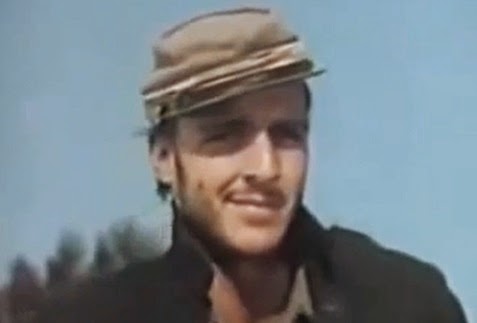 Bolshie Bob
Jack Buetel is Frank and when you have seen him as Billy the Kid in The Outlaw you know that Buetel might have won an acting contest if matched with a block of wood but it would have been a close-run thing. 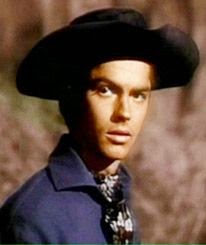 The worst Frank James ever?
Universal hopeful Peggie Castle is the saloon dame. In 1949, Ms. Castle was voted Miss Classy Chassis by members of the United Automobile Workers Union from seven Western states. Wow, what an honor. There’s a celebrated fight between Peggie and her rival, Cattle Kate (Betty Brueck), an even more distasteful version of the Destry Rides Again one. You get the impression that Barry salaciously relished it. The two gals also have a showdown gunfight in Main Street in the last reel but it fizzles in anti-climax. 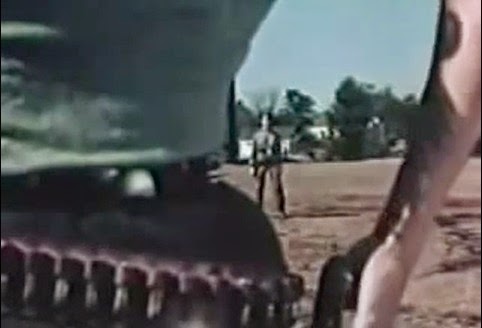 The ladies face off
The whole movie is far too long. There are two bad songs we have to sit through.


There’s a prize fight supposedly under Queensberry Rules, which didn’t come into use in the US until 1889. 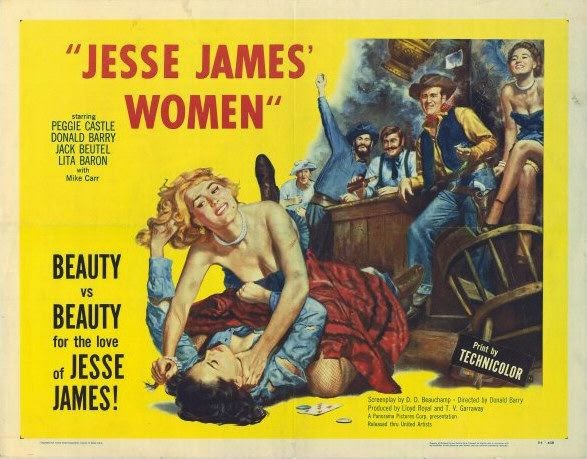 Skip it
The photography and sound are poor.


At the end Jesse gives money to a parson.

And there is very dodgy use of the apostrophe in the title.


Really, this is complete junk, and one of the worst Jesse James movies ever. That’s quite an accolade, given the quality of many of the B-movies which centered on the James legend. I advise you to steer well clear of it, e-pards.