The Legend of the Lone Ranger (Universal, 1981)

Brian Garfield, éminence probably quite grise of the guide to Western movies, was, along with many other critics, dismissive of The Legend of the Lone Ranger in his wonderful 1982 book Western Films: A Complete Guide, my vademecum. “Too violent and gory for tykes and too stupid for grown-ups,” he says, it is a “witless melodrama”. So don’t hold out too much hope if you watch it. But actually, I think Mr. Garfield was being a bit harsh. If you are a dyed-in-the-wool Lone Ranger fan, i.e. a normal human being, I think you’ll quite enjoy it. I thought it was reasonable fun, anyway.

It wasn't that bad
The plot follows more or less that of the 1949 pilot with Clayton Moore and Jay Silverheels, Enter the Lone Ranger. It therefore tells of evil Butch Cavendish and his cruel slaughter of Texas Rangers, and how Tonto saved John Reid who became the masked avenger of his Ranger brother, and foiled Butch’s fiendish plots. It is a bit more grown up than the late 1940s one and contains the odd naughty word but that would appeal to the average 1980s small boy anyway. Someone says about President Grant, “I’d like to piss on him” and Grant calls Cavendish a “diseased son of a bitch”, so that’s quite rude, I suppose. As for the blood and gore Garfield criticizes, it’s very tame by 21st century standards and indeed hardly even noticeable today.


This version tacks on a bit about the Lone Ranger’s childhood. His ma was killed in an attack by bandits on their ranch and a sympathetic Indian boy (Tonto, of course) took orphan John away on his horse to live and grow up with his tribe. There young John Reid (he was never named as John in the radio, TV or earlier film Lone Rangers but the name has stuck since) learns how to shoot a bow and so forth (a skill he sadly does not profit from later in life, or in the movie anyway). John and Tonto become blood brothers, in those innocent days of yore. There’d be a health warning these days on cutting yourself with a dirty knife and mingling your blood. Don’t try this at home, kids.

They meet up as children
This early part (and the closing) happens during the performance of a cheesy ballad, The Man in the Mask. Cheesy ballads were considered obligatory in Westerns in those days. Poor Merle Haggard deserved better. The song is really dire and won a Golden Raspberry award. It was by 007 music creator John Barry, whom Brit producer Lord Grade probably got on board. The rest of Barry’s music is OK, though and even, like the curate’s egg, quite good in parts.


The movie was directed by William A Fraker. Now while I wouldn’t put Mr. Fraker on Mount Olympus alongside John Ford or Anthony Mann or anything, he was a camera operator on The Professionals and director of photography on Paint Your Wagon, he was an associate producer of the 1993 Tombstone, and, above all, he did direct the 1970 Monte Walsh, so, you know, respect. He packs a lot of action into this one, with all the tropes: an attack on a stage, stuntmen running along the top of a train, dynamite everywhere (maybe a quotation of the 1956 Lone Ranger film) and mucho shootin’ and gallopin’. The movie is pacey and rattles along at the speed of a six-up Concord.


Butch is short for Butcher and it is true that Major Bartholomew Cavendish isn’t very nice. In fact President Grant may have been accurate in his description. Butch is played by Christopher Lloyd, the proper Butch Cavendish, Glenn Strange, having died in 1973 and being thus unavailable. 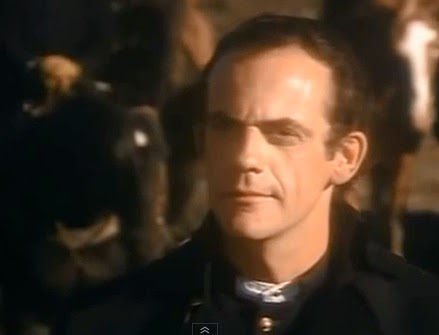 Butch(er) Cavendish
Grant is played by Jason Robards, clearly enjoying himself, and we enjoy his performance. 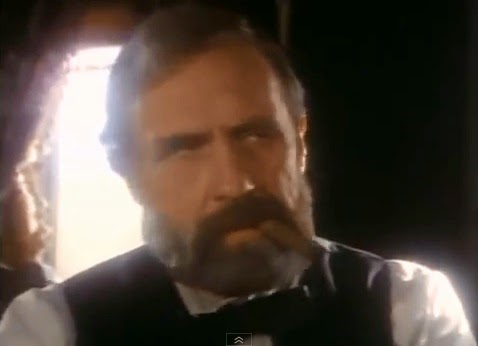 President Ulysses S Robards
On his presidential train (a proper Western train of the kind that is sadly rarer and rarer in modern Westerns, though there are two in the 2013 The Lone Ranger) he has as drinking companions General Custer (Lincoln Tate), Wild Bill Hickok (Richard Farnsworth) and Buffalo Bill Cody (Ted Flicker). I’m surprised Wyatt Earp, Jesse James and Billy the Kid weren’t aboard, and wonder how they missed the train. 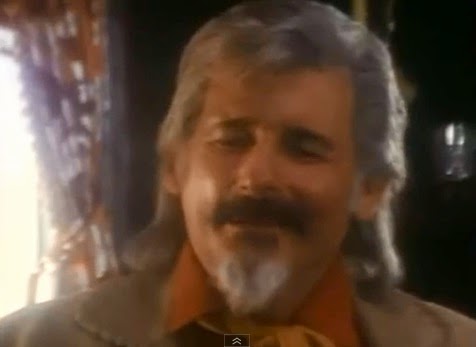 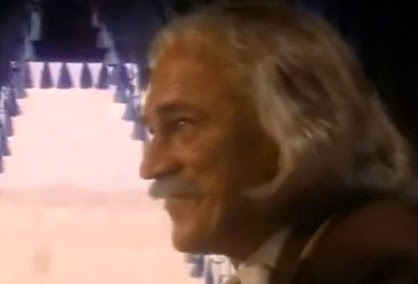 Hickok
There’s a girl, natch. Amy (Juanin Clay) is the newspaper editor’s niece. The editor in question is John Hart, who of course was himself behind the Lone Ranger’s mask for the 1952/53 season and whose character’s name, Striker, is a tribute to the LR’s creator, Fran Striker (arcane must-know info for Lone Rangerists everywhere). Striker campaigns against lawless Cavendish and so the gang come and break up his press and hang him. Amy then decides to continue her uncle’s crusade alone. The as-yet unmasked John Reid, now grown, is a well-read lawyer who meets Amy on the stage. When the stage is attacked, Reid saves her by his bravery from a fate worse than death or, er, death, and he greatly admires Amy. You can see it’s mutual. But they only kiss. You know, the film isn’t that adult. 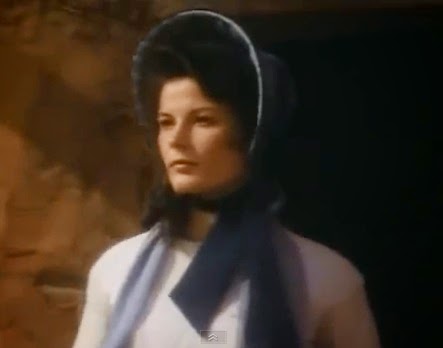 The Lone Ranger's love. He deserts her, though, in favor of Rangering.
When the Rangers, led by John’s brother Dan (John Bennett Perry) and including John as a deputy, pursue the malefactors, Butch has prepared a cleverly-laid trap for them, including a Gatling gun. The Rangers walk their horses into a dangerous canyon (doh) and the good guys are duly slaughtered. 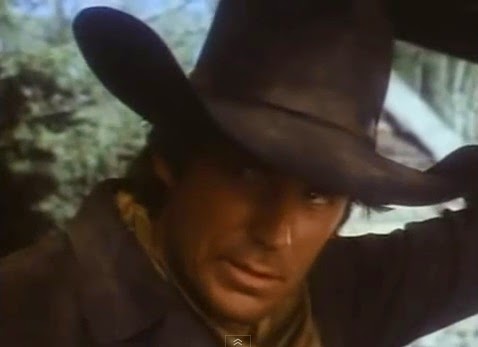 Brother Dan, captain of Texas Rangers
Now a grown Tonto appears and realizes from an amulet that one of the corpses is (a) his blood bother Kemo Sabe (trusty scout) and (b) not quite a corpse. John is nursed back to health by the standard Indian method of herbs and chants, you know how they do.


We get all the malarkey about the silver bullet and the other (equine) Silver. The metal silver, you see, is a symbol of justice and purity. Or something. John finds and breaks Silver the wild white horse but luckily all in slo-mo so the bronc is much easier to ride. When John mounts the tamed Silver and puts the mask on, suddenly the trumpets of the William Tell overture sound, there’s a cry of “Hi Yo, Silver, away!” and the Lone Ranger is born. It makes your heart glad.

I wonder what Clayton and Jay thought
The Lone Ranger himself is one of the snags of this picture, unfortunately. In the 2013 version, The Lone Ranger, they had a deliberately rather bland Lone Ranger because it was a Tonto picture and a Johnny Depp vehicle, but I think in the 1981 one the weak Ranger was an accident. He is played by Klinton Spilsbury, not a name I know, and indeed I believe it is Mr. Spilsbury’s only film. His voice apparently was so squeaky that his part had to be redubbed with that of James Keach (which is quite macho). The acting is weak too, though, and when he puts the mask, big hat and tutu on he just looks camp. On the set he was allegedly so obnoxious that whenever he left, workers used the famous final words of the radio and TV shows, and of this movie, “Who was that masked man?” only they didn’t say man.


Tonto, the equally unknown Michael Horse, is a bit better. Mr. Horse, whose birth name was Michael Heinrich (not quite so Native American, perhaps), is apparently an artist and actor and has appeared in other epics since this one, mostly on TV. At least in his part as Tonto he doesn’t listen meekly to the Lone Ranger’s orders to do the dirty work and reply, “Me do,” as poor old Jay Silverheels had to. 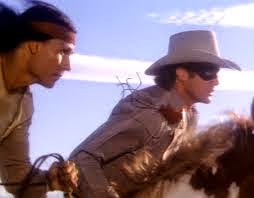 Gallopin'. Mr. Horse looks very like Mr. Silverheels in this shot.
Other Lone Ranger arcana: Bonita Granville, in her last film, is in it (as “Woman, uncredited”). She was the wife of Jack Wrather, producer of the TV series. She had been in the first The Lone Ranger movie, in 1956, as villain Lyle Bettger's wife. I tell you this on a strictly need-to-know basis.


The worst thing about the movie that instead of pulling a derringer when cornered, as he had properly done in the 1947 version, Butch Cavendish uses a knife. That isn’t the same at all.


There are Monument Valley locations, though.


OK, I know the film bombed and was lambasted, and won all sorts of ‘worst movie’ awards, but my opinion (which counts, you know) is that it really isn’t that bad. It's about like the 1958 one, The Lone Ranger and the Lost City of Gold, in quality, but updated for the 1980s.

I would have preferred Clayton and Jay but Moore was 57 and did his last screen Lone Ranger in 1958 and Silverheels was 59 and last climbed into the saddle in 1973.

I may be easy to please as far as Westerns are concerned but I thought it was quite a lot of fun. And where else are you going to get a final shoot-out in which President Grant lights dynamite fuses and Wild Bill Hickok, General Custer and Buffalo Bill stand together and shoot bad guys?