David Belasco (1853 – 1931) was an impresario, director and playwright from San Francisco. Throughout his long career, stretching from the 1880s 1930, Belasco either wrote, directed, or produced more than 100 Broadway plays including Hearts of Oak, The Heart of Maryland and Du Barry, making him one of the most powerful personalities on the New York City theater scene. He is perhaps most famous for having adapted the 1898 John Luther Long short story Madame Butterfly into a 1900 play with the same name and for writing The Girl of the Golden West for the stage in 1905: both were turned into operas by Giacomo Puccini (1904, 1910). More than forty motion pictures have been made from Belasco’s works. 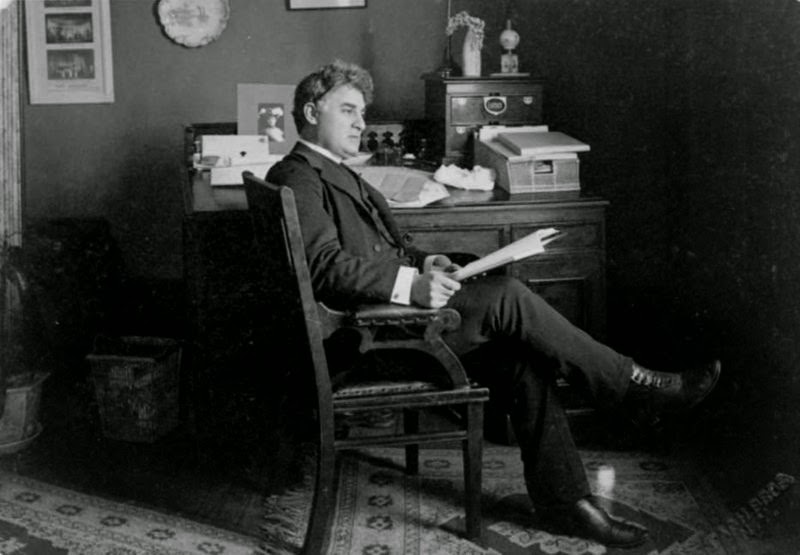 David Belasco
Belasco’s parents had moved to California at the time of the gold rush and he was brought up with tales of striking it rich, gold camps and Indians. This all contributed to the four-act melodrama which opened at the old Belasco Theatre in New York on November 14, 1905 and ran for 224 performances. Blanche Bates first took the role of The Girl, Robert C. Hilliard played Dick Johnson, and Frank Keenan was Jack Rance. The play toured throughout the US and Belasco wrote a novel based on the play (what we would today call a novelization) in 1911. 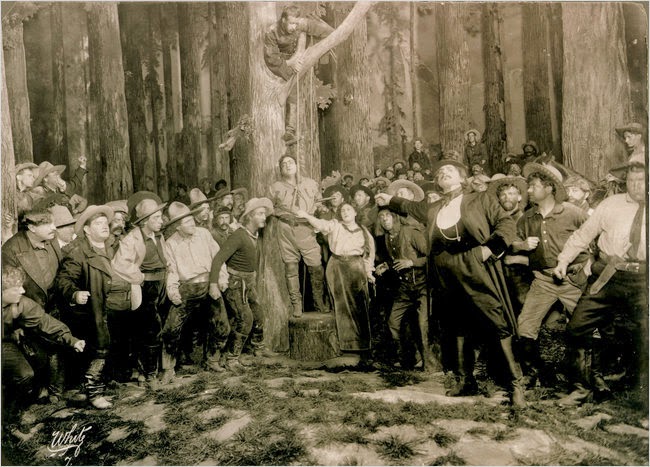 1910 production
Giacomo Puccini saw the play in New York in 1907, and was entranced. He immediately decided that it should be turned into an opera. Carlo Zangarini and Guelfo Givinni began work on a libretto. La Fanciulla del West, the first piece to be commissioned by the Metropolitan Opera, premiered at New York in 1910, with Belasco as stage director and a stellar cast of singers: Toscanini conducted; Enrico Caruso, Emmy Destinn and Pasquale Amato sang the leads; and Puccini, alone in his box, surveyed the scene. It was received very well. 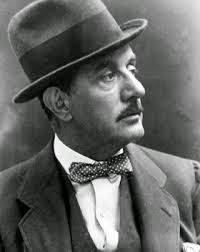 Jack Puccini
The Girl of the Golden West was made into four films: silent movies in 1915 and 1923, a talkie in 1930 and a Jeanette MacDonald/Nelson Eddy musical in 1938. The opera has been given many times since and remains one of Puccini’s finest, if perhaps underrated works. 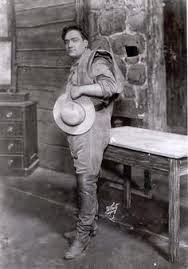 Caruso as Dick Johnson
I haven’t seen the play or managed to track down its script but I have read the novel and seen the opera, so let’s have a quick look at those.


The novel starts with a quotation from an Early History of California:


In those strange days, people coming from God knows where, joined forces in that far Western land, and, according to the rude custom of the camp, their very names were soon lost and unrecorded, and here they struggled, laughed, gambled, cursed, killed, loved and worked out their strange destinies in a manner incredible to us of to-day. Of one thing only are we sure - they lived!


We are on a stagecoach bound for Cloudy Mountain Camp, California, in about 1850. An uneducated country girl is on her way back to the saloon she runs from her first trip to a big town (Monterey) when a handsome Spanish-speaking stranger gallops up and gives her a bunch of syringa. She is entranced by him. We are told that:


All that her frank and easy manner suggested was that she was a child of nature, spontaneous and untrammelled [all the spelling is that of British English, for some reason] by the dictates of society, and normally and healthily at home in the company of the opposite sex.


"And you like Monterey?"
"I love it! Ain't it romantic--an', my, what a fine time the girls there must have!"
The man laughed; the Girl's enthusiasm amused him.


The dashing caballero is Ramerrez Bartolini, heir to a once-great, now impoverished estate. His dying father tells him that he has been a bandit for the last three years, because of his determination to get back at the hated Americanos, and dad obliges the young man to swear that he will continue marauding. Ramerrez reluctantly consents.


The scene now shifts to The Polka, the big saloon in Cloudy owned by The Girl, where the opera, and probably the play, opens (the initial events being referred to but not enacted). 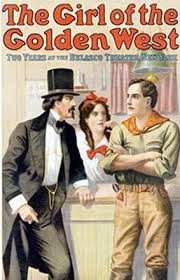 The play
We meet the various characters, like the barman Nick, the crooked faro dealer The Sidney Duck, the miners Sonora, Trinidad and the others. Of course there are songs, and Jake the minstrel comes in (in blackface in the opera). A young Belasco had heard the singing of minstrel Jake Wallace in a mining camp in Nevada and never forgot it. There is one tune, the 1853 Stephen Foster song Old Dog Tray, highlighted:


How often do I picture
The old folks down at home,
And often wonder if they think of me.
Would angel mother know me,
If back there I did roam?
Would old dog Tray remember me?


Puccini does an especially wonderful job with this fairly corny song, making it lyrical, moving and triste. 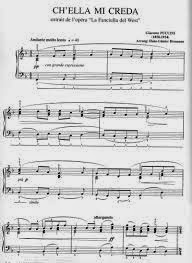 The score emerged as arguably Puccini’s most subtly written and boldly modern music. In place of those typical Puccini melodic outbursts that grab you and won’t let go, this ingenious score folds refined lyrical strands into a nearly through-composed musical fabric.

A handsome stranger, Dick Johnson from Sacramento, comes to the Polka. He is treated with suspicion because he is a new face, because bandits are in the area and the miners keep their gold in the Polka. But he is especially disliked, by Sheriff Rance in particular (Rance loves The Girl), because he pays court to the saloon owner. Of course Minnie has immediately recognized Johnson as Ramerrez. 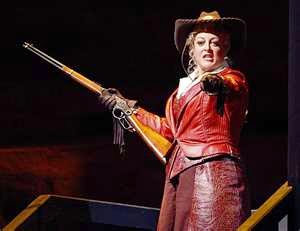 Those who play The Girl are not always slim fanciulle...
There’s a Wells, Fargo agent on the trail of the bandit chief and a Pony Express rider appears with a message for him (which is a bit odd for 1850 but never mind). There’s a racy girl named Nina Micheltorena who seems a bit of a floozy and The Girl wonders if Ramerrez has dallied with her (he has). The miners form a posse and set out in the winter cold to search for the road agent. Rather dashing, don't you think?
The scene shifts to The Girl’s cabin up on Cloudy Mountain where Johnson/Ramerrez daringly comes to visit and even spends the night – chastely, of course but still it was all rather racy for the early 1900s. Ramerrez declares his love for The Girl and willingness to give up banditry and go away with her, and she gets her first kiss. Sweet, isn’t it. They have an early lovers’ quarrel when jealous Minnie finds out that Ramerrez has consorted with la Micheltorena. Ramerrez leaves but is caught by the posse and shot. He returns to the cabin wounded and Minnie hides him. The scene where Rance comes, discovers Ramerrez and plays cards with The Girl for him is quite gripping. Ramerrez is going to get the noose or a wedding ring, depending on the way the cards fall. 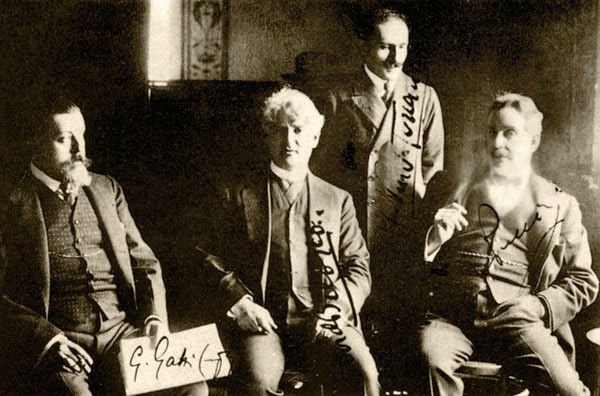 Met general manager Giulio Gatti-Casazza, director David Belasco, conductor Arturo Toscanini and Giacomo Puccini
The saloon and cabin scenes are very similar in the novel and the opera. But in the novel the last scene shifts back to the Polka, whereas in the opera we have an outdoor set where Ramerrez, who has been caught, is to be hanged. It’s all very dramatic, as befits an opera, as the bandit’s fate is finally decided. In the novel, it happens ‘off’ and is rather less climactic. The novel has a curious scene of an improvised classroom in the saloon where The Girl is the schoolmistress and the miners, who are there to learn their basic letters, behave like naughty schoolboys. It didn’t work for me and isn’t in the opera.


Melodrama, that’s the only word for it, I’m afraid. With opera, of course, that’s half the point but the novel comes across now as hopelessly dated, not to say corny. It’s an interesting read but not a subtle one. Characters are rather one-dimensional. Musically, however, it is a delight and the music washes lyrically over you (if you like that sort of thing, and I do).


Puccini’s loved the American West. In 1890 he saw William F. Cody’s Wild West spectacle in Milan and wrote enthusiastically to his brother, about "a group of North Americans with a quantity of Indian redskins and buffaloes that perform splendid shooting tricks and truly represent scenes from the frontier.” He later wrote, “For this drama I have composed music that, I feel sure, reflects the spirit of the American people and particularly the strong, vigorous nature of the West. I have never been West, but I have read so much about it that I know it thoroughly.”

In appropriately Western style The Girl has a pocket pistol and while in 1850 this would have been a single-shot flintlock gadget, in some productions she has a proper derringer. Hooray! 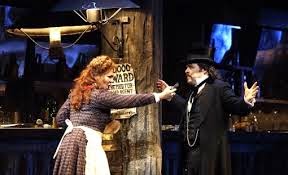 At that range a derringer could hurt
Sadly, however, in most productions of the opera there are no horses. Puccini wanted them and there were ten in the first performance. What's a horse opera with no horses?