On this blog we have looked at the (real and celluloid) lives of many famous figures of the old West: lawmen like Wyatt Earp and Bat Masterson, outlaws like Jesse James and Billy the Kid, colorful figures like Wild Bill Hickok and Buffalo Bill Cody, General Custer and Sitting Bull, and even lesser lights like Al Sieber, the Reno brothers or the Doolin gang.


But we have never talked about one of the most celebrated and notorious of all the gunmen, John Wesley Hardin. 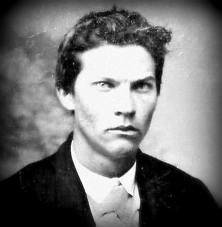 John Wesley Hardin
We can redress that oversight now, though, because I have just re-read a book I bought in 2008, the one many regard as the definitive biography of the Texas gunfighter, John Wesley Hardin: Dark Angel of Texas (University of Oklahoma Press, Norman, 1996) by the El Paso writer Leon Metz. 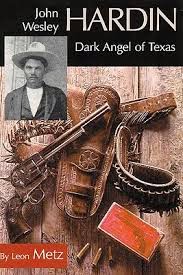 Solid, reliable
It is a curious fact that Americans, then and now, like to elevate to the status of bold hero men who were psychopaths and serial killers. But they do. And perhaps not only Americans. If the homicidal man (it’s always a man) in question didn’t have positive aspects to his character, well, we invent them. That’s how Jesse James and Billy the Kid became heroes. These men were in fact very unpleasant murderers, often (in the case of Hardin and James anyway) killing for racist reasons, in anger, for greed or just because they could. But they become “social bandits” in the Marxist credo. They help the poor and are protected by them. Excuses are invented: ‘he was only defending his community against the grasping railroad company’ was a common one. “He’s a good boy really,” their mothers say.


The worst of them, Hardin included, hypocritically put on a mask of virtue to justify their actions. “I never killed a man who didn’t deserve it,” he said, as if he were by right an Almighty judge. “I only killed bad men,” he said, as if that makes it somehow alright. 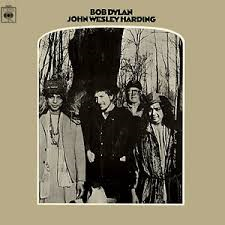 One of my favorite Dylan albums
As Bob Dylan sang, on one of his greatest ever albums:


It was nonsense, of course. Hardin killed plenty of honest men and there is no evidence whatever that he was “a friend to the poor”. Furthermore, though these appalling gunmen claimed that they only killed an opponent “in a fair fight” (that excusing all, of course) often they did no such thing, being perfectly willing to shoot people to death in the back, from hiding or in any other way they could gain an advantage.


The song goes on:


I don’t know where Chaynee County is and Hardin certainly did not take a stand with his lady by his side. In fact he was a poor husband and father who virtually deserted his family. As for “no charge against him could they prove,” well, he was tried for murder, convicted and spent sixteen years at hard labor in the penitentiary. Still, it’s pointless criticizing Bob Dylan for historical inaccuracy! He was singing a great song of his own poetic creation, as if it were one of the old gunfighter ballads. But it does show the adulation that Hardin and other serial killers were accorded, and even still are in certain quarters. 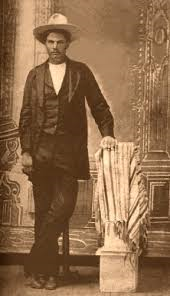 JW Hardin posing in Abilene
Because he wrote an autobiography, John Wesley Hardin’s history of homicide is better known than that of most of his contemporaries. However, his own account of his life was unfinished, rambling, and full of important gaps and prevarications. We do not know how many people he murdered because he claimed ‘credit’ for some deaths he did not cause and omitted others which we know he did. Even the number of victims can be the occasion for a rather morbid interest, the ‘notches on the gun’ syndrome. Mr. Metz keeps a running tally for most of the book, even though it is a doomed effort because impossible to keep the count accurate. The most we can say, finally, is that the number of people Hardin destroyed might have been as “few” as twenty and could have been as many as fifty. Either way, it is a horrendous total.


Hardin himself, of course, was finally shot to death in a squalid saloon in El Paso at the age of 42, and you can’t help but think that it was a fitting end. 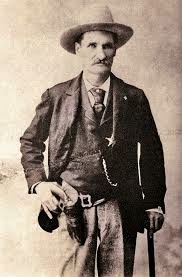 John Selman Sr., the man who killed JW Hardin
Part of the bloodletting came from the feud culture in east Texas where Hardin spent his youth. In the Reconstruction era many Southerners felt themselves without the protection of the law. The Texas Rangers, many of whose members had enlisted to fight for the Confederacy, were disbanded in 1870 and replaced by a Texas State Police force (1870 – 73), which was hated by many white ex-Confederates or Confederacy supporters. Some of the police’s members were black, which in itself was simply unacceptable to Hardin and those like him. The Rangers were recommissioned in 1873 but under Leander H McNelly were guilty of ruthlessness, intimidation, inducing confessions by torture and summary executions. In any case there were rarely more than a hundred of them. In this climate, it was considered acceptable to “take the law into your own hands” and if a member of your family or a close friend was slain, you had the perfect right – indeed, the duty – to avenge that crime and kill the guilty party or even an innocent member of the guilty party’s entourage.


John Wesley Hardin was admired by many for killing Union soldiers, Mexican vaqueros, the “Negro” Mage (Major Holshousen), black state policemen and an Indian. These people “deserved” it. His dexterity with firearms, especially his ability to twirl revolvers on his fingers and perform the “border roll”, was also greatly admired. 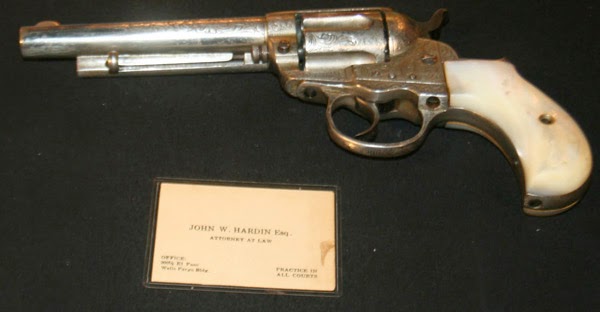 Hardin's pistol
Mr. Metz deals at some length with Hardin’s confrontation with Wild Bill Hickok in Abilene. Hardin was there having driven a trail herd north at the time that Hickok was marshal, and Hardin openly flouted the no-gun ordinance and was allowed by Hickok to get away with it. Whether Hardin got one over on Wild Bill with a border roll cannot be confirmed but is certainly possible.


Hardin’s murderous career was in fact relatively short. He killed his first man (as far as we know) in November 1868, when he was fifteen, and was arrested and imprisoned in August 1877, so his killing spree lasted nine years. He may have killed or engineered deaths after his release, in El Paso in 1895, but nothing is confirmed there.


In some ways, Metz’s description of Hardin’s last years in El Paso is the most interesting part of the book, perhaps because the author knows the history of El Paso so well (he has also written a life of John Selman, who killed Hardin) and knows the place intimately. Hardin’s final years really come to life.


There have been plenty of novels featuring John Wesley Hardin. Try, for example, James Carlos Blake’s The Pistoleer (Berkley Publishing, 1995), which is of course an imaginative rendering of his life but is clearly based on such facts as are known. Hardin has also appeared in movies, played by various actors, but these are miles away from the true Hardin, sometimes about as far as you can possibly get. The excellent Western actor John Dehner first played JW Hardin, in The Texas Rangers (the 1951 George Montgomery one), then Rock Hudson in the frankly rather silly The Lawless Breed in 1953. 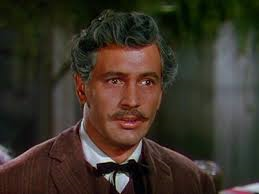 Rock
Jack Elam, no less, was a burlesque JWH in Dirty Dingus Magee in 1970,

Jack
and David Busse is to play him in the forthcoming The Hard Ride, currently in production.

On TV, Richard Webb was Hardin in the inevitable episode of Stories of the Century in 1954. 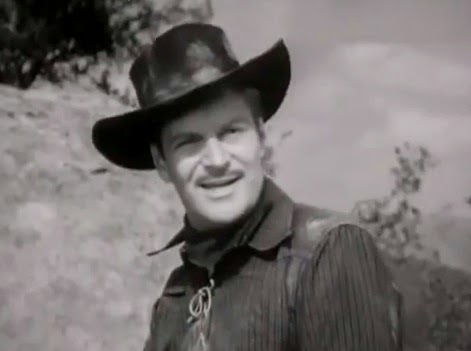 Richard Webb on the trail to Abilene

Of course it was Matt Clark who arrested Hardin, in Abilene, after Hardin had shot and killed 'Marshal Corbin' (no sign of Hickok). When the life of Hardin was so jam-packed with shootings and other crimes, why they had to invent totally new fictional ones is a mystery. Looking back on it, Stories of the Century really was a pretty bad show. And anyway, what are "official" newspaper files?

Hardin also appeared in episodes of Judge Roy Bean in 1956 (Lash La Rue!), Studio One in Hollywood in 1957 (Richard Boone, that’s more like it), The Life and Legend of Wyatt Earp in 1955 and '57 (both played by Phillip Pine), Bronco in 1958 (Scott Marlowe), Tales of Wells Fargo in 1957 and '58 (Lyle Bettger, who probably caught the charm and charisma that Hardin was said to have had), James Griffith in an entertaining 1959 episode of Maverick, 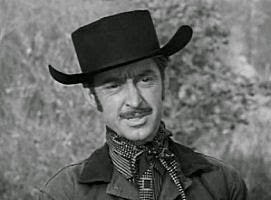 James Griffith in Maverick
Brad Johnson in 1959 in Zane Grey Theatre, Neville Brand (good old Neville) in Death Valley Days in 1962, Charles Bronson in Vacation Playhouse in 1965, and Randy Quaid in Streets of Laredo in 1999.


Metz’s biography, taken with the autobiography (The Life of John Wesley Hardin, As Written By Himself, Smith and Moore, Seguin, Texas, 1896, modern edition with an introduction by Robert G McCubbin, University of Oklahoma Press, Norman, 1961) and the letters (The Letters of John Wesley Hardin, Transcribed and Compiled by Roy & Jo Ann Stamps, Eakin Press, Austin, Texas, 2001) will give you as accurate a picture as you are going to get of the life of the criminal John Wesley Hardin (1853 – 95). 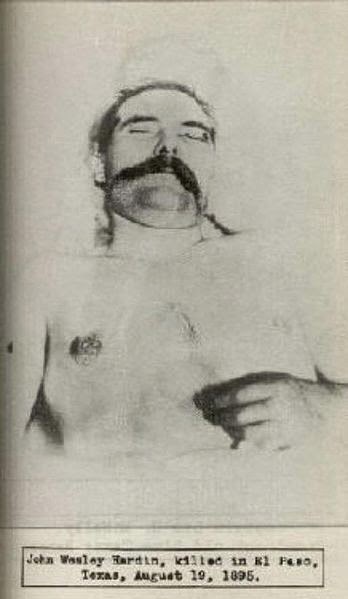