Many place names have figured in the titles of Westerns. Certain places have a magic ring to them. States, of course, especially Texas but also Arizona, Nevada, Wyoming, in fact any state of the West has appeared as a title at one time or another. Towns, too. Wichita, Abilene, Dodge, Tombstone, naturally, but also Albuquerque, Fort Worth or Laredo. But none was more popular than Santa Fe. Put santa fe in the titles search box of IMDb, refine for the Western genre and you will get literally dozens of titles. The most famous were probably Warners’ 1940 Curtiz/Flynn movie Santa Fe Trail, followed by Columbia’s 1951 Randolph Scott oater Santa Fe. Of course Santa Fe is a charming town, and as the capital of New Mexico and finishing point of The Santa Fe Trail it exercised a fascination for decades over those interested in Westward expansion. 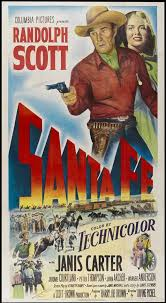 Worth a look
Scott’s Santa Fe was a Columbia effort and better than some of the Fox and Warners Westerns he had done. Not that it’s a great Western in the vein of John Ford, Anthony Mann or Sam Peckinpah. Like most Scott oaters, it’s an enjoyable B-Western with zip and pzazz. 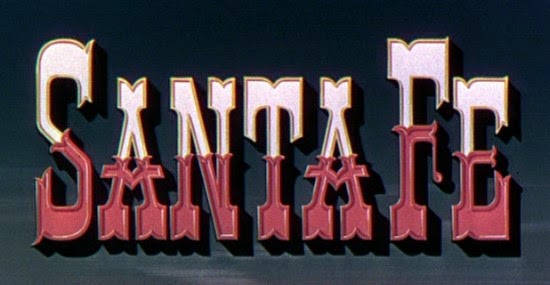 Nice color
It’s another railroad picture. Randy had already enabled the Canadian Pacific to cross the Rockies in '49 and the year after Santa Fe he was to build a railway from Carson City to Virginia City. Scott had of course trained as an engineer; perhaps it was that which attracted him to railroad-building Westerns. This time Randy is track boss of the Atchison, Topeka & Santa Fe (AT&SF) and determined at all costs to drive his line Westwards through Kansas, Colorado and down into New Mexico. 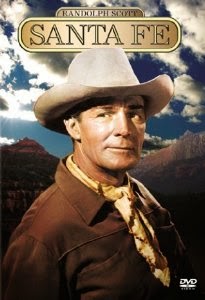 Available on DVD
Naturally he has to face the opposition of outlaws, Indians and the rival Denver and Rio Grande but by grit, courage and resourcefulness he will, like the true Western hero he is, win out.


The plot also has a Rage at Dawn/Love Me Tender tinge to it as there are four brothers, one of whom (Randy) follows the straight and narrow railroad track while the others can’t get over the defeat of the South, and go bad. As well as Randy, who plays Britt, the other Canfields (formerly rich Virginians, now destitute) are Tom (Peter M Thompson), Clint (John Archer) and young Terry (Jerome Courtland). Of course among the Reno brothers Clint was the honest one. One of the boys has rather groovy bells on his hat, rather like the bells on the spurs of the pals in South of St. Louis. This was Thompson’s second Western. He was only in six, all Bs, and a few TV shows. Courtland had started in The Man from Colorado in 1948, acted with Scott in The Walking Hills and in all was in eight Westerns and a lot of TV episodes of this and that. But neither Thompson nor Courtland was a Western actor of note. 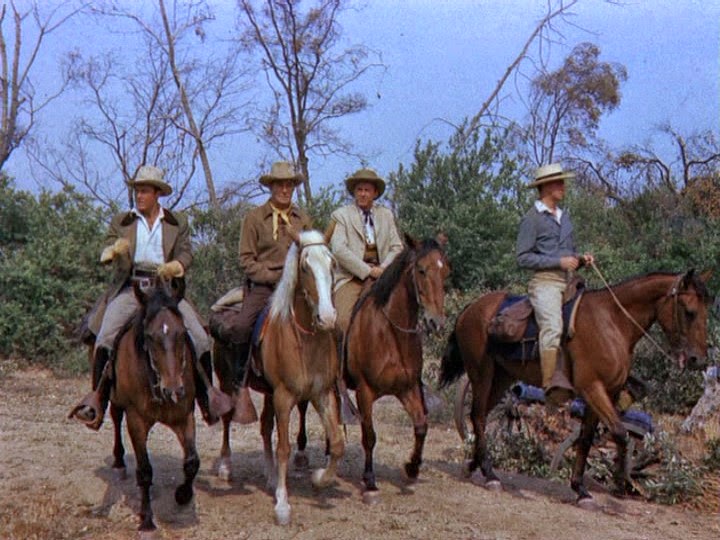 The four brothers, a bit Reno-ish
John Archer, on the other hand, was a stalwart character actor in Westerns. Amusingly, he was born Ralph Bowman but won a competition with a contract in the name of John Archer and so went from being a Bowman to an Archer. He was in some pre-War B-Westerns, then in Colorado Territory, High Lonesome and Best of the Badmen before Santa Fe. Later on he was in The Big Trees and pretty well every TV Western you care to name from the mid-1950s to a 1968 episode of Bonanza, his last appearance in the saddle. He’s always good to see. 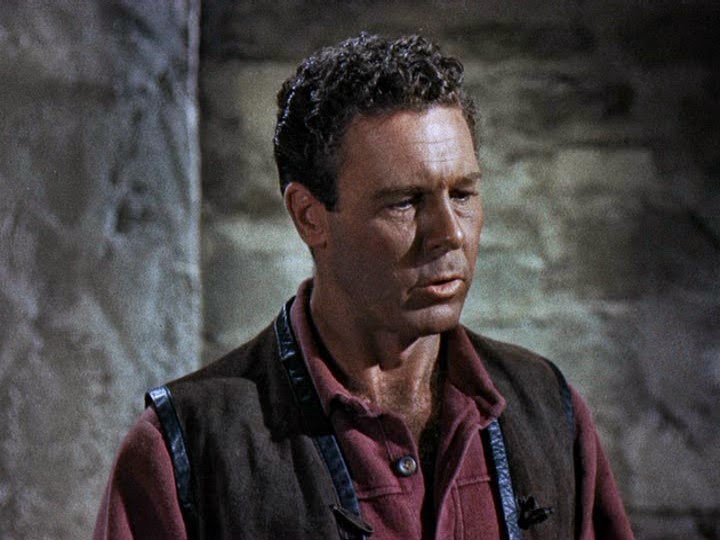 From Bowman to Archer
The outlaw Canfields gather around chief badman Cole Sanders played by Roy Roberts – you’ll recognize his stocky frame. Although known as a TV comedy actor he was in a lot of Westerns. Jock Mahoney (who also did many of the stunts) is one of his thugs and there’s an amusing bit where Randy runs Jock out of camp with a wheelbarrow.


The love interest is the railroad paymistress (Janis Carter), whose Union husband was killed in a charge Scott’s character led in the war, so she is a priori antagonistic, but she comes round, obviously, and true lerve blooms. She was only in three Westerns. She’s OK, I guess. Railroad man Dave Baxter is Randy’s rival for her hand, played by good old Warner Anderson, who usually played army officers, judges and the like but was excellent as the cowardly trooper with Gregory Peck in the Gordon Douglas-directed Only the Valiant the same year as Santa Fe. 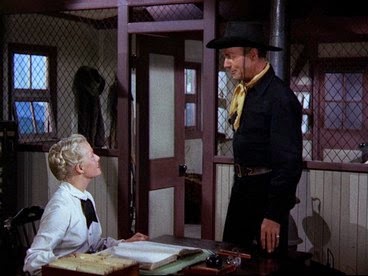 Randy romances Janis
Paul E Burns is entertaining as the fiddle-playing Dick Wootton up on the Raton Pass. Burns was everywhere in Westerns and always fun, from Jesse James in 1939 to The Adventures of Bullwhip Griffin in 1967, 115 Western appearances in all. Actually, the fiddle-playing in Santa Fe is great. They have a contest of three champion fiddlers and Uncle Dick wins.


Billy House and Olin Howland provide entertaining comic relief as the engineer and fireman on the locomotive Little Buttercup, and there’s an amusing exchange of seniority and roles. There’s almost something of Laurel and Hardy about them.


Best of all, though, in the cast of support actors is Frank Ferguson as Bat Masterson! Excellent. I do like Frank. Forget Peyton Place and My Friend Flicka for the moment; concentrate on the host of small parts he played in Western movies, often as sheriff, judge or townsman. That craggy face, walrus mustache and sad hound-dog look!


As usual, the Indians are there to be portrayed only as dangerous simpletons, which isn’t enjoyable. Westerns with a more serious and credible depiction of Native Americans were beginning to come out in the 1950s but hadn’t yet impinged on B-pictures like this one. 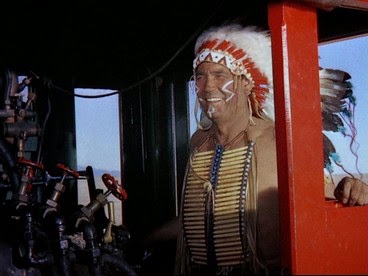 Rather embarrassing
The movie was directed by Irving Pichel (pronounced to rhyme with Mitchell). I had to look him up. Pichel was an actor, in 70 films from 1933 to 1953. As such, he was popular on the set of Santa Fe as he knew what actors wanted from a director. He directed 38 movies but only one Western (which is why I didn’t know him). He does a very competent job, I must say, with the pace of the action maintained and some half-interesting character development, as far as an 87-minute B-Western allowed, anyway. He also takes a small part in the movie. Pichel was, by the way, the voice of the narrator on She Wore a Yellow Ribbon. Fascinating fact, huh.


The film was shot in Technicolor up on the Iverson Ranch near Los Angeles and on location in Arizona, by Charles Lawton Jr., a most experienced Western cinematographer who did nine Randolph Scott oaters (including three of those excellent late-50s Budd Boetticher ones), three for Delmer Daves and Two Rode Together for John Ford. He knew what he was doing, alright.


The original music is by Paul Sawtell and it’s lively, energetic and fun. 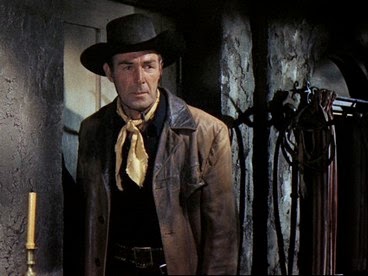 Randy good as man trying to forget the past
The movie was a Scott-Brown production. As I’m sure you know, Harry Joe Brown formed an alliance with Randolph Scott and they produced a series of cracking Westerns for Columbia.


The following year, 1952, Paramount’s railway picture Denver and Rio Grande came out, and very good it was too. It’s interesting to note the similarities in the plots of Santa Fe and D&RG. They both feature the Royal Gorge railroad war. In real history, the AT&SF hired a Dodge City gang under Bat Masterson to go to Colorado to impede the D&RG from laying track along the narrow gorge from Durango to Silverton (a great train ride you can still take today, by the way). In Santa Fe, though, Frank Ferguson as Bat doesn’t get to go. Instead, Randy sends some railroad men up there, including a couple of his brothers. But the two railroad companies soon kiss and make up. By the way, the Royal Gorge railroad war features in my first Western novel Fight Back. Thought you’d like to know.


I like Santa Fe. It scores well on the SOS (Scott Oater Scale) for its action, pace and (rather silly) plot. Kenneth Gamet was not, I fear, the brightest and best of Western screenplay writers but the novel he adapted, James Vance Marshall’s Santa Fe: The Railroad That Built an Empire, seems to have been fun (though I haven’t read it) and Gamet doesn’t do badly this time at the characterization. At least the different players emerge as distinct people.


And trains are always good, aren’t they, from The Iron Horse to Union Pacific, Whispering Smith, Denver and Rio Grande, Kansas Pacific and a whole lot more. The plot also has something in common with those telegraph pictures like The Telegraph Trail and Western Union: you know, nation building, crossing the continent and all that. As the last line of Santa Fe has it, "As the railroads grow, so will America!" 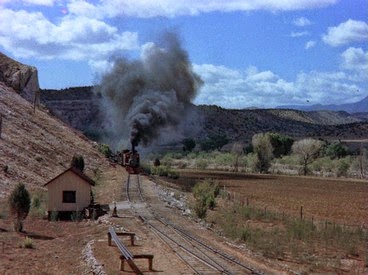