A fiddlefoot, that is a drifter, a man with itchy feet who can settle to nothing, often appears in Luke Short novels. That figures: the Western hero is often a fiddlefoot. Loners rarely travel from one place to another in Westerns, they usually drift there. The notion of the drifter is central to the great Western myth. In a story serialized in The Saturday Evening Post in March/April 1946, later published as a standalone novel by Houghton Mifflin in 1949, Short elevated the word fiddlefoot to the book’s title. 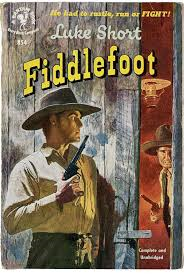 It’s one of Short’s better efforts (though in fact they were all good). The fiddlefoot in question is Frank Chess. His long-suffering girlfriend Carrie, the judge’s daughter, has waited five years for him as he drifted about the West. But now Frank’s abusive stepfather is dead, possibly murdered, and Saber, the ranch, is Frank’s. So will he settle down there, marry Carrie and become a rancher? Well, pigs might fly.


He loves Carrie all right and wants, in a theoretical way, to settle down with her. The trouble is that during his driftin’ years he got into some shady business with the horse trader Rhino Hulst. He wore a 2nd lieutenant’s uniform and impersonated an Army horse-buyer in a scam Hulst and his henchmen had going. It was lucrative, too, and worked well, but it has troubled Frank’s conscience and now he tells Rhino he is quitting. That doesn’t suit Rhino at all and he blackmails Frank into staying, then signing over half of Saber to him or he will go to the law and tell Carrie. 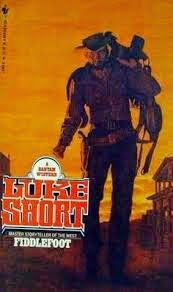 Short is very skillful with his portrait of Carrie. He makes her steadfast, loyal, pretty – what’s not to like? And yet she is essentially condemnatory, like her father judgmental. Whereas Tess…


For, as is traditional in Western stories, there are two women. Often there is a ‘straight’ one, probably the better bet for marriage, and a racier one with zip and charm. That’s Tess. She is vibrant, beautiful and a bit of a fiddlefoot herself. She understands Frank. So who will he end up with?


Ah, for that you will have to read the book. But I can reveal that Short handles it subtly and one of the women is essentially a tragic figure. 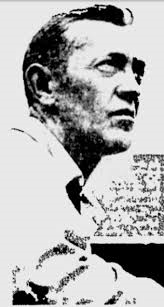 There is much skullduggery, ridin’ and shootin’. There is a lot about horse driving and trading; interesting it is, too. Short was knowledgeable about the working ways of the West but he wears his learning lightly and it’s enjoyable but not intrusive.


There are some good minor characters. As usual when I read a Luke Short that wasn’t filmed (and a good number were) I imagine some of my favorite actors in these parts. Randolph Scott will have to be Frank, of course. No one else will do for the lone drifter with guts, and he suited B-Westerns to a (tall) T. I think Marguerite Chapman for Carrie – not posh exactly but beautiful, ladylike and just right for the steady judge’s daughter. As for Tess, we could go for a wild card like Linda Darnell but I prefer Virginia Mayo. I know she would normally have taken the steady lead part but after her Colorado in Colorado Territory I can see her as the passionate one with a twinkle in her eye.


Buck Hannan is the sheriff. He suspects Frank of his stepfather’s murder and is a friend of Rhino’s, so a danger for Frank, but he is also fundamentally decent. Ray Teal? Edgar Buchanan?


As for the bad guy, we are spoiled for choice. Unblinking blond nazi like George Macready in Coroner Creek? No, we need more of a smiling dissembler who dupes the townsfolk into thinking he is a good guy. Dan Duryea? Maybe a bit over-the-top. Robert Ryan would be ideal, if we could get him. Good with the smile but essentially a thug underneath.


His henchmen can be Leo Gordon, Jack Elam and Robert J Wilke. Wow, what a crew. 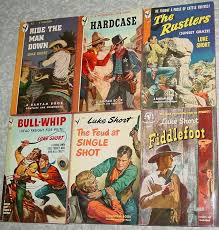 See, I have it all mapped out.


But it was not to be and is most unlikely to be now. So you’ll just have to enjoy the book instead. You won’t be disappointed.


Now I have to leave you. Gotta drift.