More a Civil War drama than a Western, Cold Mountain is still a very good picture that has Western tints.


As is often the case these days, the stars are far from obvious choices for Western or nineteenth century American stories. The protagonists of this one are an Australian and a Brit, the director is English and there are actors of various nationalities in supporting roles. I don’t object to this by any means. The actors are so professional and so convincing with their accents these days that as soon as you get past the recognition of Nicole Kidman or Jude Law or other actors (the same problem any star has) you accept them as 1860s Carolinians or whatever. Think of Russell Crowe and Christian Bale in the 3:10 to Yuma remake, Peter Mullan in The Claim, or many others. These actors are entirely convincing. Directors like Anthony Minghella or Andrew Dominik understood the American movie and made good ones.


The novel Cold Mountain came out in 1997. It was written by Charles Frazier, born in North Carolina, MA from Appalachian State University, PhD from University of South Carolina. He knows the Carolinas. Dr. Frazier’s book, set in the Civil War, is wonderfully atmospheric, deeply researched and utterly convincing. It is beautifully, almost poetically written and above all it captures the atmosphere of that time and that place. The film had a hard act to follow. 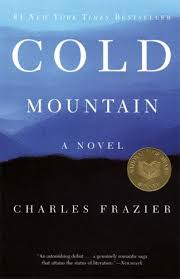 Fine novel
That was especially true because the book is essentially about two people who have barely met (“I hardly even know her,” says Inman, wonderingly), who are then separated by war and spend most of the novel yearning to be together again but remaining apart. Cold Mountain is really an odyssey, a book about a long and perilous journey home, and the protagonists only come together again at the end. Their development as characters, as people, happens while they are apart. That isn’t the ideal scenario for a star-vehicle film. 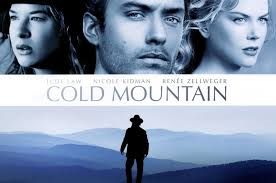 Star vehicle
But it works. Law as Inman is outstanding as, to begin with, the gauche, shy carpenter who meets the beautiful lady from Charleston, and Kidman (Ada Monroe) is equally good as the lady who loves but is too well brought up to flirt. She is very blonde, slightly fey, luminous. There’s almost a Last of the Mohicans (1992 version) vibe about the relationship. Then Law’s Inman goes off to war and suffers such horrors, and Kidman’s Penelope-like Ada is left alone (her father, played by Donald Sutherland, dies in the garden, she frees her slaves, she can afford no laborers) to manage a farm about which she knows nothing, or starve. 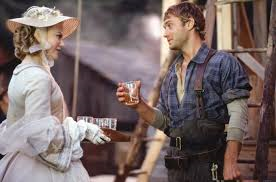 First meeting
The set-piece of the Battle of the Crater in the Siege of Petersburg is extraordinarily rendered. In July 1864, the Federals mined Lee’s position and caused a huge explosion. General Burnside’s soldiers charged wildly into the bomb crater. The Confederates under General Mahone regrouped, formed round the crater and started firing with rifles and even artillery down into it in what was cruelly described as a “turkey shoot”. Grant said it was “the saddest affair I have witnessed in this war”.


The character of Inman is based on a real person, Frazier’s great-great-uncle William Pinkney Inman, a private in Company F of the 25th North Carolina Infantry, who did indeed survive the battle, was wounded twice, then deserted the ranks to return to Cold Mountain in western North Carolina, where his grave still lies.


The narrative alternates between the lives of Inman and Ada, and the film echoes that, flitting between short scenes in a way I found too much, though I suppose it does at least emphasize the separation. On his journey Inman encounters all sorts of strange people and survives many dangers. Particularly well done in the movie are the episodes with the old crone in the woods (Eileen Atkins, very good) who shelters and doctors him, and gives him words of deep wisdom, and Sara, the chaste siren war widow with a baby (Natalie Portman, excellent). The late Philip Seymour Hoffman is also outstanding (as he always was) as a rascally corrupt preacher whom Inman at first chastises and then befriends. 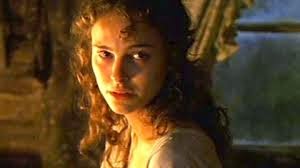 Portman as chaste siren
But the character who really dominates is the earthy Ruby, and indeed Renée Zellweger won the awards that were going. The film was nominated for seven Oscars and eight Golden Globes, and Zellweger won the only ones, for Best Supporting Actress, in both contests. She is amazing as the clodhopping young farm woman who comes to Ada’s rescue. The relationship is finely handled as the two women develop from an almost (though not quite) servant/mistress relationship, through teacher/pupil into (chaste) love. 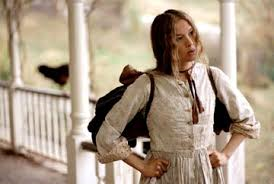 Zelweger outstanding
Also very fine is the picaresque, almost Dickensian character of Ruby’s father, the musician Stobrod Thewes, played by Dubliner Brendan Gleeson, who was in another semi-Western with Kidman, Far and Away (1992) and whom I remember best as the gangster hitman of In Bruges. He is an extraordinarily talented actor.

Brendan Gleeson as the Dickensian Stobrod Thewes
The music, in fact, is one of the best aspects of the film. The credits are absurdly long these days and it is hard to find significant contributors but hidden in the monstrous list under ‘music department’ you find ‘Executive music producer, T-Bone Burnett’ and any movie with his name there will be superior. He was responsible for one of the few admirable features of the dreadful Heaven’s Gate in 1980 and in the non-Western arena think of Walk the Line or O Brother, Where Art Thou? Stobrod has discovered a gift for violin and some musical partners to play with him some haunting, beautiful Appalachian tunes. There is a fine part in the film where the appalling vigilante ‘home guard’ commander Teague (brilliantly played by the excellent Ray Winstone of The Proposition) recognizes a tune and faintly sings along before nevertheless passing to an act of disgusting brutality.

Ray Winstone as Teague
Moronic male brutality is really the central theme of this anti-war picture. The soldiers on both sides, as well as the peripheral gunmen like the so-called home guard are base murderers, torturers and rapists. Rare are the men of any sensitivity or who despise war (Stobrod is one). It is the women who hold society together, at their huge cost. 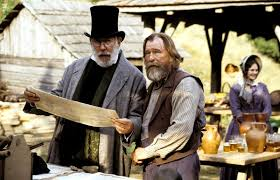 
Cold Mountain is a magic, atmospheric film with certain weaknesses, sure, but a worthy cinematic version of a fine novel.