The Crossing by Cormac McCarthy

On page 383 of The Crossing by Cormac McCarthy (Alfred A Knopf, New York, 1994) we have the essence of the book (and maybe all McCarthy books):


A man came to the door and stepped out onto the gallery. Quién es? he said.
Un viajero.
Cuántos son ustedes?
Yo sόlo.


Let’s look at this little passage. We see first lots of Spanish (or spanish as McCarthy would call it). The story is set mostly in Mexico and the writer makes few allowances for those who don’t read that language. In my case my Spanish is exiguous but my Italian isn’t bad and I can more or less follow. (If you can read Dante you can read McCarthy). Cormac does at least make things easier by putting the conversation in context and often paraphrasing:


That defeated me until I read the following paragraph:


He watched them. The cranes were moving south and he watched their thin echelons trail along those unseen corridors writ in their blood a hundred thousand years.


Cranes do in fact appear as a symbol quite a few times. They are described, poetically, as journeying they know not why, they know not where, but they go. The hero of The Crossing (and in a way its predecessor All The Pretty Horses) does too. Billy Parham is a traveler, alone. Even when he is riding with his younger brother Boyd he is essentially alone.

In this sense McCarthy stands in a long tradition, from Homer and Bunyan to Calvino. He is the traveler, el viajero, il viaggiatore una notte d'inverno. 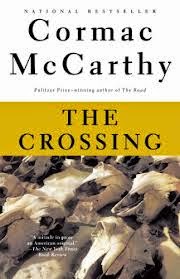 We also notice from the passage first quoted the idiosyncratic McCarthyan (lack of) punctuation. He eschews inverted commas for speech and most (though not all) apostrophes. You get used to it.


The deceptively simple style, especially when narrating violent events, sudden drama related prosaically, reminds you of Hemingway but it alternates with lyrical poesy, landscape and wildlife in particular being described with glowing, soaring phrases of great beauty.


In the evening he heard again the cranes overhead, passing high above the overcast, balancing beneath them the bight of the earth’s curve, earth’s weather. Their metal eyes grooved to the pathways which God has chosen for them to follow. Their hearts in flood.


The alliterative b, the literary device of repetition of earth, the ‘sentences’ without finite verbs all make you feel you have strayed into a volume of poetry. It’s a rich style, intense, even flowery at times, yet contrasted with the short-sentence declarative action it is curious and curiously attractive. It is in fact the language of the desert, spare and arid yet containing great beauty.


The Quién es? makes you think Western. The last words of Billy the Kid (and a young Billy from New Mexico is the central character of The Crossing) add to the Western aspect of the tale. Set in the early 1940s, it is nevertheless almost pure Western as Billy rides lonesome (and horses are central to the story), is ready with a firearm and does what a man’s gotta do. There are few fences and roads. It’s a past world he rides through. 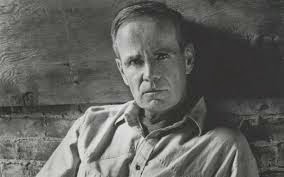 All the trouble comes, as it did in the first volume, from horses and the theft of them and stealing them back from those who stole them. This leads to mayhem and death.


But this time, women too. A clear example of Billy’s crossing over is when he sees a traveling opera singer bathing naked in a river.


Her hair was down and it was wet and clinging to her back and it reached to the water. He stood frozen.


She opened her eyes and saw him there on the bridge and she turned her back and walked slowly up out of the river and was lost to his view among the pale standing trunks of the cottonwoods and the sun rose and the river ran as before but nothing was the same nor did he think it ever would be.


The Crossing is the second part of McCarthy’s trilogy of the same name. I remember when it came out. I had been so taken with All The Pretty Horses that I couldn’t wait for the paperback and bought it immediately in hardback. Like many readers, I suspect, I was expecting to read the further adventures of John Grady Cole but my disappointment didn’t last long, once I was gripped by the new character, Billy Parham.


There are remarkable similarities. In some ways it’s almost a rewrite. A young American, sixteen years old, crosses from the United States into Mexico and from adolescence into adulthood. Riding into Mexico he loses his way in every sense. That’s basically it. That’s what happened to John Grady.


This time he’s from the Animas Valley and he is not alone. His young brother Boyd, 14, accompanies him (though in many ways only in body). Still, for much of the journey – or rather journeys, for Billy crosses the border several times – Billy is alone. And lost.

If I say I was slightly less taken with this novel than its predecessor that is not because it isn't a fine book but rather because it has a little less coherence somehow, and the several journeys and different 'stories' (the wolf, the brother, the journeyman jobs) give it less unity.


The first part of the novel, 30% of the book, is the Prokovievian story of Billy and the wolf. It’s extraordinary. And brutal: even Billy, who hunts and catches but comes to admire the wild spirit of the wolf, treats the poor beast with close to cruelty and what it suffers at the hands of others hardly bears reading about. Its final fate is as shocking as it is sudden.

As in Pretty Horses, and indeed Blood Meridian, Mexico is a barren land. Villages are semi deserted and broken down. The people all seem old or dying (or indeed dead). Cruelty and casual violence prevail, though so do generosity and the willingness to share.


The Crossing is more allegoric than its predecessor. There are many plays within the play, characters come upon by chance (or not) who tell stories, some of them too long for my taste, and who deliver peasant philosophy for Billy to ponder. The gypsy with the broken airplane in the closing pages is typical. Some of the tales within the tale border on the mystical and you feel you have strayed from McCarthy into Calvino or even Borges. And we are told


He passed back north through the small mud hamlets of the mesa, through Alamo and Galeana, settlements through which he’d passed before and where his return was remarked upon by the poblanos so that his own journeying began to take upon itself the shape of a tale.


McCarthy’s book reads like musical variations on the theme set out in All The Pretty Horses, as if Blas Galindo had rewritten Copland’s Billy the Kid and produced some cross-border symphony in which pastoral harmony mingles with violent discords. But in the last resort it is bleak, beautifully bleak.