The Dark Horse by Craig Johnson


Walt Longmire rides the range - in a Town Car

The fifth in Craig Johnson’s Longmire series of novels about a present-day Western sheriff in Wyoming, after 2008’s Another Man’s Moccasins, is The Dark Horse (Viking Penguin, 2009). 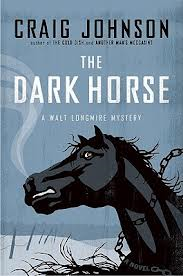 Vol. 5
The reader will have various ideas of who the dark horse of the title is. It could be Walt Longmire himself because in this story he goes undercover to solve a crime. Or it could be the woman who confesses to the crime but who, Longmire is sure, is nonetheless innocent; her actions and motives are more than obscure. Or it could actually be a dark horse: the jet-black mare Wahoo Sue is probably (along with Dog) the star of the story.


At any rate Walt is out of Absaroka County this time, up in Campbell Cty, at the semi-invitation of its sheriff. He’s gone to the one-horse town of Absalom, which allows Biblical digressions into the story of King David’s son, whose fate my pa used to hold up as a warning in the 1960s against wearing long hair.


Walt has a Lincoln Town Car this time. Maybe he thinks he’s Raylan Givens. And he also has a new hat. But neither last. 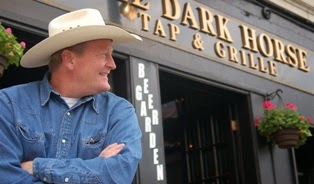 Mr. Johnson about to enjoy a grill(e)
There are the usual Western tinges to a modern crime drama. Especially cowboy is one of the characters, old Hershel, who seems born to the saddle and has an original Yellow Boy Henry, which, like the 1876 Sharps in The Cold Dish, is destined to play an important part in the tale. We are also told that the last time Walt went to the movies was in 1974, to see Ulzana’s Raid, that excellent film with Burt Lancaster as an Al Sieberesque Apache scout. There are, too, references to James Arness, Ken Curtis and The Lone Ranger’s horse Silver. On page 205 of my paperback edition Walt delivers himself of the perceptive line, “No matter what we did to try and form the West, however, the West inevitably formed us instead.”


In the last ‘reel’, as it were, there is an impressive ride down from a great mesa (or butte, depending on your definition) with shootin’ and gallopin’ that could have come out of any oater. True, there is also a brand new red Dodge truck but still.


Mr. Johnson writes well. Sometimes, through Walt, he is astute, even wise.


Unlike bone, once that illusionary magic circle of safety is broken, it can never be completely repaired and is not stronger at the break.


He can also be witty. How’s this for an image?


She released her nose and smiled; she always smiled when she was relaying information like this, the way sharks smile when they see snorklers wearing yellow.


Actually, the snorklers, as opposed to snorkelers, are one of the few solecisms. Most of the prose is impeccable.


Dog is revealed to be part German Shepherd, part St. Bernard, so we can get a better mental picture of him now. My own golden retriever Wyatt is almost as well trained and obedient. But Dog makes Rin Tin Tin look like a dumb mutt.


We are also told a little more about Walt’s parents and youth, so that’s good.


Henry Standing Bear is there of course and he does play a part in the story but much less this time. Walt kinda goes it alone. Undercover. Though his undercover skills are somewhat limited. Vic also only appears tangentially, towards the end, but there is just enough time for a little more consummation devoutly to be wished, in a motel room. Her brother has proposed to Walt’s daughter Cady, back in Philly. Will she take him? Perhaps the next volume (Junkyard Dogs) will reveal. If she does, that might complicate the Walt/Vic relationship somewhat, don't you think? 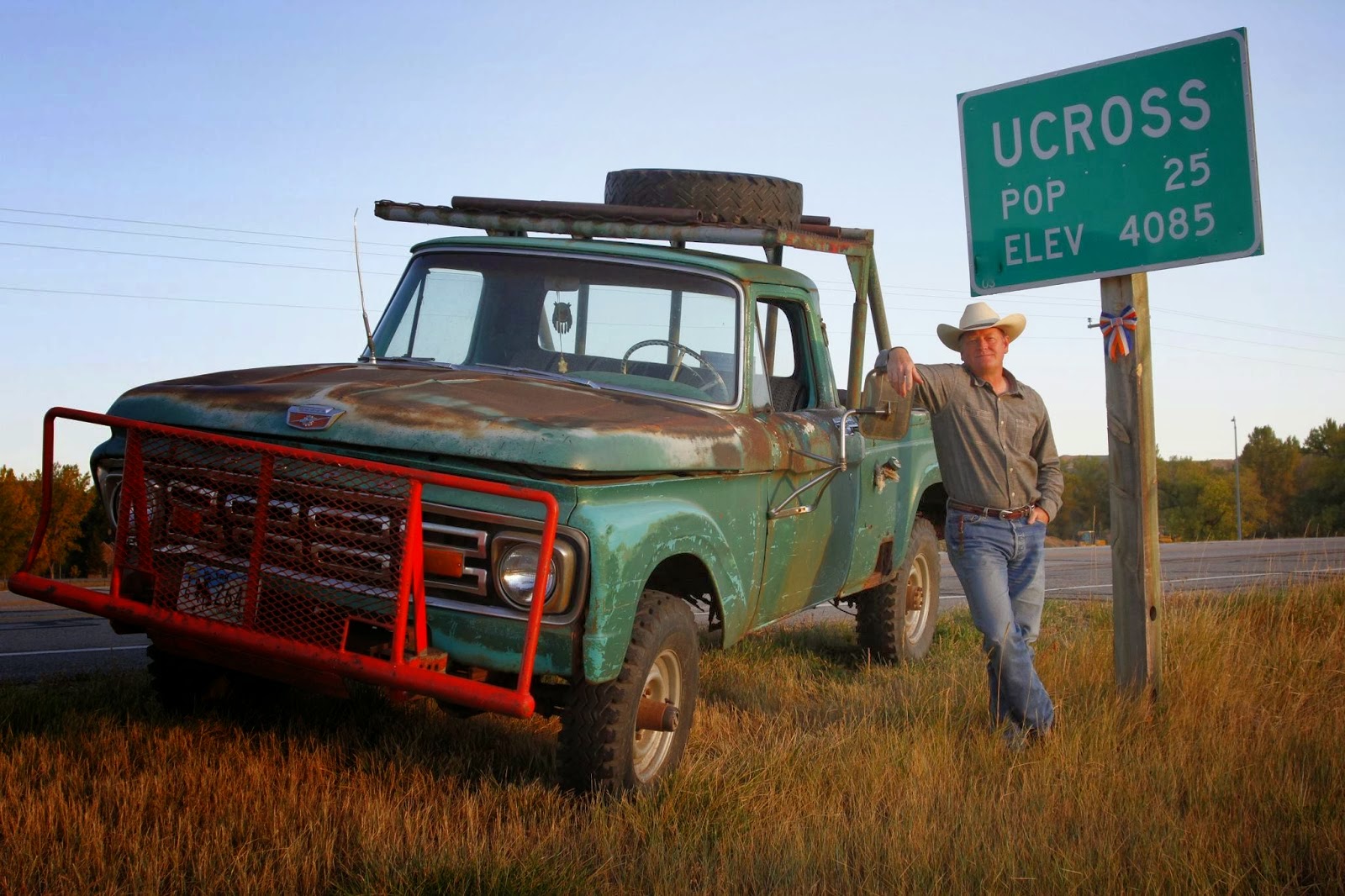 Looks a bit like Henry's truck
Naturally Walt picks up more injuries, this time a smashed-in head and a broken foot. At least he isn’t actually shot this time. I hope he’s well insured. The old German doc Isaac Bloomfield will doubtless patch him up again, as he does in every vol., but by the end of the series I fear that our hero will be plumb full of holes.


The author has said that he would like Gary Cooper to play Longmire in a film. But Coop isn’t returning his calls.


Actually, if I did have a criticism, and being a critic I guess I am allowed, it would be that this time the bad guy is too much of a black hat. A bit of saving grace would have made him a trifle more convincing. But this villain is a tad overdrawn.


Still, it’s a minor cavil. I enjoy these books.