As The Crow Flies by Craig Johnson

Crows don’t always fly in a straight line or the most direct route from A to, well, B. They sometimes circle round C, catching thermals, fly up to nests, D, with shiny things in their beaks, get tangled in string, Z, and, if Ted Hughes is to be believed, even scorch their mother’s ears to stumps. In the ninth episode of the Longmire saga, Craig Johnson's As the Crow Flies (Viking Penguin, 2012), they do all of the above (except the last). 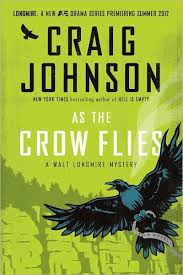 This novel succeeds the 2011 Hell Is Empty, the Dante one, with the e-short story Divorce Horse in between. In both short story and new novel, preparations are still ongoing for Cady’s wedding (it seems to take a lot of preparing) though she finally gets to tie the knot (or anyway ride into a Cheyenne ceremony on Wahoo Sue) at the end of the novel. Divorce Horse is fun, by the way, and tells of an Indian rodeo, a stolen horse and a love affair, as well as the inevitable wedding arrangements. 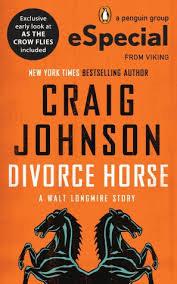 As The Crow Flies is a much more traditional whodunit than the more ambitious Hell and we have a woman who falls to her death from a cliff (the Painted Warrior site Walt and Henry are reccying - if there is such a word - as a possible wedding venue). Walt helps with the investigation into what they assume is a murder rather than a suicide or an accident.


Longmire is not only out of his jurisdiction, as he was when he worked undercover in The Dark Horse, but not even in his own state. He is up on the reservation in southern Montana and he becomes the mentor (the Virgil?) of a new and colorful character, tribal Police Chief Lolo Long. Maybe Walt is still on a semi-leave of absence recovering from his hellish ordeal and thus free to wander, leaving Durant in the hands of Rita & Co. Anyway he seems to have plenty of time to counsel the sexy Lolo and solve the odd crime. Unusually, he is not shot or even beaten up this time, though someone tries to kill him, twice.


Walt even takes a trip of another kind when he takes part in an Indian peyote ceremony and hallucinates. A county sheriff tripping on controlled substances. Daring, huh. 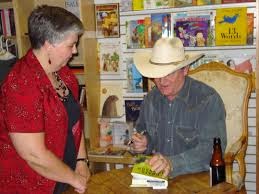 It’s a good story even if you will probably guess who dunit pretty early on.


Cliff Cly, FBI, is back, which is nice.
The best bit is probably the sleezy Jimtown Bar, as near to a proper Western saloon as you are going to get these days. In fact this is a real place. I found this article which described the original Jim and his successors, and the history of the world's largest pile of old beercans. See what Montana has to offer?


There are a couple of serious points made, though. Mr. Johnson is evidently concerned with the post-traumatic stress syndrome affecting war veterans. Two characters suffer from it in this story, one being Lolo, who has been in Iraq, and her aggressiveness and inability to relate even to her own son are clearly manifestations of that. Walt is duly understanding and helpful. The fact remains that one wonders what kind of policing system would allow a hyper-active, in-your-face-aggressive, untrained person with clear psychological issues to hurtle about the place with a huge .44 sidearm which she draws at the drop of a hat. Kinda worrying. She calms down, though, under Walt’s tutelage, and will maybe become a good officer. Maybe.


At one point a Cheyenne character, Mrs. Small Song, sneers at Lolo and calls her a “red snake” for serving “in the white man’s army.” Ms. Small Song ws not polite but did kind of have a point, I guess.


There’s a sympathetic portrayal of Indian life and the problems of Indian society and reservation life. It is clear that Johnson is an admirer of Native American culture and history, even if he doesn’t use that term. I must say that Indians I have talked to do dislike the expression and indeed it is rather absurd – as if those of other family origins born in the USA are not ‘native Americans’. There are also some good cowboy and Indian jokes, my favorite being the Indian lying on the trail with his ear to the ground.


There’s a nice twist on the good cop/bad cop act as Walt and Bear do a good cowboy/bad Indian bit. I also liked Henry’s Red Birney Irregulars, a nod to Sherlock Holmes. Come to think of it, Walt’s powers of observation may not be exactly Sherlockian (or like those of the Mentalist) but he is pretty damn good at noticing things.


Lola (as opposed to Lolo) is back, Henry’s powder-blue T-bird, though Johnson insists on referring to it as a “vintage” car. A vintage car, dear Mr. J., is one made between 1919 and 1930. Lolo is in fact a “classic” car. Never mind. We can’t all be sad-case old-car experts like Jeff. 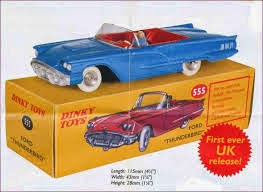 Anyway As The Crow Flies is another good read and was followed by a couple more short stories about which, dear e-pards, I will waffle on another day.