In 1993, two movies were made about Geronimo. Columbia's Geronimo: An American Legend was directed by the excellent Walter Hill and starred Wes Studi as the Apache chief and Robert Duvall as Al Sieber. Click the link for a review. The other, a TV movie made by Turner and aired on TNT in ’93, I watched last night and can tell you about now, if you haven’t seen it.


It’s surprisingly good, in fact. Oh, don’t get me wrong: it’s not a great Western or a leader in the genre. But it is done from the Indians’ point of view, which is refreshing, Native American actors are used largely and there is a ring of authenticity to it. Compared with much of the sugary pap that passed for Western movies on fin de siècle and noughties TV, Hallmark stuff and so on, it has quality. It’s not HBO or Lonesome Dove, we’re not in that league, but it’s not bad. 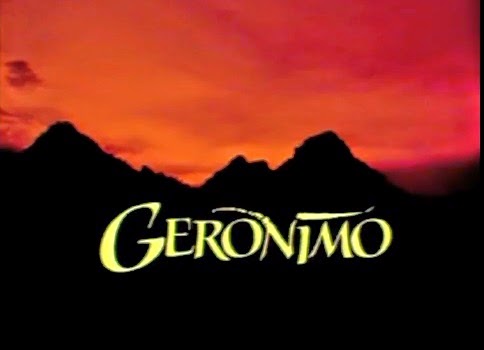 Worth a look
Geronimo stories tend to be shown from the white point of view. They are usually about how brave yet sympathetic white scouts or (US) Army officers bring about his surrender. So it’s refreshing to have one which tells the tale from the Apache perspective, and includes the famous chief’s youth and old age. Of course that doesn’t mean that it’s correct in every detail or even necessarily broadly true to the spirit of the man and his people. Geronimo seems, certainly in old age anyway, to have been a rather poisonous old man whose word was unreliable and who was disliked by many of his own as well as by Mexicans and Anglos who had suffered at his hands. Inevitably, this Geronimo, played mostly by Joseph Runningfox, a Pueblo, with Jimmy Herman, a Canadian of Indian descent, excellent as the older man and Ryan Black, another Canadian, of Anishanabe (Ojibwe) ancestry, playing the youth, is a bold hero with no failings. But maybe that’s fair enough as a valuable corrective. 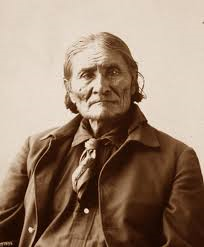 In the movie Geronimo is called by his usual Apache name of Goyaałé, ‘He Who Yawns’, though he is not shown yawning. This may anyway have been a mistranslation or misapprehension. ‘Geronimo’ was of course the name the hated Mexicans gave him, either by the soldiers calling on St Jerome to help them combat the warrior or simply as their mispronunciation of his name.


There are weaknesses. Geronimo is shown as a strategic general, disposing ‘his’ troops and giving commands as to when and where to attack. Apache warfare was more individualistic than that and Geronimo seems to have had a more advisory role. The Indians are all very well washed and have Daz-white clothes, gleaming teeth and very clean hair. I also think that Geronimo’s role as a medicine man and prophesier is underplayed, to make him ‘only’ a warrior. I suppose they had to speak English, not Apache; subtitles might have put some viewers off. 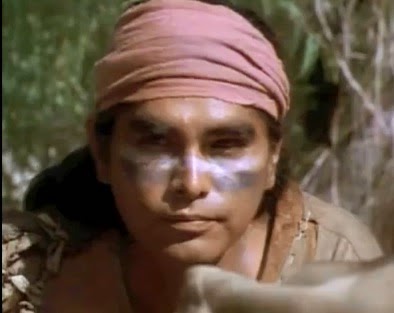 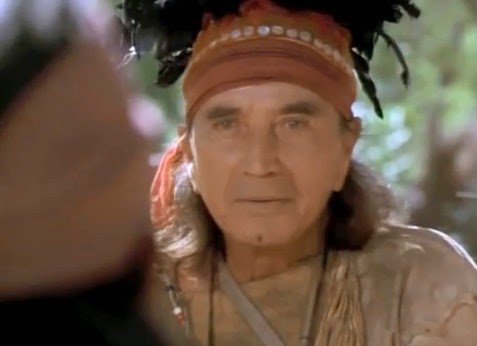 A fine portrayal of Mangas Coloradas 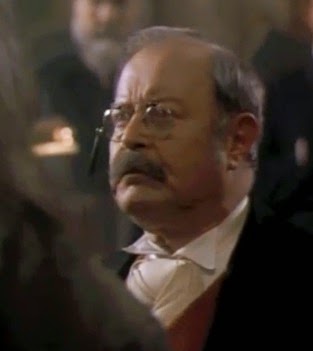 Ray Geer as Teddy Roosevelt
But much is got right. Turner used knowledgeable consultants, “Native American advisor” Michael Darrow and “Historical and cultural advisors” Scott Rushforth, Berle Kanseah and Evelyn Brueninger. Also credited are leading members of various Apache tribes. I’m no expert but I suspect that the costumes were authentic. The characters avoid using each other’s true names, employing that oblique terminology such as “the sister of the one who was your wife” and so on. This is convincing. 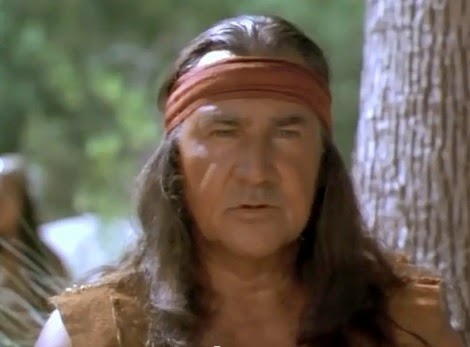 Schellenberg suitably august as Cochise
Noteworthy actors were August Schellenberg as Cochise, Brian Frejo as Geronimo’s nephew Daklugie and the person unnamed in the credits but very good, I thought, the one who played Mangas Coloradas. In his short part Ray Geer was also an impressive Theodore Roosevelt. The greatest honors go to Jimmy Herman for his portrayal of the great chief in the last year of his life. 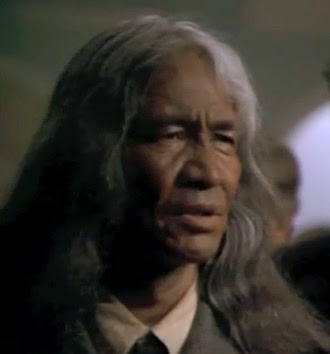 Jimmy Herman superb as the older Geronimo
A pity there was no Tom Horn or Al Sieber but there we are!


Worth a look for anyone interested in the history of the Apaches and the life of Geronimo – indeed, I would say essential viewing.

That's a rather comprehensive disclaimer! 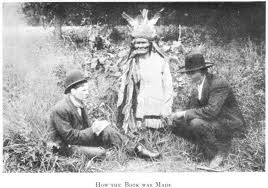