Earl Dwire as the arch-badman. And the most beautiful woman there has ever been. What more could you ask?

Another formulaic Tex Ritter picture, one of many he made for Grand National in the 30s, this one might better have been called ‘Rodeo Racketeers’ because it’s a rodeo movie in which the show is being run by crooks who kill the local stars in order to scoop the prize money, which does seem a little mean. The government is on their trail and sends secret agent Carmen (Rita Cansino) to rumble them. Rodeo star Tex and his sidekick Horace Murphy (no Fuzzy yet) have a special reason for wishing to defeat the gang. They killed Tex's brother, the swine.


There is a lot of early rodeo stock footage, including tribes of Indians in full regalia, some Roman riding like Ben Johnson and Harry Carey in Rio Grande and a rather groovy stagecoach race. Yakima Canutt (as henchman Squint Parker) got third billing, after Tex and Rita, so had full scope for stunts. Earl Dwire, standard Ritter-movie heavy/sheriff and my hero, plays the arch-baddy Barker. That’s why the movie got a two-revolver rating. White Flash, Tex’s horse, gets star billing too, although he doesn’t do much. He’s no Trigger. 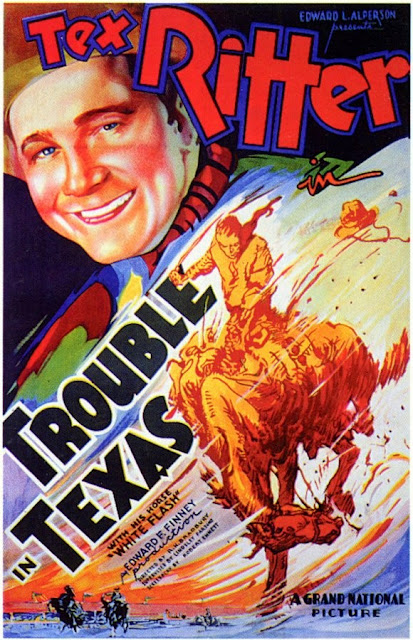 La Cansino is decorative, although one heavy says, “We don’t want no dames working with this outfit” and many of the junior male audience probably agreed. But it was not surprising that Rita was so sensational because Ms. Cansino was in fact Rita Hayworth in an early incarnation. This was long before The Lady from Shanghai or The Loves of Carmen but Rita was shaping up just fine. It is entirely possible that Hayworth was the most glittering Hollywood star of all and the most beautiful woman there has ever been (pace Ingrid Bergman) and she is sure wasted on Tex in this clunker. 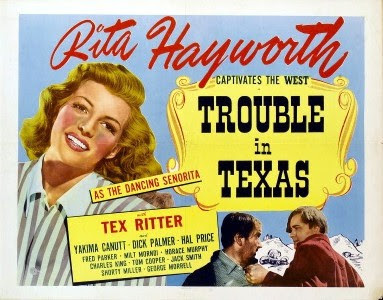 Slightly cheating poster because she wasn't using that name yet


Tex’s make-up is applied with a trowel and his hair is extremely 1930s. He sings lustily with his decent tenor voice but can’t act for toffee. Robert N Bradbury, veteran of all those Lone Star 1930s John Wayne pictures, directed and it was the last full year he worked. He had been directing one- and two-reelers since 1918. Robert Emmett wrote it and he was also very experienced in formula Westerns. The movie races along with no surprises but plenty of action, so it probably does deserve its two revolvers in fact. Yak does a good stunt at the end with the runaway wagon loaded with dynamite (though he didn’t bother to have the same costume as Tex so you can tell it’s not the hero).


Anyway, Tex certainly made worse Westerns than this (some real turkeys in fact, like Arizona Days the same year) but Trouble in Texas is still just about watchable after all these years. And you get to see Earl Dwire.