I am afraid this is a bit of a Tex Turkey. Tex Ritter churned out dozens of singin’ cowboy Westerns through the 1930s and 40s. Most of them were short B-movies and, frankly, not very good. Tex Rides with the Boy Scouts, also 1937, gives you an idea of the genre. Tex himself could sing alright but he was no athlete, didn’t convince as a Western hero and Laurence Olivier he wasn’t. Arizona Days was only his third picture and he hadn’t yet developed what little poise he later managed.


The film is directed by John English, who specialized in The Lone Ranger, Zorro and Dick Tracy pictures, and written by Sherman L Lowe, veteran of such epics as Dames Ahoy! or Burn ‘Em Up Barnes (although he did later write the 1940 Law and Order). The whole team, in fact, was expert at the short, exciting melodramas beloved by young, male audiences at their local movie theaters. 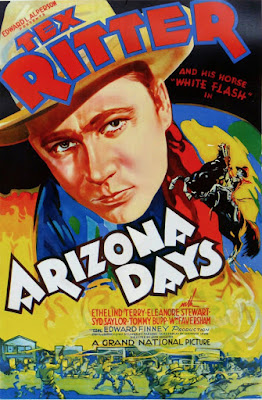 In this movie Syd Saylor is Tex’s humorous sidekick (Tex hadn’t graduated to Fuzzy Knight yet) and although Syd, as Claude Hopper, known by Tex, hilariously, as “Grass”, has a bit of business with a trombone which he thinks he can play but can’t, he generally isn’t funny and so the comic relief doesn't give you any.


Tex and Syd join a traveling show whose wagons are burned by the baddies, so Tex sets out to make some money to re-equip the troupe and gets a job as a tax collector, on 10% commission of everything he takes in. This brings him into conflict with Harry Price (Forrest Taylor), chief baddy and tax delinquent, who had, of course, burnt those wagons. 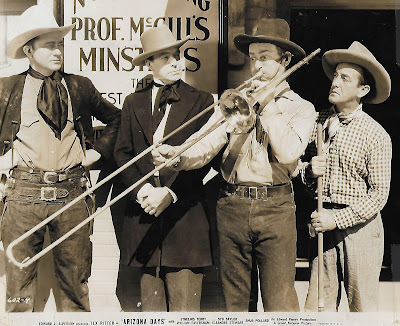 The love interest is Eleanor Stewart, whose little brother is taught by Tex to play the guitar. But the three of them are ambushed and the little boy is killed. That really does it. It’s bad enough mistreating horses but shooting a small boy who is learning the guitar is seriously impolite. So Tex gets his revenge.
Tex has his horse White Flash.


They are in Tombstone, I should have said. Who is the sheriff of Tombstone? Wyatt Earp perhaps, or Johnny Behan? No, it is Mr. Higginbotham. Perhaps this was supposed to be funny? We are not sure.


There is a rather silly shoot-out, the kind where they throw away their guns crossly when they are empty, and Tex, in his Sta-prest pants, wins out. Ho hum.
You could watch it if you absolutely had to.