In the 1930s, John Wayne, in his slightly less than Churchillian wilderness years between The Big Trail in 1930 and Stagecoach in 1939, did a whole series of one-hour black & white programmers, 35 in nine years (so an average of about four a year), sixteen for Lone Star Productions and distributed by Monogram. They were very formulaic, indeed they almost had the same plot, and the acting would make wooden seem a flexible adjective but they were energetic, fun and, I bet, hugely enjoyed by the (usually juvenile) audience of the time. I wasn’t born then (I’m not quite that old) but if I had been I would have been waiting in line outside the movie theater to buy my ticket without a doubt. 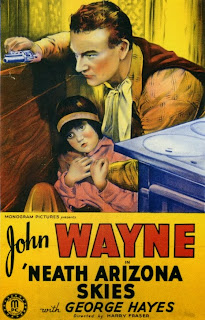 Sheila Terry is the dame in this one. She did a couple of John Wayne oaters in ’34, this one  and Lawless Frontier, and she’d done the semi-Western Haunted Gold with Duke back in ’32 (actually with both Dukes because Haunted was one of those starring Duke the horse). She is decked out in pure 1934 garb. Funny how 30s Westerns had the boys in old-time cowboy costume OK but the girls were in those calf-length flimsy dresses and low-heel shoes typical of the modern era, and frizzy hair to match. 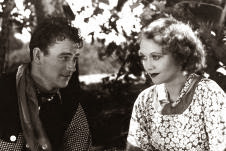 1930s-clad heroine
Still, there’s some excuse this time because it’s set in oil-well time. Duke (not the equine one) is Chris, the guardian of a half-breed child (Shirley Jane Rickert, 8, a Shirley Temple wannabe who later became a stripper in burlesque, but that’s another story), who is heiress to a $50-grand oil strike, and the bad guys, led by Sam Black (Yakima Canutt on fine form) want the child and the loot. 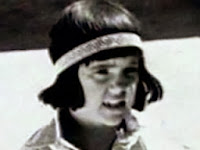 Her future was burlesque. Who knew.
It’s a classic skullduggery Western with rather too much plot that needs explaining as characters talk to each other but Harry L Fraser directed, standing in for the usual RN Bradbury, and Fraser was a B-Western pro (he also did Randy Rides Alone with Duke, truly mighty). He even appears in this one, as ‘Henchman in the brush’. And Gabby Hayes is in it too as the doddery old-timer cook (he was still in his 40s) and pard of Duke. So all’s well with the world. And blow me down, he isn’t credited but if that isn’t the great Earl Dwire as Tom, the real father of the brat, I’m a Dutchman. Earl Dwire, what a hero. 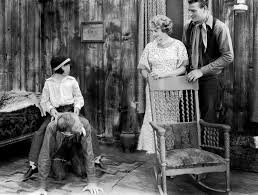 Earl Dwire, left, as horse
Yak does a stunt too, of course, as Sam (Yak) rides off a bluff into a lake followed by Chris (Yak) and they fight it out with a knife in the water. The loser is shown only with sinister bubbles rising to the surface as he meets his watery doom. 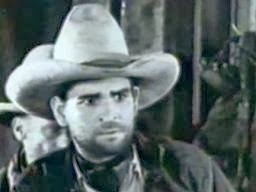