DW Griffith and Christy Cabanne do The Alamo

An early silent feature film made about the defense of the Alamo, this 72-minute epic was produced by DW Griffith and directed & written by W Christy Cabanne. Although it treats Mexicans and Mexican-Americans as dismissively as Afro-Americans were treated in The Birth of a Nation the same year - here Mexicans are all drunken women-molesters and Santa Anna (a seriously hammy Walter Long) is a dope fiend - the movie is impressive in its scope and size and contains some quite sophisticated shooting techniques with close-ups.


Christy Cabanne (1888 – 1950), after Annapolis and the US Navy, became a stage actor and writer, then entered films as assistant to DW Griffith. He wrote and directed movies from the famous Life of Villa in 1912 up till a forgettable Western, Silver Trails, in 1948. He wrote and/or directed twenty Westerns in all (this 1915 one was already his eleventh), of which this one and his 1937 The Outcasts of Poker Flat (the Preston Foster/Van Heflin one) were probably his most famous and best. In later years he was reduced to Poverty Row B-movies but he contributed importantly to the history of the genre. 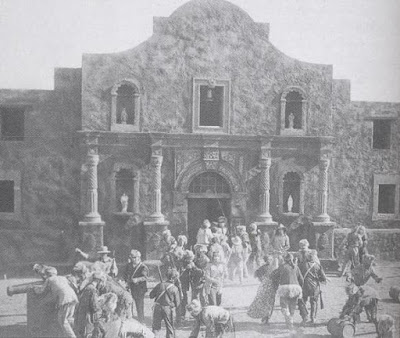 
Martyrs of the Alamo’s large sub-title, ‘The Birth of Texas’, makes explicit reference to The Birth of a Nation. The treatment is intensely patriotic, appropriately for 1915, and much play is made of the American flag. The opening titles tell us that “Liberty-loving Americans who had built up the Texas colony were denied their rights.” So it’s pretty clear where we stand. The Mexicans, apart from assailing the virtue of American women and being free with alcohol, are Roman Catholics who cross themselves before going into battle. Of course they are also cowardly and flee before the blazing guns of the defenders. 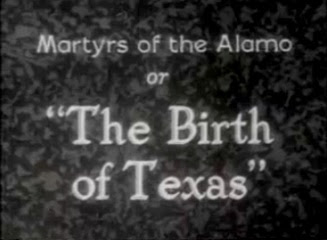 Sub-title bigger than the title
These defenders are commanded at first by ‘James Bowie’ (Alfred Paget), whose Bowie knife is a rather feeble toothpick compared with later versions, but buckskin and beaver-clad Travis (John Dillon) is appointed by Houston to take over. Bowie is stricken with a mortal disease anyway. ‘David Crockett’ is there, of course, looking very young (Allan Sears, who was 28), also suitably rigged out in coonskin cap. In fact nearly all the defenders wear them. It’s the furriest Alamo ever. David is a crack shot with his musket. 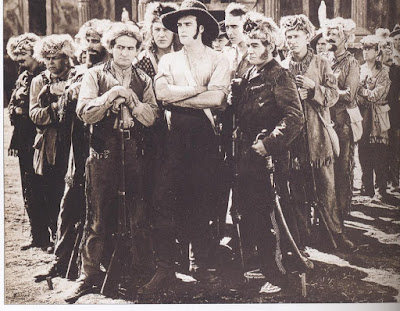 The furriest Alamo ever


The main hero, though, and with top billing, is Silent Smith (Sam De Grasse), scout and fearless fighter, who has fallen for an old soldier’s daughter (Juanita Hansen). He is sent by Travis to get reinforcements from Houston. It was lucky, in the pre-talkie days, that Silent could be so taciturn. Canadian De Grasse was one of the most famous villains of the silent era, and Douglas Fairbanks (who is in the credits for this film as a Texas soldier but it’s difficult to spot him) used him all the time as the bad guy. But here he is the good guy.


There is only one black man and he is a white man in blackface. There is of course no mention of the fact that the Texans supported slavery and Mexico had banned it. 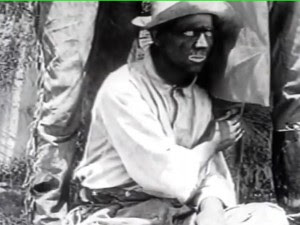 
The film does not finish with the fall of the Alamo and so has a kind of happy ending, rare in Alamo pictures, as the decadent Mexicans are finally defeated and Texas becomes free. (White Texas anyway).


IMDB gives 200 titles with the word Alamo in them. There certainly have been an extraordinary number of filmic defenses of that mission. This one wasn’t even the first. There were films in 1911 (starring Francis Ford) and 1914.


Martyrs of the Alamo needs to be seen, for the historic interest. Although it’s very expensive to buy on amazon, I found it as a free download from http://emol.org/movies/martyrsofthealamo/index.html