The Man from Nowhere aka Arizona Colt (Leone/Orphée, 1966)


The credits are a classic of the genre

There have been seven films of this title between 1914 and 1975 but this one is a spaghetti western. Actually, it’s by no means the worst spaghetti western ever and if the acting were better, if it had been decently photographed, if the music had been less dire, if the dubbing wasn't so poor and if the writing had been superior, it might almost have been passable.


It was directed by Michele Lupo, who had started on Italian sword-and-sandal epics, and it was an Italian-French co-production by Leone Films and Orphée Productions, Paris, so presumably Sergio Leone had a hand in it. 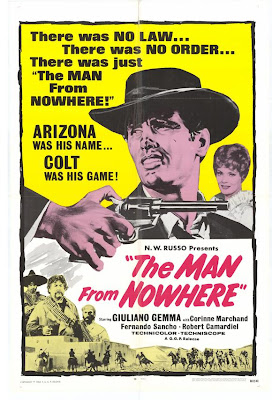 Colt was his game alright
Giuliano Gemma, who also graduated from Hercules and Viking films to spaghetti westerns, plays the nameless hero but no grunting, cigarillo-chewing, unshaven man in a poncho he. He is a dandy with perfect hair and permatan.

Nice tan, Giuliano
He later appeared in a dismal Butch/Sundance rip-off Sundance Cassidy and Butch the Kid. He was at least acrobatic. Fernando Sancho is not bad as the fat bandit chief Gordo in his red uniform coat, cheerfully homicidal. He had played the same role, this time in a black uniform, the year before in Minnesota Clay. There are some excellently bad-teeth heavies in his gang.


There’s a monstrously-crooned and overloud ballad at the start and end, and we are told in the credits who sang it (‘Raoul’) so that we could we rush down to the record store and buy a copy (we still had record stores in the 60s). The rest of the music (Francesco De Masi) is standard ear-plug-requiring pain, with whistling. There is some attempt at proper photography, with the odd constructed shot (Guglielmo Mancori). There’s even an attempt at a plot (Ernesto Gastaldi) and something of a dilemma for the girl (Corinne Marchand); should she give herself to Arizona Colt (the man from nowhere’s soubriquet) to save the town or spurn him to save her honor? Problems, problems.

Like the ad
There are the usual Cinecittà and Almeria locations (that serpentine dry river-bed they always use).


The credits are a classic of the genre, with garishly-colored silhouettes. There are some original touches, such as the bodies arranged in a ‘NO’ by Arizona to give Gordo his answer, and the final shoot-out in a coffin shop (which obviously saves time).


This film is eminently missable and your life will certainly not be the poorer if you do not see it. At the same time, there is at least some attempt to differentiate the good guys from the bad ones and a vague try at a plot. It’s too long (two minutes short of two hours, far too slow for a spaghetti) and, as usual, badly dubbed but the production values are not abysmal. It’s not quite good enough, however, to get off the basic one-revolver rating awarded to spaghettis.