The Gunfighter by Joseph G Rosa


Gunslingers: the fact behind the fiction

A well-researched and well-written book entitled The Gunfighter: Man or Myth? would naturally be of interest to Western fans. Such a title and such a concept encapsulate much of the fascination of the West, and did even while the West was still Wild. Gunfighters are what countless dime novels and Western films are about. And while all we fans know perfectly well that much of such pulp fiction and most of the movies contain about as much factual historical truth as Braveheart did about William Wallace (i.e. close to zero), still we do have a sneaking desire to know how much, if any, of our beloved tales were true. What was Wyatt Earp/Jesse James/Billy the Kid (or fill in the one you are curious about) really like? Did those Western characters really do that? That can’t have happened, can it? Not that anything as tiresome as historical truth actually has much to do with our enjoyment of Westerns. Perish the thought. Still, one is just a little curious.


Though a little dated now (it was first published by the University of Oklahoma Press, Norman, in 1969) and in some respects overtaken by later scholarship, Joseph G Rosa’s excellent book remains a standard text on the subject and a must-read for all serious Western fans. 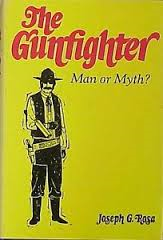 Still a good read
The late Mr. Rosa was an Englishman, and the leading authority on Wild Bill Hickok. Not that his being English should surprise us. Authorities on Western subjects are not exclusively American, far from it, and of course Europe especially has always had a close, knowledgeable and fascinated relationship with the Western as both history and myth.  See the post on Eurowesterns.

Joseph G Rosa
Rosa starts by defining his terms as we were all taught to do at college. He says that contemporary terms for men who lived by the gun were gun man, man-killer, assassin and, after a coining by Clay Allison, shootist. The words gunfighter and gunslinger are twentieth-century usages. Bat Masterson published a book, Famous Gun Fighters of the Western Frontier, in 1907. Although Rosa has found an instance of the use of the word gunfighter from the Topeka Daily Commonwealth of July 19, 1874, the word was very rarely used before Hollywood movies. Webster's says that the first use of gunslinger was by Zane Grey in his novel Nevada of 1928, although amateur etymologist Barry Popik has traced the two-word term gun slinger to the 1920 Western movie Drag Harlan. Anyway, gunfighter will do for us. By gunfighter, Rosa means lawmen as well as outlaws. 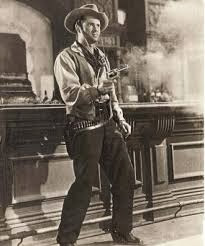 The gunfighter, Hollywood style
His book is really a survey of the whole Western myth and its foundation (or not) in fact. After expounding the gunfighter legend, in all its pulp glory, he goes back to the frontier origins of these men and has separate chapters on badmen and lawmen. From the Wild Bunch in Wyoming to the Texas of William P Longley and John Wesley Hardin, to paragraphs on Jesse James and Billy the Kid, to lesser lights such as Hurricane Bill (William A Martin) of Kansas, we get an interesting picture of the myth and the reality behind it. The Johnson County War is described but sadly there is no mention of Tom Horn.


The men operating on the other side of the divide mentioned include the Texas Rangers, Allan Pinkerton, and a separate chapter is devoted to the lawmen of the cowtowns. Rosa makes the point that one of the problems was the shortage of trained policemen; often men were hired who were simply ‘good with a gun’ but these might well have previously been on the other side of the law. 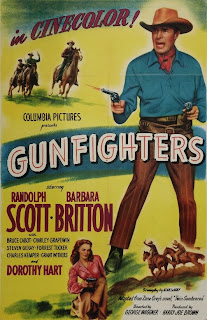 Two-gun Randy as gunfighter
As the acknowledged world expert on Hickok, Rosa naturally talks about Bill in Abilene and elsewhere. We have a look at Ellsworth, Newton and Wichita. We also get a lot of comment, by now pretty well known, on Dodge City in the time of the Mastersons.


Several famous gunfights are described in Chapter 9, The Gunfight, and the myth of the high noon quick-draw shoot-out in Main Street is duly debunked. There’s nothing by now new in all of this but it is well described and still interesting. 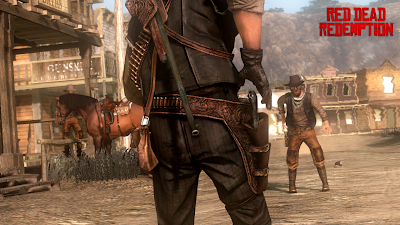 Main Street showdown gunfight at high noon, Red Dead Redemption style
Rosa is especially well informed on the firearms of the period and the way in which they were handled, and I found that the most interesting part, or the newest to me. He examines the various guns (as revolvers were invariably called) and the shotguns, carbines and rifles used at the time. The evolution of the revolver from the cap-and-ball pistol of the Civil War period into a light, modern, reliable, relatively accurate weapon like the 1873 Colt .45, with its store-bought cartridges that could simply be fed in through the loading gate, represented a huge advance. A gunfighter in the Hollywood tradition would have a hard job of drawing from a side holster the huge and heavy Dragoon Colts of the 1850s. They were really horse pistols to be used in cavalry charges and often kept in saddle holsters. But an 1880s Remington or double-action Colt was a different matter entirely. They were manageable and easy to carry. There’s an interesting comment about the prejudice against double action (that is, weapons which it was unnecessary to cock manually before each shot but which automatically turned the chamber to ready the next round) and how the old single action variety held sway well into the 1880s. 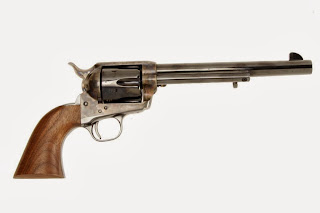 Colt .45 Peacemaker
You can also learn a lot about the range of these handguns (page 185), their accuracy (p 186), the speed with which they could be brought into play (p 188) and the penetrative power of the bullets (p 204). This all may well be old hat for expert gun buffs but to me it was fascinating stuff.

Bat Masterson underlined the difficulty of accuracy when he quoted Pat Garrett on the possibility of hitting a 1½” bull’s eye twice out of five shots at 15 paces. “I would call that very good shooting myself,” said Garrett, “if I took careful aim and did my best.” So those movies where the hero shoots the fleeing badman off his galloping horse with his sixgun at 500 yards may have been a trifle exaggerated…

As to speed, Rosa describes a later marksman, Edward McGivern, who in 1934 demonstrated drawing and firing five shots into a man-sized target in 1.2 seconds. All five shots were close enough that they could be covered with the palm of the hand. That does seem remarkable. McGivern used double action pistols and practiced for hours a day. But none of the gunfighters of the old West showed an interest in such speed. They usually went into gunfights with their weapons already drawn and there is no evidence to suggest that they allowed their opponents to 'pull' first out of some ‘sporting’ sense.

In the opinion of the Army experts of the 1870s, a penetration of 1 inch from a bullet into a pine board represented a very serious, possibly lethal wound. The Peacemaker bullet of 233 to 265 grains with a 40-grain charge of black powder could penetrate a 3¾” board at 50 yards and even at 300 yards penetration was 2¾”. So that meant if you could hit someone at longer distances, the wound inflicted was likely to stop your man, probably permanently.

The book ends with a detailed and tempting bibliography.