The Cold Dish by Craig Johnson

The Cold Dish (Viking, 2005) is the first of Craig Johnson’s series of police procedurals featuring Sheriff Walter Longmire, of ‘Absaroka County’, Wyoming.  It is very good.


21st century Westerns can’t be easy to write. There is the risk that either they won’t ring true as real-life dramas of today because they are forced into the mold of Western tradition (or cliché), or that they don’t look right as ‘proper’ Westerns, being too present-day savvy and looking at society through a very different prism.


On the other hand, Westerns and crime novels are blood brothers. You only had to ask Elmore Leonard or Robert B Parker, who wrote both and whose modern detective books have more than a whiff of Western about them. As Parker has one of his characters say in a Spenser novel modeled on The Magnificent Seven, and doubtless Leonard would have agreed, “We deal in lead, friend.” 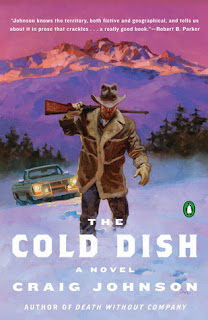 Good book
So setting a murder mystery in the ‘pure’ West of Wyoming and having your protagonist wear a beaver-felt Stetson and carry a .45 is in many ways a perfect match. Just like the ballistics report on the slug from the 1876 Sharps used to do the deed(s) in Vol. 1.


As Wyoming is the least densely populated state of the Union and also has the lowest per capita murder rate (2.4 homicides per 100,000 population in 2012 as opposed to Alabama’s 7.1 and a national average of 4.7), it’s odd that Absaroka County should have such a high body count but that’s police procedurals for you. You wouldn’t want to move to that sleepy English village where Miss Marple resided either, not if you desired longevity, or, come to that, to the scene of those CSI: Any City You Like episodes, where the most ingenious ways are devised of disposing of many of the denizens by the extraordinarily murderous other inhabitants, often with several slaughterers and slaughterees in one show. Poor old Longmire. All of those Wyoming annual homicides seem to happen in his county. He’s gonna find it hard to get re-elected. 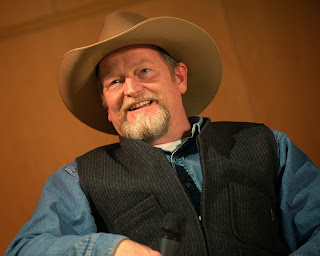 Johnson seems a cheery fellow
There are some excellent characters apart from Walter himself. At the station (an old Carnegie library), salty-tongued Victoria Moretti, Vic, is from an Italian family of police back in Philadephia, a career cop who finds herself in this backwater because of her (unsatisfactory but never seen) husband. Walter likes her and in fact is grooming her as his successor. Walt’s other deputy, Turk, is the nephew of his predecessor as sheriff and also aims for Walt’s job come next election. He is flashy and vulgar, as you can tell from “the juke box Turk called his car”, a canary-yellow TransAm with myriad decals and bad-taste bumper stickers, and sheriff and deputy don’t get on. In fact they come to blows. Turk spends a lot of the book out of town, though, and towards the end applies for a Highway Patrol job – Longmire gives him a glowing testimonial. The team also includes dispatcher Ruby, a stern, kindly, motherly figure who keeps Walt on the straight and narrow. Or else.


Walt Longmire is a widower of three years but finally manages to get his life back together somewhat and, with the aid of his best friend Henry Standing Bear, the Cheyenne owner of The Red Pony bar, Walt shows interest in a woman, Vonnie. Vonnie is the rich daughter of a suicided daddy and she plays a growingly important part in the plot. She isn’t just Western love interest.


Longmire is very fat. That part was lost in the TV series with its svelte actor but you ‘see’ this excess of weight quite a lot in the book. When Henry takes him in hand and makes him start running in the morning, the effects are nearly fatal but that and the desire to impress Vonnie do lead to a slight reduction in pounds. 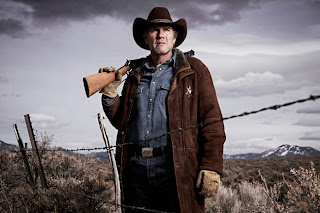 Aussie Harrison Ford lookalike - not fat enough
There's a hint of the Spenser/Hawk relationship in the Longmire/Henry one: it's permitted between them and they know each other well enough for Longmire to make joshingly slighting (obviously ironic) racial references about redskins. Come to think about it, Spenser came from Wyoming.


The murder weapon gives a very Western flavor to the book. It is an 1876 Sharps used by the Cheyenne at Custer’s Last Stand. Its story and its power make it a real character in the novel.


Series 1 of the TV show is partly and loosely based on this novel – but very loosely. I enjoyed the series though here in France it was shown on a channel, D8, that really ought to fire its director of programming. The episodes were shown in a random order, starting with 2 and with the pilot somewhere in the middle, some episodes repeated and some missed out entirely till shown after the final one (which was shown third to last). The Programming Director could perhaps be shifted to a job more in line with her or his talents. In charge of the D8 photocopier, for example. Though D8 staff would get their copies back with some pages missing, some repeated and all in the wrong order. Paperclip Acquisition Manager, maybe.


The TV Longmire, Robert Taylor – no, not that one; this one’s Aussie and the other one's dead - looks like Harrison Ford and acts a little like Tom Selleck’s Jesse Stone. Generally the cast is satisfactory and the series quite enjoyable. Lou Diamond Phillips is Standing Bear, in his Steinbeckian bar. Mr. Phillips is of Spanish, Scotch-Irish, Chinese, Filipino, Hawaiian and Cherokee ancestry, which is, I guess, why they chose him to play a Cheyenne. He’s very good though.

All in all, however, the book is classier. The TV treatment of the first book changes the murderer, misses out the Nieman-Marcus helicopter and doesn’t even have the Sharps. Very poor show, though the Sharps turned up in another episode, before or after, who knows.


Series 2 isn’t out yet here in the Old World. I may have to wait and see it on DVD so that I can catch the episodes in the right order. I will watch it though.


But do read the book. It’s well written and Western enough to be taken seriously.