There’s something rather depressing about a Western-lover of my vintage (born in the decade after the Second World War) finding that even in the 1960s they could make a movie with all the old timers, known to me from countless oaters, being wheeled out of retirement for one last go-round.


The plot’s been done before, of course, done to death even, but never mind. It’s fun. Retired Texas Ranger Captain Pat O’Brien finds that his son-in-law, newspaper editor Ricky Nelson (in 1969, ten years after Rio Bravo, even Ricky Nelson is nearly 40, sigh) is running for office on an anti-corruption ticket in a town treed by crooked Mayor Edward Andrews. Pat sends for his old Rangers to bring a bit of muscle to the situation.


These ex-Rangers turn out to be Walter Brennan (born 1894), Chill Wills (born 1902) and Edgar Buchanan (born 1903), three of the greatest character actors of Western movie history. Of course their gunmanship is not quite what it was. Rather like Donald Sutherland in the same plot about astronauts in Space Cowboys, old-folks'-home resident Buchanan is somwhat more short-sighted than a bat and unlike the bat (perhaps that's bats' problem) wears pebble spectacles, so that doesn’t help his shooting much. Brennan is lonely in Abilene living with his daughter and has nothing to do (till the call comes) and Chill is down-and-out as a gambler in Oklahoma, thrown out of the last saloon that would have him. 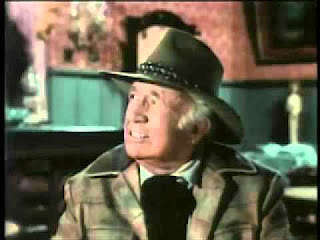 In the town, there is also a great line-up. The crooked judge is Andy Devine and the corrupt marshal is Jack Elam. The old guys’ ally Gypsy Rose Lee is the saloon owner. It really is a dream cast of oldies.

Westernwise, the only real weaknesses were O’Brien and Andrews. Sure, they were well known character actors of a certain age, and yes, both do a good job, but neither was what you would call a Western regular. I might have had, to complete a royal flush of favorite Western character actors, Brian Donlevy (born 1901) as the bent mayor and John Dehner (born 1915) as the Ranger captain. 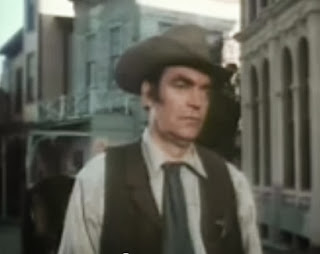 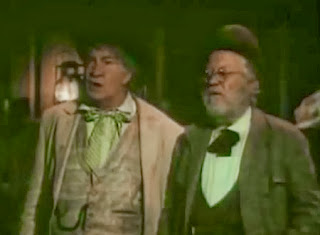 Anyway, while predictable and verging on the edge of corn, it is a blandly enjoyable watch and you can’t help smiling as you watch. That’s no small achievement, e-pards.

There was a sequel...