In the clunker department

It sometimes seemed that in Westerns Jeff Chandler could only appear in a war bonnet or US Army uniform. He was either Cochise or a soldier decently trying to make peace with the Indians. A couple of times, though, he was ex-Army and appeared out of uniform. That’s what happened in The Great Sioux Uprising.


I fear, though, that it was the least of Jeff’s oaters. OK, it was very nice to look at, with its Maury Gertsman color photography of lovely Oregon locations. Universal were good at that. But the directing and writing were sub-standard. 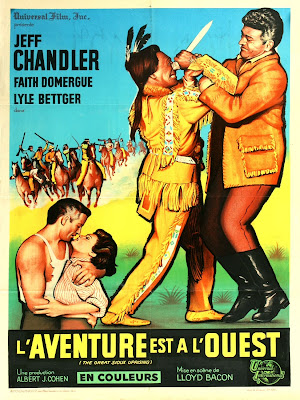 Lousy poster
Lloyd Bacon had appeared (as an actor) opposite GM 'Broncho Billy' Anderson in any number of silents, always as ‘card sharp’ or ‘Billy’s cowardly brother’ or ‘cattle thief’ or similar. Then he popped up to direct the dreadful The Oklahoma Kid, that regrettable Cagney/Bogie Western in 1939 (heaven knows how he got the job but he made a bad fist of it); then a lousy B-Western with George Brent and Priscilla Lane, Silver Queen, in 1942; then this one, his last Western (thank goodness). The plot is clunky, the staging corny and the whole thing eminently forgettable. 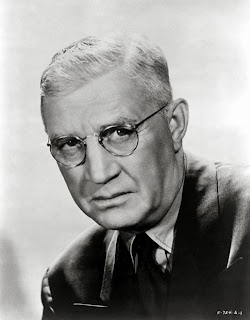 Lloyd Bacon. Shoulda stuck to silents.
Part of the debit for that goes to the writers, Melvyn Levy, J Robert Bren and Gladys Atwater. They hadn’t got a clue. Bob and Gladys had done the John Wayne corn In Old California and the turgid American Empire. Melvin had done the awful Calamity Jane and Sam Bass. Oh dear.


One snag with the writing is that the movie is not about a great Sioux uprising. Given the title, that is rather a drawback. It’s a skullduggery plot with Lyle Bettger rustling Indian horses to sell as remounts to the Army in the Civil War. Jeff is an ex-Army surgeon sickened by slaughter and with no more self-confidence who practices on the side as a veterinary surgeon. He saves one of the ponies belonging to Red Cloud (John War Eagle) and is trusted by both sides. You can tell Lyle is the bad guy right off, even though in the first scene he is being nice and charming to the Army major, because his sidekick (Stacy Harris) has an eye-patch. Obviously a henchman. He’s also obviously a villain because it’s Lyle Bettger. I mean, 0/10 for suspense. 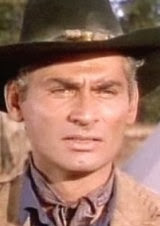 Jeff as ex-Army surgeon saving the Union
Faith Domergue (Audie’s squeeze from the ho-hum Duel at Silver Creek) is the love interest. She was a Howard Hughes, er, protégée. Peter Whitney is Ahab, a Bible-quoting blacksmith in a top hat, quite amusing I guess. He was later in every TV Western show there ever was.


The only interesting thing for me really was the appearance of General Stand Watie. I’d just been reading about him, this very afternoon, in Gone to Texas (source book of The Outlaw Josey Wales). Watie (1806 – 71) was a Cherokee who became a brigadier-general in the CSA. He commanded the Confederate Indian cavalry in the Trans-Mississippi and was the final Confederate general in the field to surrender at war's end. In The Great Sioux Uprising he goes to the Plains to convince the Sioux, Cheyenne, Nez Percé etc. to join the Confederacy and only Jeff manages to persuade them not to. You didn’t know Jeff Chandler won the Civil War for the North, did you? Strange but true. 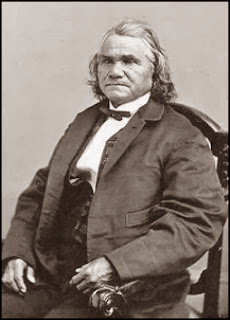 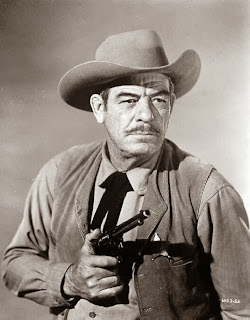 Glenn Strange the Great
Watie is played by Glenn Strange, a 6’6” deputy sheriff, rodeo performer and cowboy of Cherokee descent. Sadly, he doesn’t get much to say; he only gets to thump a black servant (or slave) which turns the Indians against him and makes them listen to Jeff. Strange was in (wait for it) 258 Westerns from The Mounted Stranger in 1930 to a 1973 episode of Gunsmoke. Now that’s dedication.


But otherwise, honestly, dear e-friends, I would give this one a miss. 1953 was the year of some really great Westerns: Shane, The Naked Spur, Hondo. And some decent ones: Escape from Fort Bravo, The Man from the Alamo, Kansas Pacific. But it was also a year of clunkers and The Great Sioux Uprising will be found in the Clunker rack in stores. It's just staggered to 2 revolvers for Jeff, Glenn Strange as Watie and the nice photography.

Jeff made another Indian Western later the same year, War Arrow. It wasn't brilliant but it was better than this one.