Audie Murphy did so many Westerns for Universal in the 1950s and 60s that they risk all merging into one. He himself knew this and once wistfully commented that all they ever changed was the color of his horse. But they all had something: they were no Poverty Row junk pictures. Their production values were high, with decent budgets, they were well photographed, and the studio hired decent writers and, sometimes, top character actors to support Audie. Take, for example, Posse from Hell.


It’s a story of a gunfighter who rides out after four evil bandits who have robbed a town’s bank, kidnapped a girl and murdered the sheriff, the gunfighter’s pal. Audie is tough, hard and unsmiling. He don’t need no help. But townsmen insist on riding out with him in a posse. How big is the posse? Why, seven men, of course! It has to be seven. As regular readers of this blog will know, it’s the Mystical Western Number. The MWN of 7 appears again and again. 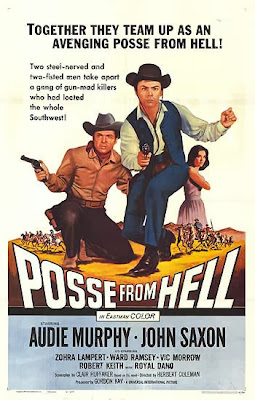 Yes, well...
Unfortunately, though, most of these seven are useless, incompetent fools. One by one they fall away until there are only three left. Audie has a dude Easterner, Seymour Kern, very well played by John Saxon, and an Indian racially despised by the town, equally well played by Rodolfo (billed as Rudolph) Acosta. These prove to be the heroes of the chase and the only guys with guts. 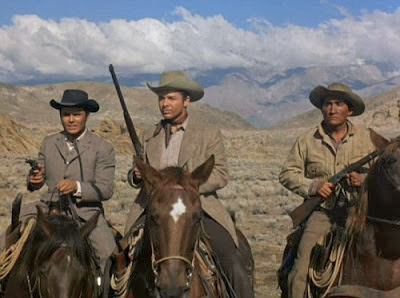 The three who count: Saxon, Murphy, Acosta
Saxon really was an Easterner come West. Born in Brooklyn, he did eleven Westerns and I remember him especially for his performances in The Unforgiven, The Appaloosa and Joe Kidd. Acosta worked in Mexico in the films of the great Emilio Fernandez, came to the US to work for Universal and made a career as Indian or heavy. I think of him most in connection with Hondo, From Hell to Texas, Flaming Star and One-Eyed Jacks. Both Saxon and Acosta were excellent Western character actors.


The kidnapped girl, Helen, is played by Zohra Lampert and is rather good. The bandits rape her (off stage, naturally) and she has to come to terms with this brutal horror. Audie kinda helps her, though it’s tough love. This was Mademoiselle Lampert’s only Western and that was a pity. I thought she did it very well. 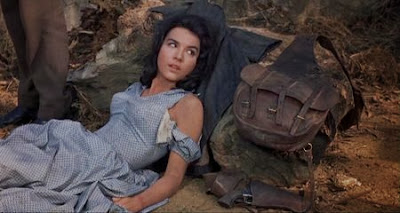 Zohra Lampert, rather good
Oh, I nearly forgot. My hero Ray Teal is in it. But he’s the banker, only semi-bad, and only has two scenes, which is a pity. I prefer him as greedy rancher or corrupt sheriff. And Lee Van Cleef is one of the heavies. And Royal Dano is on the posse. So come on, that’s quality. 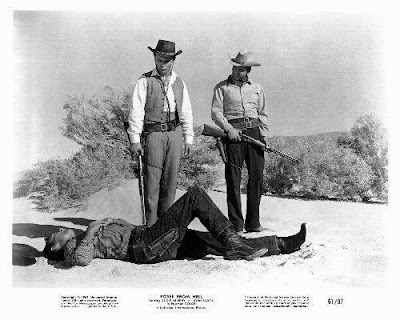 Lee bites the dust
What with To Hell and Back, Hell Bent for Leather and Posse from Hell, they sure gave Audie Hell in his titles.


It was Herbert Coleman’s only Western feature film as director, though he did direct quite a few Whispering Smith TV episodes with Audie.


OK, yes, it’s a straight chase movie with nothing really outstanding about it. But the actors are good and the writing not half bad. It was a Clair Huffaker screenplay from his own novel. It’s tightly constructed and the bad guys are bad enough to be fearsome (though a bit one-dimensional). 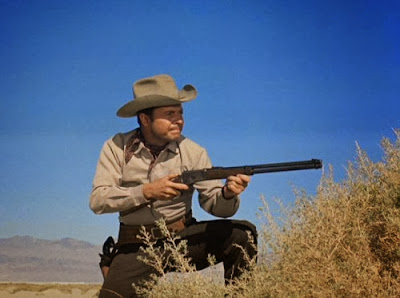 Tough guy Audie
Like many of these Universal Murphy pictures, the cinematography is rather good, this time by Clifford Stine (he’d done the 1953 Law and Order, the Van Heflin Mexican picture Wings of the Hawk and had done another Audie movie, Hell Bent for Leather, the year before). The chase scenes were shot in the Alabama Hills up at Lone Pine and are very ‘Western’. Some shots are really classy.


The Joseph Gershenson score is dark and modern, suitably sinister, and well done. Apparently he reused music from It Came from Outer Space!

It's tough, quite violent and hard-oiled. Audie is unusually grim.


So the movie is definitely worth a watch, and it's one of the better ones of the series.