Better than you think

From 1950 onwards, any number of sub-Broken Arrow, broadly pro-Indian Westerns appeared, some of them pretty average but every so often one came out that was a little unusual – and rather good. Universal’s Budd Boetticher-directed Seminole in 1953, for example, which gave us colorfully-costumed Indians in Florida with Anthony Quinn as their chief, treated sympathetically by Army officer Rock Hudson, or the same studio’s  Walk the Proud Land (1956) about John Clum as Indian agent, which was silly historically but interesting and different.


Such a one was Pillars of the Sky. Instead of the usual Sioux, Comanche or Apache ‘savages’ to combat (and for combat, read rout), here we have the story of the Nez Percé, Cœurs d’Alène, Walla-Wallas, Umatillas, Yakama and Palouses. We are in Oregon, 1868. And these Indians are Christian.

CinemaScope, rather nice
Pillars of the Sky is in fact an explicitly Christian Western. The chiefs bear Christian names, Joseph, Abraham and Isaac. Their rebellion collapses for expressly Christian reasons. Ward Bond is outstanding as a missionary preacher and doctor, Holden (no relation to Cormac McCarthy’s Holden, I assure you!) even if he is portrayed as a rather Protestant pastor (the tribes were mostly Roman Catholics).


In his book Three Bad Men, one of the few serious accounts of the films of Ward Bond and a very good read, Scott Nollen says surprisingly little, I think, about Bond’s performance in this film. Bond is in fact superb and it must have been one of his best ever roles. In fact John Ford and John Wayne had been penciled in to make Pillars but turned it down in favor of The Searchers – although Ward Bond managed to be in both. There is little doubt that had Ford/Wayne done it, it would have been a greater film. As it is, it is undoubtedly a B-picture. Jeff Chandler took over from Wayne and George Marshall directed, not Ford.

Ward Bond outstanding
I always thought gray-haired Jeff Chandler rather good in Westerns. We think, of course, of his Indians, especially of him as Cochise in Broken Arrow in 1950 (and in The Battle at Apache Pass two years later and, briefly, in Taza, Son of Cochise two years after that) but in fact he was just as often on the other side, in US Army blue: Two Flags West (1950), War Arrow (1953) and Pillars of the Sky are examples. A burly boy from Brooklyn, Chandler nevertheless convinced as a tough Westerner. He died tragically young, aged 42, after blood poisoning from a slipped disc operation in 1961.

Jeff Chandler, very good
In Pillars, he is a boozy, bolshie head of Indian scouts, First Sergeant (formerly Captain) Emmett Bell. He has, as was by 1956 to be expected, a rather stupid by-the-book Army commander to deal with, Col. Stedlow (Willis Bouchey, often an Army officer in Westerns). This colonel insists on building “a stupid bridge”, as Bell calls it, across the Snake and leading an expedition into the land set aside for the Indians by government treaty. War is the inevitable result. I have the impression (I may be wrong) that had Ford/Wayne/Bond done it, it could have been a Cavalry tetralogy they did; it would have had many, perhaps too many similarities to Fort Apache, She Wore a Yellow Ribbon and Rio Grande. They were right to opt in ’56 for The Searchers (which many regard to be the greatest Western ever, and they may not be wrong).


George Marshall, of course, was no John Ford. Marshall directed close on fifty Westerns, from the silent Across the Rio Grande in 1916, with female lead Olive Carey, to the slightly ho-hum Glenn Ford comedy Western Advance to the Rear in 1964. He is most famous for the great Destry Rides Again with James Stewart and Marlene Dietrich in 1939 (he also directed its weaker 1954 sequel Destry with Audie Murphy). When the Daltons Rode in 1940 was energetic and fun. Lust for Gold, another Glenn Ford picture, was very good indeed, and yet another Glenn Ford film was in my view his masterpiece (better even than Destry Rides Again), The Sheepman in 1958, which rivals Blazing Saddles as the best comedy Western ever. So Marshall had a pretty good record. 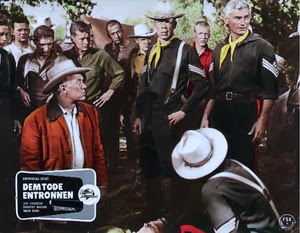 Lee Marvin (center) as Irish sergeant
Sadly, though, it must also be admitted that much of Marshall’s Western output was pretty stodgy, if not downright bad. The Savage was poor and many of the others were only average B-Westerns. Still, I think that while Pillars of the Sky has its weaknesses, it’s rather better than many of Marshall’s very ordinary movies. I would put it in his top ten anyway.


The leader of the Indians, out for war and unwilling to listen to peace talk, is Kamiakin (Michael Ansara). The real Kamiakin (1800 – 1877) was of mixed Nez Perce, Spokane and Yakama (or Yakima) ancestry. His mother was a Yakama, he married a daughter and granddaughter of a Yakama chief, and we usually think of Kamiakin as a Yakama. He formed an alliance of 14 tribes living on the Columbian plateau and led them in the so-called Yakima Indian War of 1855 (not 1868 as in the movie). 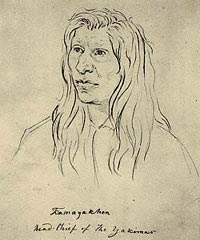 The real Kamiakin
The tribes had seen encroachments on their lands from British, French Canadian and now United States settlers and soldiers. In 1855 three treaties were forced upon them at the Walla Walla Council. They were forced to move from their tribal lands to a reservation in northeastern Oregon. Their 4m acres were reduced to 95,000, not enough to support them in their traditional way of life. The same year, gold was discovered on the reservation and so of course all treaties were off and prospectors flooded in. It was the same old story.


Fourteen settlers and three US soldiers were killed. The Army was introduced in force and a fort built. The Indians’ resistance was doomed. Kamiakin himself escaped to the colony of British Columbia but twenty-four other chiefs were either hanged, shot or summarily ‘executed’. The Yakama people were forced onto a reservation south of the present city of Yakima. Later, Kamiakin moved to Montana with the Flathead tribe. The day before he died (sometime in 1877) he was baptized a Roman Catholic and given the name Matthew.


Syrian-American Michael Ansara’s Kamiakin is quite well done. It was his seventh Western and he was later to become a mainstay of TV Westerns. In Pillars of the Sky, the other chiefs are more elderly and weaker by comparison to him. He is killed in the fighting, and the other chiefs succumb, rather absurdly being forgiven by Pastor Chandler on his knees (he has taken over from Ward) in a saccharine church scene. They weren’t hanged at all, you see, but became Good. Ah me, how the West was spun.

The movie Kamiakin (Michael Ansara) with carbine
As for the minor roles, we have Lee Marvin as an Irish sergeant, who dies gallantly. In fact one of the better scenes of the movie is the carousing of Marvin, Bond and Chandler on the hilltop as their comrades slip away in the night and they remain to convince the Indians that the camp is still occupied. 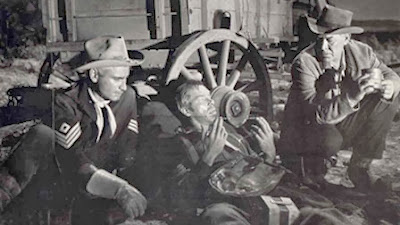 Hilltop carousal
And Olive Carey is there again! She’d only been 20 in that Marshall 1916 silent Across the Rio Grande and now she was 60. She plays the Indian-hating wife of a killed prospector who sees reason and takes an Indian child under her wing.


The screenplay was by Sam Rolfe, who had done The Naked Spur, so pretty classy, from a Will Henry (Heck Allen) story, later of Yellowstone Kelly, Mackenna’s Gold and Young Billy Young fame.


The movie was shot in the right locations, in Oregon, and photographed rather beautifully in CinemaScope by Harold Lipstein (Across the Wide Missouri, Wichita, Walk the Proud Land). Much of the scenery is not Oregon as we know it, Jim, but looks more Montana-ish, and when the soldiers take refuge from the Indians on a brow you can’t help thinking of Little Bighorn. The actual pillars of the title are shown only once, sadly (because they are wonderful). The pillars also have a religious significance, of course.


Well, all in all, I would definitely recommend a look at Pillars of the Sky. It isn’t The Searchers; it isn’t even She Wore a Yellow Ribbon. But it’s not half bad. And you get Ward Bond at his best.