Formulaic but in a good way

Crossfire Trail is really an excellent film. Tom Selleck’s production company TWS teamed up with Simon Wincer (Ozzie director of Selleck in Quigley Down Under and before that the great Lonesome Dove) and a couple of good Dove actors (Barry Corbin, William Sanderson) to make a seriously classy TV Western.


Selleck made his mark back in 1979 in a TV oater, The Sacketts, based on the Louis L’Amour novels, and then in another L’Amour tale, The Shadow Riders, also for TV, in 1982. Later, round about the turn of the century, he made a nice little series of such movies, such as Last Stand at Saber River, Crossfire Trail and Monte Walsh. They were all good, some outstanding. 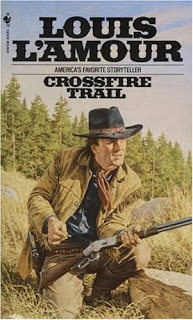 The novel
Saber River had been based on a high-quality Elmore Leonard novel but for Crossfire Selleck went back to L’Amour, a 1954 book, L’Amour’s eighth. It tells of a tough, decent Rafe (for Rafael) Covington, who makes a promise to a dying friend that he will take care of his ranch in Wyoming – and his widow. 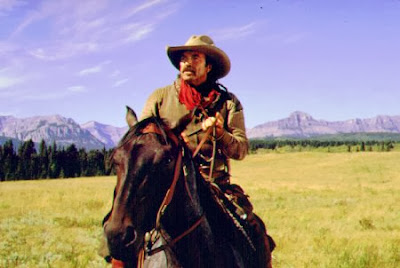 Selleck very good. He convinces.
It was originally aired on TNT on January 21, 2001 and was enormously popular, securing over 12 million viewers. Justifiably so, because it is very well done.


Why? Well, one reason is Selleck himself. He really looked the part and his decent tough-guy act was just right for a gritty Westerner with his mind set on doing what a man’s gotta do.


Another reason is the support acting, especially of Barry Corbin as the bought-and-paid-for sheriff. He had aged somewhat from his bumbling Roscoe in Lonesome Dove and is now gray-bearded, even plumper and absolutely superb. He introduces himself as justice of the peace but warns that around here there ain’t much of either. 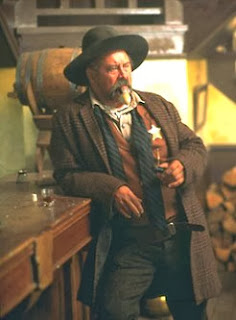 
We also have William Sanderson (Lippy in Lonesome Dove and EB Farnum in the HBO Deadwood) as the bartender. Again, he is top class and lifts the whole movie during his scenes. 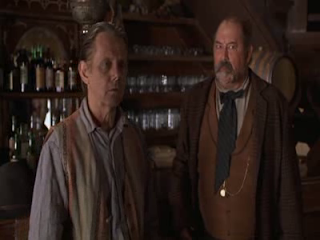 William Sanderson also very good behind the bar
The other actors are OK, though would not set the Milk River on fire. Virginia Madsden is the beautiful blond widow. Mark Harmon is the saloon owner who owns half the town and wants the other half, the widow and the widow’s ranch for the oil on it. He had been Johnny Behan in Wyatt Earp. He looks very like a young Randolph Scott. He is satisfactorily bad, slimily charming at first then just plain mean. 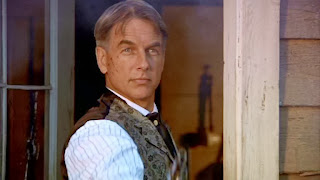 Bad guy Harmon. Not bad.
Wilford Brimley is amusing in the tough James Gammon-y old-timer sidekick part. He’d been doing Westerns since the late 60s (he was in True Grit) and is appropriately crusty, wry and stalwart. 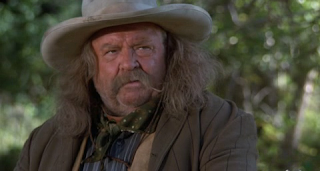 Old-timer sidekick: Wilford Brimley
Selleck’s other sidekicks are a bit on the bland side. Glaswegian David O’Hara battles with an ‘Irish’ accent. Also a bit weak, unfortunately, was the fearsome hired gun that bad guy Harmon gets up from Kansas, Beau Dorn (played by Brad Johnson, in his fifth Western). Director Wincer does a good job with making him as sinister as possible, face in shadow as long as possible, that kind of thing, and the costume and props depts. also did well with his fancy clothes and scary long-range rifle with telescope sight. But once he was actually in action he seemed a bit, well, ordinary. 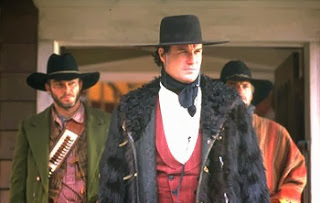 Hired gun Brad Johnson not really frightening enough
The movie was shot in Alberta, as so many Westerns are these days, and it does look wonderful. The photography is by David Eggby, who had worked for Wincer on Quigley in Australia and Lightning Jack (a sort of Crocodile Dundee goes West) in New Mexico. There is a slight Wincer/Eggby tendency to pretty-prettiness and picture postcard views, but not enough to spoil things. Mostly, you just admire the scenery.


Pacey direction with tension building to the inevitable showdown and a tight Charles Robert Carner screenplay (Carner’s only Western) from the L’Amour novel mean that this Western grips well and keeps you watching.


Yes, the movie is pretty formulaic but you know, with Westerns that’s not necessarily a bad thing. Westerns follow certain conventions, especially if they are written by famous novelists of the genre. It’s a balance. You want the movie to respect the conventions. You enjoy quotations of past epics. You want to feel comfortable in the West you know, even if it is a mythical one. But you don’t want rip-offs and blatant copies and hackneyed clichés. A good production can get that balance right. This Selleck/Turner/Wincer collaboration did that.