The film ranks with The Searchers as a study of racial hatred and also reminds us of the excellent Flaming Star in its subject matter. Even the ‘good’ white people have an almost deranged loathing of the Kiowa. The very sight of one is enough to cause hysteria among the settlers. This is racialism on a passionate scale. We do not, however, see enough brutality of the Kiowa towards the whites to justify this almost insane hatred. If we had, it might have given a more nuanced picture. The two-dimensional Indians do slightly undermine the anti-racist message. 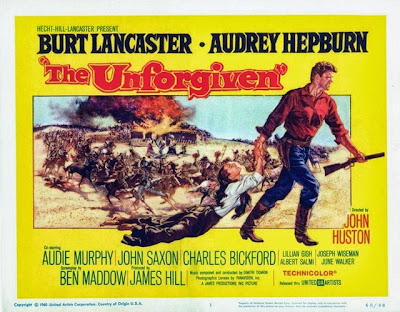 Yes, well...
John Huston directed, acted in and/or wrote eight Westerns or semi-Westerns, notably The Treasure of the Sierra Madre in 1948. The Unforgiven was probably his second-best example of the genre. It was written by Ben Maddow (The Man from Colorado, Johnny Guitar) from a novel by Alan Le May, writer of some successful Westerns like San Antonio, The Walking Hills, High Lonesome and, of course, The Searchers. 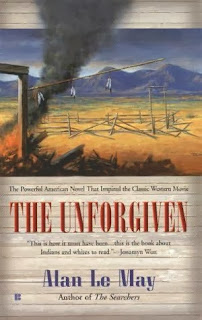 The book
The story tells of three brothers in a Texas-Panhandle family of settlers who discover, to their shock, that their adopted sister is a Kiowa Indian.


The members of the Zachary clan are wonderfully well played. Burt Lancaster is magisterial as Ben, the head of the family. What a fine actor he was at times. Yes, he could ham it up and he was in some Westerns which were average at best or even poor (Apache, Vera Cruz, Lawman, even The Hallelujah Trail, God help us) but he was magnificent with the right part. One thinks of Vengeance Valley, Valdez Is Coming or Ulzana’s Raid. But The Unforgiven was probably his finest Western movie. 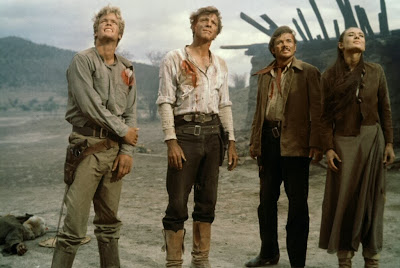 The Zacharys: Doug, Burt, Audie, Audrey
Similarly, Audie Murphy as Ben’s Indian-hating younger brother Cash was never better, except perhaps in The Red Badge of Courage (also directed by Huston). Murphy made a long series of conventional B-Westerns which had highish production values but were never really 'art'. In The Unforgiven, however, he is powerful, weighty and strong, a serious actor of considerable ability.


The youngest brother, Andy, is played by Doug McClure. The Unforgiven was really the launch pad of his Western career. After a micropart as a soldier, almost an extra, in Friendly Persuasion (barely a Western at all), he had appeared in a fair number of TV Westerns in the late 1950s before this, this, his first major role. From 1962 to 1971 he was of course famous as Trampas in The Virginian (I remember my mother thought he was very handsome). He was good as Sam in Shenandoah but really we think of him as a TV star. In The Unforgiven he plays the green teenage son with commendable enthusiasm, although he was in his mid-20s.


Lillian Gish, 67, is superb as the boys’ mother, Mattilda. As you probably know, she had starred in three early silent Westerns, including The Battle of Elderbush Gulch in 1913, and in the powerful Victor Sjöström-directed The Wind in 1928. She was also one of the McCanles clan in Duel in the Sun in 1946. But The Unforgiven was her first Western since and was her last. As a tender, tough frontier mother who is still violent enough to lash the horse away from under a man waiting to be lynched, she is magnificent.


Only Audrey Hepburn is wrong – miscast - as the adopted sister, Rachel. She is too delicate, too sweet (and really too posh) to be a frontier-raised Indian foundling. 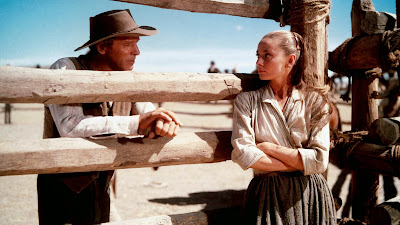 Hepburn miscast
For the rest, we have Charles Bickford very good indeed (once again, this was probably the best Western of the 20 he did) as the disabled Zeb, head of the Rawlins family. John Saxon is also fine as Johnny Portugal, the Indian or half-breed cowhand, seen as an ‘enemy’ in the white ranks yet more or less tolerated – and what a good rider he was. It was his first Western.

Wiseman as Death
And Canadian Joseph Wiseman, the icy Fernando Aguirre from Viva Zapata!, has the wonderful part of the ghostly Abe Kelsey who causes all the trouble. He appears on a pale horse and is, of course, Death. Perhaps Clint Eastwood, director of Unforgiven in 1992, was quoting The Unforgiven in his 1985 Pale Rider.


The film is intense, occasionally earthily bucolic, and frontier-authentic. It starts with a very classical allusion: the Odyssey-like cow-on-the-roof at the start is amusing and harmless and sets the happy-family tone, but the image comes back to haunt the Zacharys in a far more menacing way at the end of the movie. There are other striking images, such as the playing of Mozart on the wild prairie, or Zeb Rawlins’s crutches made from rifle stocks or the melting down of lead soldiers for bullets. Skeins of flying geese symbolize freedom.


The Dimitri Tiomkin music is grand, even grandiloquent, symphonic, impressive. The Franz Planer photography is often dark, always high-quality and very striking. He only shot two Westerns, this and The Big Country.


The Unforgiven is a big, two-hour, color Western and it came out the same year as the commercial movie that indicated the future of the genre in the coming decade, The Magnificent Seven, but it harks back to the classic tradition of 1950s Westerns more than looking forward to the next generation. It is no worse for that, however.


Apparently, John Huston and Burt Lancaster had considerable disagreements over the film. Lancaster produced it and his company was aiming at big box-office, whereas Huston was perhaps looking for something more. Huston distanced himself from the finished product and in fact claimed that "of all his films, The Unforgiven was the only one he actually disliked." That seems strange to us, given the quality of the picture, because The Unforgiven is one of the great Westerns.