The Law at Randado by Elmore Leonard


Could have been a great B movie

The Law at Randado (1954) was Elmore Leonard’s second Western novel, following hard on the hooves of The Bounty Hunters. It was later made into a (sadly) not very good TV movie, Border Shootout (Turner, 1990), which has the distinction of being Glenn Ford’s last Western (he had a minor part). 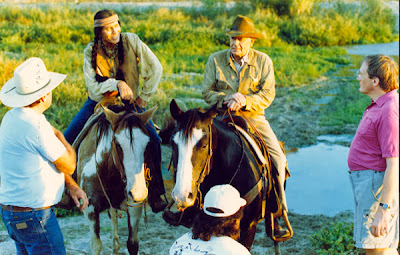 Glenn Ford on the set of Border Shootout
The Randado in question is somewhere down there in Arizona, not the one in south Texas. Most Leonard Westerns are set in AZ or NM, and have a real sense of place.


It tells of a young deputy sheriff, Kirby Frye, who is quietly and modestly tough but still has to prove himself. How he was recruited by the experienced old County Sheriff John Danaher (Glenn Ford’s part) is told in flashback. While Frye is out of town, leading citizens, urged on by Phil Sundeen, the no-good son of the local big rancher, “try” and then hang two Mexican rustlers. Danaher and Kirby Frye (carelessly by the editor occasionally referred to variously as Frey or Fry) get warrants for the lynchers and go after them. The lawmen are helped by Apache scout Dandy Jim, in jail for a tulapai drunk. 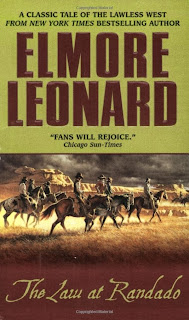 Tight little gripper
It’s a tight, gripping little tale of how law and order prevails over mob rule, and it’s told in that typically economical Leonard way.
The characters are all strongly-drawn, distinctive and come across as real people. 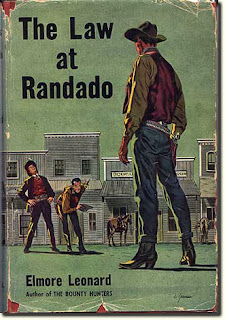 Great cover
Leonard enjoyed recycling characters and even scenes. Sundeen (funny how bad men often have -een names) was to reappear in a 1979 novel, Gunsights and the siege at the abandoned mine, where the bad guys hole up in the assay shack, is also reused. Sundeen’s sidekick in Gunsights was the excellent and very sympathetic Ruben Vega but sadly he hasn’t been invented yet so makes no appearance in Randado. Instead, backing Sundeen we have a classic professional gunhand in the shape of Clay Jordan, whom our hero Kirby has to face… 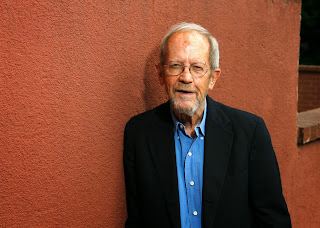 The master
On one level, The Law at Randado is a basic, pretty conventional Western tale of brave lawman against pusillanimous townsfolk and bad outlaw. One can quite see how in the wrong hands it would end up as a second-rate TV Western (as in fact happened). But the written story is told with such vim and is so gripping that we can easily imagine it also being made into a very good Western movie – Budd Boetticher might have directed it for Ranown, perhaps, with Randolph Scott as Ranaher and Anthony Perkins as Frye. Yes, that’d work. Leo Gordon as Sundeen. Lee Marvin as Jordan. I can see it now.