The end of the saga

Streets of Laredo was the first book featuring Woodrow Call to be written by Larry McMurtry following Lonesome Dove, though it is the last in the series chronologically and closes the story. The others, Dead Man’s Walk (novel 1995, TV mini-series 1996) and Comanche Moon (1997, 2008), were, as the jargon has it these days, ‘prequels’. 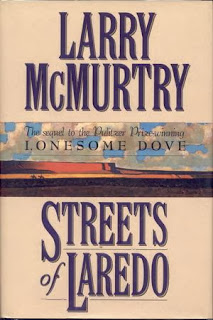 Call's life after Gus
In fact the title Streets of Laredo (which has nothing to do with the 1949 Paramount film) was originally used by Mr. McMurtry for a screenplay for a movie which was to have starred John Wayne and James Stewart that McMurtry wrote with Peter Bogdanovich in the 1970s, but which was never made as a film. McMurtry rewrote that script as the novel Lonesome Dove (1985) which became the successful TV mini-series in 1989.


So it’s quite a complicated story. Further confusion was added when an ‘unofficial’ sequel to the TV Lonesome Dove was made, Return to Lonesome Dove, which gives a different account of what happened after Call took Gus’s body back to Texas. And then there were two TV series: Lonesome Dove: The Series (1994–95) and Lonesome Dove: The Outlaw Years (1995–96). All in all, it was quite a franchise.


The novel Streets of Laredo is, I feel, rather different from the others. Obviously it has none of the Call/McCrae interplay that was central to Lonesome Dove, and indeed the prequels. And because of that it sometimes feels rather like just another Western paperback. You do get the idea occasionally that the author has dutifully inserted references to former characters in order to link the book to the others but these references sometimes feel extraneous. And you almost feel that certain characters have been hastily killed off because McMurtry doesn’t want them around any more. We are told rather casually on page 18 that Newt was killed when the Hellbitch rolled on him and on page 22 that July Johnson was drowned crossing a river. Newt was such a huge presence in Lonesome Dove that he deserved more than an en passant one-line death.


I also got the impression that some points were labored and the book could have moved at a faster pace. Pea Eye’s pages-long agonizing over whether to go with Captain Call on his latest mission, for example, was overdone and slowed things up.


Still, there is no denying that on the whole it’s another well-written story by one of the great Western novelists. And if you have become an avid follower of the characters, as millions of people (including your blogger) have, you will thirst to read of the further adventures of Woodrow Call, Pea Eye, Famous Shoes and Co. And there will be new characters, strongly drawn. Even before you pick it up you will know that there will be some seriously bad bad-guys. Because it’s the 1890s and the Indians are no longer such a threat, these will probably be half breeds or bandits. And we are not disappointed. We have the güero Joey Garza firing his German rifle with telescope sight, and the evil man-burner Mox Mox, erstwhile ally of the late Mr. Blue Duck.


There are major historical characters of the old West too: Charlie Goodnight plays a bigger part in Streets of Laredo than he did in earlier novels. John Chisum is mentioned. John Wesley Hardin and Judge Roy Bean also figure largely. McMurtry allows himself the literary license to alter history and none of these historical characters follow fact very closely, Bean, for example, being strung up by Joey in front of his own saloon. It’s alternative history of the ‘what should have happened’ variety. The author of Anything for Billy (1988) had no qualms about tinkering with reality. 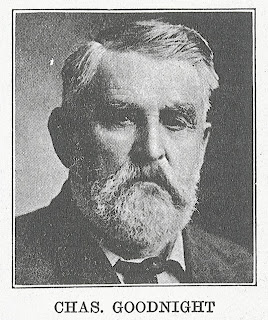 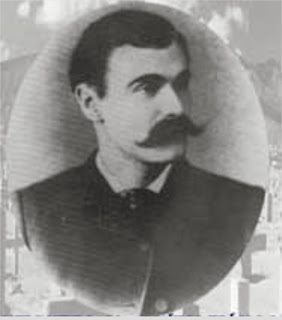 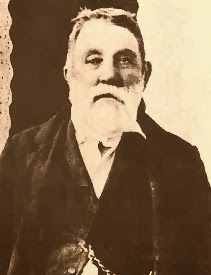 Judge Roy Bean
Streets of Laredo is, in keeping with its ‘end of the West’ theme, essentially a story of old men. Call is aged and hampered by arthritis. The railroad representative Brookshire is shocked when he first sees him. How can such a wizened little man be a famous bounty hunter? Brookshire himself is no chicken (though we are not told his age, he fought in the Civil War). Famous Shoes is ready to let his spirit wander. Goodnight must be 60 if he’s a day. Bean was born in 1825. Other characters like Billie Williams, Ben Lily and Olin Roy are all old men, more or less infirm.  There is the teenage very delinquent Joey and there are some children, to point the way forward, notably Lorena and Pea Eye’s brood, and Maria’s children Teresa and Rafael, but these latter are damaged, one blind, the other simple-minded.


Yes, I said Lorena and Pea Eye. That will be another surprise to readers of Lonesome Dove. Of all the Hat Creek boys, it was Pea Eye who finally got Lorie. Who would have thought it. It almost convinces, too.


There are too many unbelievable coincidences. Famous Shoes just happens to run into Pea Eye. The children Call rescues from Mox Mox turn out to be Jasper Fant’s. People hear vital news at too-convenient moments. But if you’ve read the other three books you’re used to that by now.


McMurtry’s women are mostly interesting and real individuals, even if they do have a tendency to nag. We knew Clara was no meek maiden. Lorie henpecks poor Pea Eye dreadfully. She even nags old Woodrow when he is shot up, in agony and like to die. But the strongest woman, and in many ways the most sympathetic character in the book, does not nag. She is Maria, the bad Joey Garza’s mother. Her courage in the face of adversity, loyalty, joie de vivre and independence of spirit make her one of the great creations of Western fiction.


Once the book was out, a TV mini-series was inevitable. Yet another actor was drafted to play Call. James Garner would have made in many ways an ideal Gus and indeed he was first scheduled to be McCrae in Lonesome Dove but that never happened, and of course Robert Duvall was magnificent in the role. To cast Garner, 68, as Call in the final story when he was finally available was therefore understandable. And he was a great attraction. Everyone loves James Garner. But he was, sadly, essentially miscast. He is supremely good at the wry, humorous, Mavericky type of Western character. To ask him to play the part of the fundamentally humorless Call was a pity. He was in 1995 also a big man in every sense and there would be no question of Lorena lifting his frail, wounded form, lighter than her daughter’s, onto a horse. She has to build a travois. This doesn’t mean that Garner was bad. He was good in everything he did and is a fine actor. But you do long for Tommy Lee. 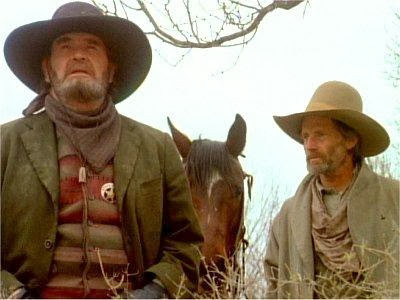 Garner as Call with Shepard as Pea Eye
Sam Shepard is such a good Western actor (see Blackthorn or The Assassination of Jesse James...) and he makes an excellent Pea. He was actually only in his early 50s at the time but acts an older man very well indeed. Other stand-outs were Randy Quaid as the scabby psychopath John Wesley Hardin, the great Wes Studi as an elderly Famous Shoes 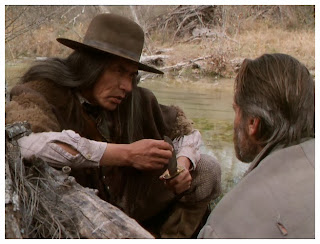 
Clara has been excised entirely from the TV show but Sissy Spacek makes a competent Lorena. 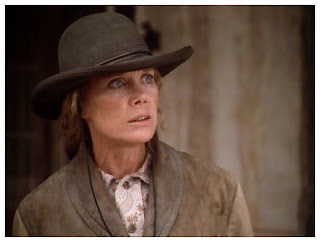 Spacek as Lorie
Brazilian Sonia Braga from Kiss of the Spider Woman is excellent as Maria. It’s a great part and she carries it off wonderfully well. Full marks also to Vanessa Martinez and Julio Carreon-Reyes as her disabled children; they were outstanding.


Crow Town was superb. It reminded me of some grim Blueberry or Jonah Hex story, squalid and surreal. 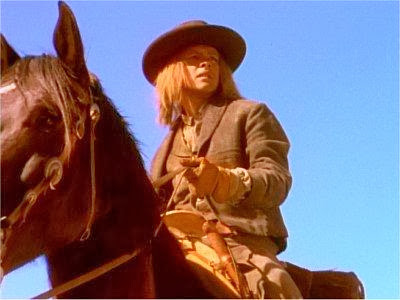 Alexis Cruz as Joey, having a bad hair (or wig) day
Call wears a lawman’s badge, which slightly changes the emphasis from the book, where he was a privately-employed bounty hunter. But that's mainstream TV for you.


Seventeen years have elapsed since Call buried Gus so we must be in the mid-1890s at the earliest, but no concessions are made to modernity. There are no automobiles or telephones. Guns and clothes are straight classic-Western accoutrements. This was true of many screen Westerns, of course. It didn’t matter whether they were set in the 1830s or 1890s; they all looked about 1870. 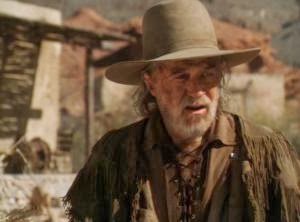 Carlin a good Billie Williams
There’s nice photography by Edward Pei (he had done Dead Man’s Walk) and the David Shire music is pleasantly and inevitably based on the folk song.


Streets of Laredo was a Hallmark TV production so the book is toned down to the brink of blandness but it does not tip over. Viewed at a sitting, however, it does have those irritating mini-action climaxes and fades-to-black dictated by advertising, so like all such TV shows it has weaknesses as a film. And we have seen so many different Calls and Pea Eyes by now that it’s hard to view all these different TV shows as four-part entity. They aren’t like Indiana Jones, for example. Unlike the books, which together make a complete four-volume Western saga, each TV series is a standalone.


Still, it’s a must-see for Western fans and even probably for normal human beings too.