Ride round this one

A good rule for Western fans to live by, as they mosey on down the trail of life, is:
Never watch a western with the word Trinity in the title.


At the end of the 60s, when true spaghetti westerns (which actually had a very short shelf-life) were already becoming tired, the ‘comedy’ westerns starring Carlo Pedersoli and Mario Girotti (aka Bud Spencer and Terence Hill) gave them, rather unfortunately, a new lease of life. They were big box office in Italy and popular elsewhere too. Finnish fans thrilled to Dom kallar mig Trinity - djävulens högra hand (such a catchy title) and Greek ones to Itan skliros kai ton elegan Trinita. Lo chiamavono Trinità, De linker- en de rechterhand van de duivel, Az ördög jobb és bal keze, sadly, they were dire in any language. 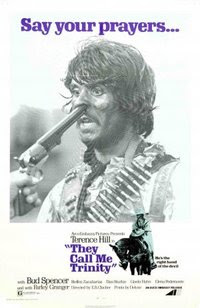 They depended on ‘comic’ fistfights and cartoon quick-draw action. Hill wandered around the West (well, Abruzzo anyway) in disgusting rags, eating disgustingly and never washing. This was thought to be hilarious. Spencer was a better actor than a block of wood would have been, but it was a close-run thing.


This one, which uses the corniest ‘plot’ of all, the wicked rancher versus honest settlers (the settlers are Mormons who have laughably false beards and buxom 1960s daughters in equal measure) is no better or worse than the others. As the first of the seemingly endless Trinity series, it is the most ‘interesting’ for a fan but that is very relative. 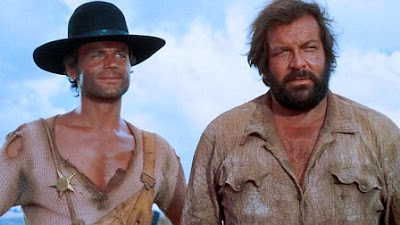 Slapstick will always be popular in certain quarters but it will only work in Westerns in the hands of a master – Buster Keaton, say, or Bob Hope. Two second-rate Italian actors and a director called EB Clucher (Enzo Barboni) don’t come close. Not even in the same universe.


Usually these ‘Westerns’ had at least one washed-up or end-of-career American star trying to make a buck but this one could only manage Farley Granger as the evil major in frock coat. In case you are wondering who the hell Farley Granger was, he had very minor character actor roles in B-movies and TV and was best known for, er, winning a ‘Daytime Emmy’ in 1977. Fame indeed.


Anyway, My Name Is Trinity is total drivel and I advise you to ride well clear of it.