By the mid-1970s Elmore Leonard's books were pretty well exclusively crime stories. Gunsights (Dell Publishing, New York, 1979) was his last Western novel – unless you count Cuba Libre (1998), which Mr. Leonard himself described as “a tropical Western” but which some consider more an historical novel. Leonard did write later short stories and screenplays, though, so he did not abandon the Western. 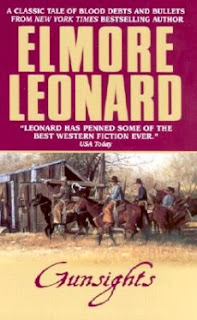 Pretty damn good
Gunsights is a great read. Though set quite late, 1893, it is a classic Western of the old school, about two tough men with a close but slightly edgy relationship, scout Dana Moon and Army man Bren Early, who, together on a plain-clothes mission in Mexico chasing an Apache chief, similar to that in Leonard’s The Bounty Hunters, stand at an adobe wall and fight the ruthless Phil Sundeen and his gang.

Sundeen has returned from Leonard's second Western novel, The Law at Randado (1954), which ended in his being dumped unceremoniously in a cell to await trial, so we imagine that he pulled strings and got off. Well, his daddy was a big rancher with wealth and influence. Anyway, he's back now and a full-on bad guy.


Moon and Early then go their separate ways but relatives of the men they killed at the wall come gunning for them, and both, especially Early, get reps as shootists as a result. It all builds to a classic land war when a mining company hires Sundeen, who has surprisingly survived, to clear land of settlers, who are Apaches, former buffalo soldiers and Mexican Americans – the good guys. And guess who lines up with the good guys? Yep, Moon and Early. 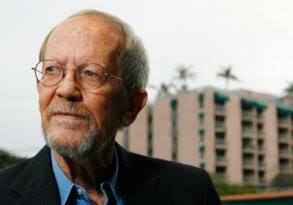 Elmore Leonard (1925 - 2013)
It’s a pretty standard recipe but the ingredients are excellently cooked. Moon and Early emerge as interesting people and the relationship between them might be described as a competitive friendship. As both their women know, they are really just boys playing at cowboys – though they enter so wholeheartedly into the part that they don’t know they are acting.


Sundeen (funny, badguys often have –een names) is maybe a tad overdrawn and a 2D villain but he’s classic Western badman. His Mexican henchman Ruben Vega is sympathetically depicted, a much more subtle and interesting character. Vega was to reappear, three years after the publication of Gunsights, in a short story, The Tonto Woman, published in the Western Writers of America Anthology (and available in the recent collection The Complete Western Stories of Elmore Leonard, Harper, 2007).

There’s also an excellent corrupt bully lawman, RJ Bruckner. Well, there’s gotta be. And I liked the tough black ex-cavalryman Bo Catlett. Bo also reappears. He 'stars' in a later short story, Hurrah for Captain Early (Western Writers of America Anthology, 1994) when he comes back from the Spanish-American War in 1898. Again, this tale features in the excellent Western short story collection The Complete Western Stories of Elmore Leonard).


As in so many Leonard Westerns, the setting is southern Arizona (around Contention and Tombstone) and if you know that part of the world, it rings true. Reading Leonard, you can almost see the terrain, almost smell it. 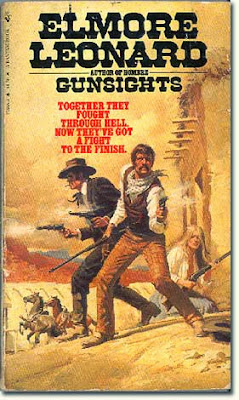 Pulpier edition
For such a relatively late Elmore Leonard book, the style is unusually discursive and descriptive. It’s no Get Shorty. It reminds me of a Luke Short story with more wry humor.


We see many of the happenings through the POV of newspapermen gathered to cover the ‘Rincon Mountain War’ as they call it, and this gives a different perspective. One of them, Neely, re-appears in Cuba Libre. The ‘war’ is observed almost objectively and with a hint of cynical humor appropriate to what is already in 1893 an anachronistic shoot-out involving slightly dime-novelish gunmen.


It all builds to an exciting ending that verges on anti-climax but just avoids it. Gunsights is not quite of the class of Hombre or Valdez Is Coming but it ranks high in the canon of the nine Western novels of Elmore Leonard and is most definitely worth a read, pards. 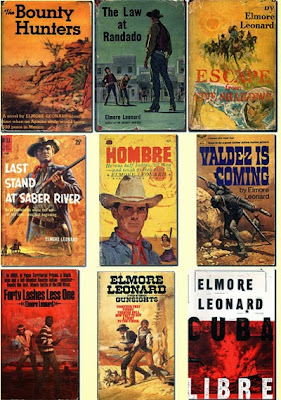