Paradise Canyon was the last in the series of tight little B-Westerns that Lone Star produced starring John Wayne in the early 1930s. It was very like the other fifteen movies the company made, a half dozen of them starring Wayne, between 1933 and 1935. It has the same music and a similar team: John Wayne, Archie Stout at the camera, Yakima Canutt as lead heavy and doing the stunts - although this one was directed by Carl Pierson and there’s no Gabby Hayes this time.


It’s pretty much the same plot. 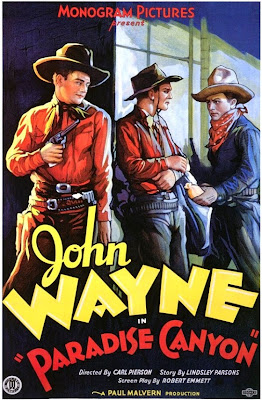 I love the posters
In this one John Wayne is ‘John Wyatt’ (he was usually John something). A police chief with shockingly bad teeth (Henry Hall) gives Wyatt the mission of tracking down some forgers on the Mexican border. To do this he has to join a traveling (motorized) medicine show, run by the amiable rogue Doc Carter (Earle Hodgins, quite amusing) who has, surprise, surprise, a pretty daughter (Marion Burns again).


It’s corny and predictable but fun.


This one has some of the best stunts of the series. Yak was on good form. 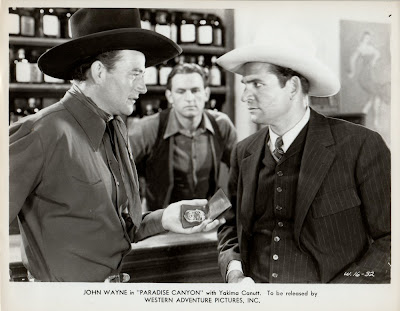 He's a G-man
Wayne sports the silliest hat he ever wore, though, a huge ten-gallon Stetson that would even make Buck Jones ashamed.


There are a couple of songs, including ‘When we were young and foolish’. Wayne seems to lose an awful lot of guns. The Mexicans are cartoon versions who speek like theess. The rurales stoutly assist our hero without a qualm.


The heroines in these films made no attempt at historical costume and always wore 30s dresses and hairdos. 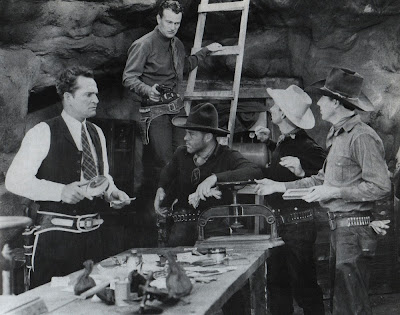 Duke gets the drop on the counterfeiters
You will not be stunned to hear that John Wyatt beats the head forger bad guy (Yak) and gets the gal.


A standard Saturday-morning oater, this has no pretensions at all but is a straight-down-the-line B-Western of the old school. It’s still better by a dusty mile that 99% of the spaghetti westerns churned out in the 60s and 70s.