Blaxploitation could also be applied to Westerns. This 70s effort had Fred Williamson (Kansas City Chiefs football star turned action movie hero) as a soldier back from the Civil War, avenging the murder of his dear, sweet mom by five evil badmen. It’s an absolutely classic cliché as Fred/Josh hunts them down and picks them off one by one.


There is electronic music (Mike Irwin) which merges into 70s sub-rock and is irritatingly repetitive. The print I saw was very pale and it made the winter Monument Valley set even more lunar than usual.

The dialogue was evidently written by a committee of pupils from Utah junior high schools. Either that or by a computer inputted with every Western cliché ever written and asked to come up with a random sample. Actually, though, Fred wrote it. As a writer, he made a great defensive back.


The trouble with such movies is that to be even remotely credible the white actors would have to treat Joshua in such a way and refer to him in such language that would have been totally unacceptable to 1970s audiences, especially black ones. The n-word would have been the least of their epithets. But of course they call him ‘hombre’ or something safe all the time.


Fred may have been good in Shaft-type movies shooting from 70s Camaros or Mustangs but he can’t ride real mustangs to save his life. Nor can most of the other actors. Their knees and elbows are everywhere and their hats fall off. If you are looking for a kind of 1970s Deets from Lonesome Dove, forget it. Danny Glover he ain't. 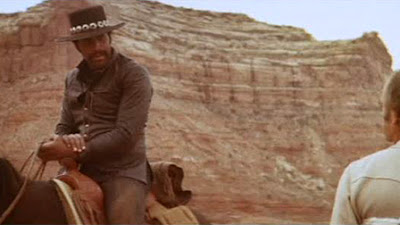 The girl kidnapped by wicked Cal Bartlett seems to be affected by Tombstone syndrome (a Western fore-runner of Stockholm syndrome) as she starts smooching with her captors.