To be brutally frank with you (and that may be my only fault, frankness) I wouldn’t put Elmer Kelton right at the very top of the Western writers’ tree.


I don’t mean his books are unreadable, or even pulp Westerns, but set against those by cool writers like Robert B Parker or Elmore Leonard, or literary ones like Ron Hansen or Thomas Berger or authentic, earthy ones like Charles Portis or Glendon Swarthout, well, they aren’t quite in the same league. 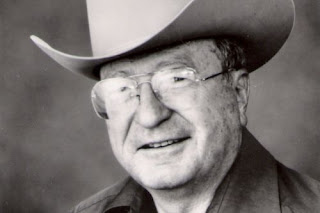 Elmer Kelton (1926 to 2009)
But Kelton books are usually tightly constructed, pacey little Western thrillers. You might say he was a more modern Luke Short. And that is no criticism, far from it.


Joe Pepper suffers from a couple of basic problems: it’s written in the first person, as if spoken by the hero, Joe Pepper, in a condemned cell, recounting his life to a preacher – so there’s a lot of second person you too -  while they build the scaffold. It’s in the vernacular but it’s all neatly paragraphed and well-constructed. It doesn’t ring true at all as a spoken account. If it had been modern times and a tape recorder had been running, say, like Little Big Man or something, it might have worked but as it is, it falls between the two stools of spoken meanderings and careful, written prose. 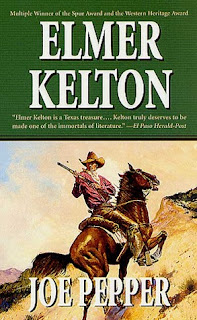 Entertaining but in no danger of winning a Nobel
Another problem is the ending, which is a trick one, a sort of last-minute deus ex machina. It doesn’t work.


Having said that, it’s by and large a fun book and you certainly warm to the central character, Joe. The language is down-home Texas but isn’t overdone; it is quite well handled and not too Owen Wister-hokey. The pacing is a bit odd because the book covers the period from the Civil War till well after the Johnson County War, thirty years or more, yet the majority of the events narrated all seem to happen in the late 1860s.


In the classic Western tradition, early in the book Joe fights an evil, grasping big rancher who wants to run him off his homestead. Joe’s wife, his beloved young Millie, is killed in a siege of his farmhouse. Joe gets his revenge, flees to Mexico, and his adventures, on both sides of the border, begin. They take him West (naturally) to El Paso and beyond. He becomes a gunman and a card-sharp but his fortunes decline with age and there’s a fairly pathetic end to his not-too-glorious career.

Maybe it's better in German
Joe Pepper isn’t really in the top drawer of Western stories but it is an entertaining read, and I would recommend it for a wet afternoon when there are no Westerns on TV.