Lee Van Cleef in a cassock

Not so much a spaghetti as a matzo-ball western, this one was filmed in Israel. It’s a spaghetti really, though, because it’s directed and written by Gianfranco Parolini (under the name Frank Kramer), who had done Sabata, and produced by an Italian-Israeli outfit. It was a top-of-the-range Israeli-spaghetti in the sense that it assembled American stars and had no fewer than three big end-of-career names, Lee Van Cleef, Jack Palance and Richard Boone. 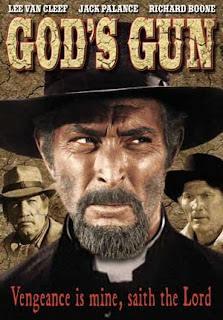 Rev. Lee
However, big names or not, it’s a spaghetti in the sense that the dialogue is abysmal. Credited to Parolini and John Fonseca, it could have been written by an ESN cuckoo on Valium. Zero out of ten also for ‘Ralph Zucker, dialogue coach’.


The sound is dismal, as always in these films, although the same actors dubbed as acted, by and large, and so at least there is some semblance of lip-synching. The gunshots are absurdly loud, as ever, and you get the same sound whether nonentities are shot by pistol, rifle or shotgun. The music is the usual spaghetti electric guitar noise (Sante Maria Romitelli, it says. Santa Maria, surely?)


There is some minimal attempt at decent photography (Sandro Mancori). For example, the opening and closing shots are framed by a puppet theatre (a very Italian notion). But visually it is mediocre at best and an Israeli desert looks more like Spain than it does Texas.


The real hero, in fact, is none of the big name aging Western stars at all but a 14-year old boy, Johnny (Leif Garrett, 70s teen heart-throb, sadly not much of an actor) who bravely revenges the death of Lee the priest (it’s a very Catholic Western town) by seeking out Father Lee’s twin brother, Lee2 the gunman, who comes to wreak vengeance. 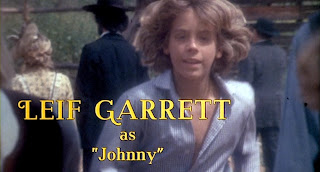 There has to be a kid
Boone is a cowardly sheriff who won’t face down the Clayton gang in Juno City. He has about three lines to say. Hardly worth going to Israel for. Palance is the boss Clayton, roguish but sadly looking his age and often grinning vacuously. Jack’s son Cody is in it too. 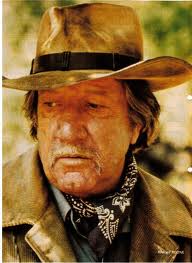 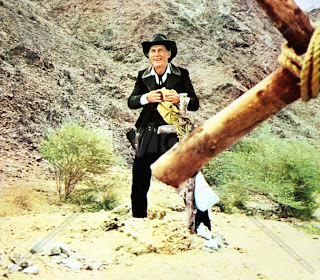 Palance grins vacuously
There are the statutory violence and rape scenes, though they are comic-book unrealistic and not shocking, because false. The lawmen’s stars look as though they have been borrowed from the Christmas tree. In an ‘Abilene’ flashback (they used the same town), one bystander in a Stetson has forgotten to remove his 1970s spectacles.


Lee2 does look quite cool when he dons his brother’s cassock. There is the inevitable Lee/Jack showdown. Guess who wins.


To be fair, and I like to be fair, watching this movie is more fun than watching butter turn rancid.