Larry McMurtry’s Comanche Moon, the novel, last of the Lonesome Dove tetralogy to be written but second in the series chronologically, was a rather better book, I thought, than its predecessor Dead Man’s Walk, having more sweep and scope, and more memorable characters. Of course it was bound to be made into a TV mini-series (that was probably one of the main aims of writing it) but the TV version was rather disappointing.


One of the main reasons for this is that the central character of the book, almost the hero, is hardly in fact Augustus McRae or Woodrow F Call, but Captain Inish Scull. He is a larger-than-life personage, brimful of color, one of the most picaresque characters in Western fiction. The casting for TV of Val Kilmer was regrettable. Kilmer had been Billy Bonney in the Gore Vidal-penned TV Billy the Kid in 1989 and of course he was a splendid Doc Holliday in his second Western, Tombstone, in 1993. He had also briefly appeared in The Missing. But, though I’m sorry to say it, he doesn’t carry off Inish Scull at all. He caricatures the part and does not provide enough (metaphorical) weight. He isn’t helped by either the script or the make-up department. The latter provides him in later life with a shockingly bad white fright wig and whiskers which make him frankly ridiculous. 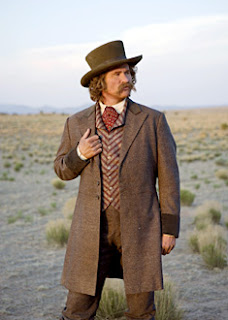 Kilmer miscast as Scull
Despite the fact that Mr. McMurtry was, with Diana Ossana, an executive producer and writer on the TV show, the film is a pretty pale rendition of the book. Of course they have to excise scenes and telescope action and dialogue – even with three 85-minute episodes you aren’t going to get the whole 750-page book in. Yet that doesn’t seem to stop the scriptwriters adding scenes, such as bringing Clara back again and again, which damages the dramatic impact of her marriage and departure and its effect on Gus. And while the books are pretty violent and raunchy in parts and clearly are going to be toned down for ‘family viewing’ (dread phrase) on TV, the dropping of the removal of Scull’s eyelids is actually a radical departure and a serious weakening of the power of the book. Other changes are hard to understand: Goyeto the skinner, for example, is not hoist with his own petard but killed by a rattlesnake thrown by Scull from the pit. Idahi the Comanche is not killed by Blue Duck but becomes the august personage of Mr. Schellenberg and is almost a second-in-command to Buffalo Hump, as well as Blue Duck’s uncle. Difficult to see the dramatic or televisual gain. 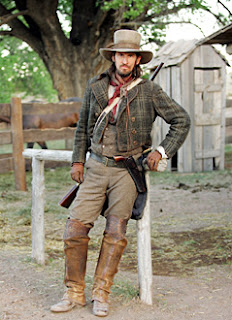 The excellent Ray McKinnon is Long Bill again. Very good.
While it is good to see the excellent Ray McKinnon back as Long Bill Coleman (and Pearl’s urging him to become a preacher is given new and amusing meaning when we think of Deadwood), we have to get used to yet more actors in the key parts. It’s off-putting.
This time Wes Studi is Buffalo Hump. Now I think Mr. Studi is an excellent actor. Toughest Pawnee in Dances With Wolves in 1990, he was a notable Geronimo in Geronimo: An American Legend in 1993 and he was the great Famous Shoes in the Lonesome Dove sequel Streets of Laredo in 1995. He was good in all of these, and as Wovoka/Jack Wilson in HBO’s Bury My Heart at Wounded Knee in 2007. But he doesn’t convince as Buffalo Hump. He seems to labor the Comanche dialogue and while he doesn’t have a hump (that’s OK, nor did Eric Schweig in Dead Man’s Walk), he suddenly grows one so that Blue Duck can pierce it with the lance. Most odd. 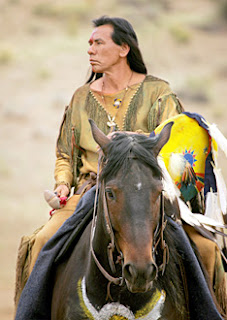 Wes Studi, formerly Famous Shoes, has now become Buffalo Hump
We have a third Clara (Linda Cardellini, not too bad), another Maggie (Elizabeth Banks, OK, I guess), Pea Eye is now played by Troy Baker, Jake by Ryan Merriman, and so on. They’re all OK though I thought few stood out. 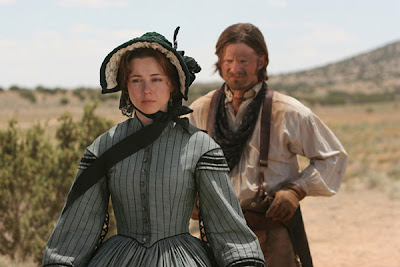 Yet another Clara, this time Linda Cardellini, with Gus (Steve Zahn)
As for the principals, we have Karl Urban as Woodrow and Steve Zahn as Gus. Mr. Zahn deserves top marks for his study of Robert Duvall. He has got the diction and a lot of the gestures pat and makes a very convincing younger Gus. Mr. Urban tries to do the same by modeling himself on Tommy Lee Jones but with less success. 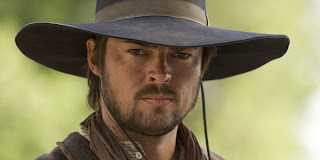 Karl Urban as Woodrow
Sal Lopez is Ahumado and is not bad. He looks like a Mexican Lee Marvin. But his character is toned down too much and Lopez does not get the chance to show us the truly evil Mayan bandit of the book. His end is weaker too. Fredrick Lopez as Goyeto might just as well not have been there. Jake has no curls. Pearl (Melanie Lynskey) is not fat enough and Blue Duck (Adam Beach) is not mean enough. The Buffalo Horse is not big enough.


So there are weaknesses of casting and writing which do not help at all.


The book suffers from some chronological inconsistencies and the TV movie compounds them (perhaps while trying to remedy them). For example, episode 2 opens in 1858 with the great Comanche raid of 1856. Governor Pease talks in the script of “our old Confederacy” being finished whereas he was in fact a supporter of the Union.


Of course we have those tiresome commercial breaks when watching it on TV and even on DVD all those regular mini-action climaxes followed by fades-to-black do become irritating and damage the narrative flow. But that’s TV Westerns for you.


Simon Wincer directed it. He had directed Lonesome Dove and done a wonderful job. He had also done the very good big-screen Quigley Down Under in 1990 with Tom Selleck and worked again with Selleck in the high-quality TV Monte Walsh in 2003, so he knew what Westerns were about. But he seems to have lost his touch with Comanche Moon. Not that it’s bad, exactly, but it’s more noticeably a bland TV version. You get the impression that by 2008 the formula had become so diluted as to struggle to interest us. Lonesome Dove had become really just a commercial franchise.