Until the recent HBO film And Starring Pancho Villa as Himself, the 1930s Viva Villa! was the best movie in English about the Mexico revolutionary hero. Wallace Beery is absolutely splendid. He gives us a Villa full of charm, full of life, a great womanizer, perhaps rather too much of a simpleton but a man of great heart. It’s a marvelous performance. The Mexican authorities weren’t keen because Beery usually portrayed buffoons or villains. In fact Beery had first played Villa in a 1917 silent series, although there, Villa was the bad guy. Edward G Robinson and Clark Gable were considered for the role of Villa. The mind boggles. 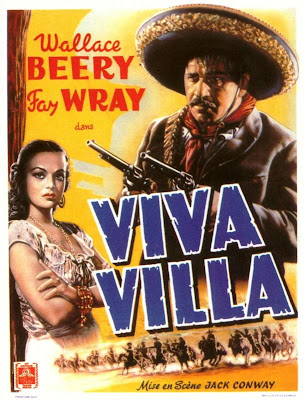 Beery and Wray: hot properties
The story comes from a novel, Viva Villa!: A recovery of the real Pancho Villa, peon, bandit, soldier, patriot by the left-wing writer Edgcumb Pinchon (1933). Pinchon was General Secretary of the Workers' International Defense League and a great admirer of Villa. David O Selznick hired Ben Hecht, screenwriter of the very successful Scarface, to adapt the book (in fact there is something gangsterish about his Villa) and he hired Scarface director Howard Hawks to direct.


The tale starts with the whipping to death of Pancho’s father by a cruel haciendado. This drives Pancho into the hills and he becomes a great bandit chief. He comes back and lines up some hanged men as a jury before executing the ‘Spanish’ landowners who have taken the land from the peones. This job is given to ‘Sierra’ (Leo Carrillo), a portrayal of Rodolfo Fierro, Villa’s sadistic private executioner. It was a very violent film for the mid ‘30s.


The obligatory gringo makes an appearance in the shape of Johnny Sykes, a John Reed-ish journalist (Stuart Erwin) who befriends Pancho and in fact is conveniently with him the day he is finally shot. 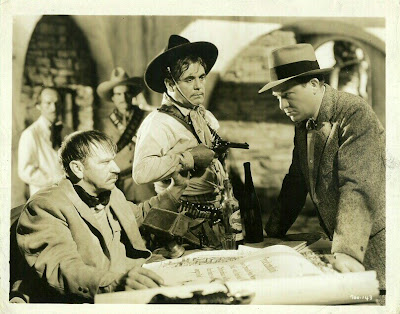 Obligatory gringo based on John Reed (sort of)
The film plays fast and loose with history (Villa becomes president) and vastly oversimplifies, but to be fair, it does start with a disclaimer. There is a posh dame, Teresa (Fay Wray, famous for King Kong the previous year) who announces in her first line with that clipped British accent that was felt to be required that she is very “gled” to see Pancho. A scene of her being whipped, which mirrors the whipping of Villa père, has been cut from the version usually shown. But she cops a bullet from Sierra, and her brother Felipe (Donald Cook), previously pro-Villa, now vows revenge. “I’ll kill him if it’s the last thing I do.” (You could get away with those clichés in 1934). And so the murder of the hero in 1923 - in this movie it happens right after he has won, then given up the presidency - is an act of vendetta. 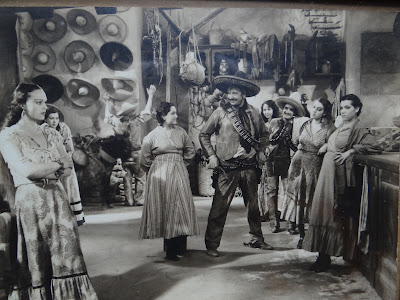 Señoritas show more or less interest in Pancho.
Mexican saloons have to have very large hat racks.
There were so many feuding generals and caudillos with all their political machinations, yet this film has to invent one more, or perhaps telescope them all into the evil General Pascal (Joseph Schildkraut).


The idea of myth and reality is played with well here. Villa changes his plans and takes Santa Rosalia because Johnny has got it wrong and printed an article saying the town has been taken. As it is in the paper, it must have happened, so he’d better do it. Dying, he asks Johnny to tell him what his last words were. 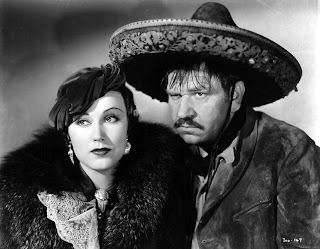 Gangster and moll
There is some great photography (Charles G Clarke and James Wong Howe) and there are many powerful images (I liked the cradle made from bandoliers). Jack Conway was credited as director but Howard Hawks and William A Wellman also worked on the set. A lot of Hawks’s footage is said to have been lost in a plane crash.

There is a story that the actor originally cast for the Johnny Sykes role, Lee Tracy, had to be expelled from the country. It was quite a scandal: in November 1933, during location filming in Mexico, Tracy is said to have got drunk and urinated from his hotel balcony onto a passing military parade. He was arrested, fired from the film and replaced by Stuart Erwin, and Howard Hawks was also let go as director for refusing to testify against Tracy, and was replaced by Jack Conway, the credited director. However, in his autobiography, cinematographer Charles G Clarke said that the incident never happened. Tracy, he said, was standing on the balcony watching the parade when a Mexican in the street below made an obscene gesture at him. Tracy replied in kind, and the next day a local newspaper printed a story that said, in effect, Tracy had insulted Mexicans, Mexico and the Mexican flag. The story caused an uproar in the country, and MGM decided to sacrifice Tracy and Hawks in order to be allowed to continue filming there.

The real Pancho Villa
The location shooting in Mexico, the masses of extras and the battle scenes pushed the budget up to almost a million dollars, an astronomical sum for those days. But Beery was enormously popular and the movie recouped its production costs in under a year.


The Herbert Stothart music is based on ‘La Cucuracha’, the cockroach, the Villa ‘theme song’. It’s well done. Sadly, some of the horse stunts look pretty brutal.