The worst film about Pancho Villa

The worst of all the films made about Pancho Villa was a ‘comedy’ Western made in Spain starring Telly Savalas as a ludicrous New York Villa. It was 1972, the year before Kojak, and Savalas was honing his accent for the tough cop act in readiness.


The story centers around the raid on Columbus, NM in 1916. We start with Villa in a cage on a train having his head shaved as a convict (presumably to give an excuse for Savalas to play the rest of the movie shaven-headed). His sidekick, Clint Walker in a sailor’s uniform, comes up behind in another train on the same track and rescues him. 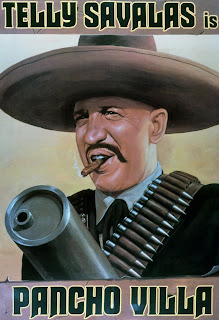 He looks much more Mexican in the poster. But even there he looks Greek.
Clint is then betrayed by a crooked American arms dealer (Luis Dávila) in Columbus and he and Pancho decide to get their revenge. While they are in town revenging, Pancho learns that his arch-enemy ‘General Goyo’ will be pulling in on the train from Washington so he decides to wait and waylay the train.


Meanwhile, an incompetent US Army colonel played by Chuck Connors fails to do anything about the raid.


Connors must be one of the world’s worst comedians. Savalas was dreadful. Clint Walker could do nothing with the junk he was in. Anne Francis as Clint’s estranged wife was equally lousy. Clint Walker, Anne Francis and someone else (I forget who but who cares)
The ‘jokes’ depend on how amusingly Pancho shoots people.


It  was written and directed by Spaniard Gene Martin (Eugenio Martín). He had done three other Spanish junk Westerns.


The music (Antón García Abril) is especially irritating. Over a train scene Savalas sings a totally inappropriate early 70s pop song at the end, though it must be said that in this regard he did a better job than Bob Mitchum in Young Billy Young. 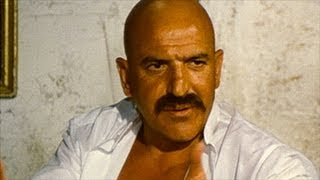 Who loves ya, baby?
Wikipedia tells us that producer Bernard Gordon wrote in his autobiography that Telly Savalas and Clint Walker did not get along during the shooting of the movie. Savalas made attempts to upstage Walker and even insisted on changing some two-shots into solo shots. Mr. Gordon may have confused us with some who gives a blank.


It ‘climaxes’ with a phony collision between two trains.


I really can’t think of anything good to say about this movie.