The lives of some of the mountain men of pre-Civil War America were so colorful and dramatic that it is surprising that more Western movies haven’t been made about them. There was, however, a little flurry of mountain-man movies made in the 1970s: Man in the Wilderness, Death Hunt, The Life and Times of Grizzly Adams, Mountain Family Robinson, Mother Lode and The Mountain Men. Most were pretty poor, though. Recently there has been the big Leonardo Di Caprio picture The Revenant, about Hugh Glass, which is rather good. 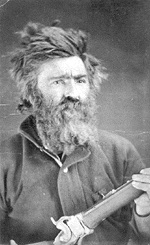 John 'Liver-Eating' Johnson or Johnston
“Jeremiah Johnson” (c 1824 to 1900), in reality and more prosaically John Johnson or Johnston, was one such. Known as ‘Liver-Eating Johnson’, he served on a fighting ship during the Mexican war before moving to the Western wilderness. He is supposed to have cut out and devoured the liver of the many Crow Indians he killed, in revenge for their murder of his wife. However, this early-70s Robert Redford vehicle doesn’t go that far and Mr. Redford is far too politically correct to go around eating Indian livers. He also has acquired the Old Testament name, a reference perhaps to the famed Jedediah Smith.


The film is based on the historical novel Mountain Man by Vardis Fisher and the story Crow Killer by Raymond W. Thorp and Robert Bunker. 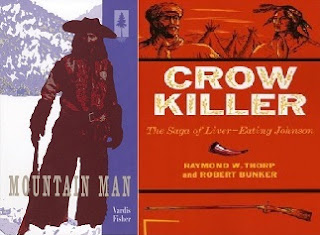 Source books
The movie is a self-consciously big picture with certain pretensions. It was shown at the 1972 Cannes festival. It starts with an “overture” as the not altogether suitable ‘conquering of the West’ type music by Tim McIntire and John Rubinstein is played over an artistic still, and it has an intermission, called an entr’acte. Oh, please. The Sydney Pollack direction is arty, with too many dissolves. In fact the movie is a sort of Western Out of Africa.

The screenplay is sometimes self-consciously literary or archaic (no fewer than five writers worked on the script) although there are some good attempts at the earthy and unrefined language that we assume such men must have used. In reality many would have spoken a blend of Indian tongues, Spanish and French.

Pollack (The Scalphunters, The Electric Horseman) was an urbane New Yorker and as a Westerner he was unconvincing. He was conspicuous on the set in 1970s urban clothes and attitudes. He was a good character actor but frankly, as a director of Westerns, he was pretty poor. The worst point was his pacing. His films were too long and needed vigorous editing, which they didn’t get. Pollack’s actors were nominated for any number of Oscars but he’s not even in the top 100 of Western directors.


Certainly Jeremiah Johnson is visually fine and worth seeing at a movie theater rather than on the TV at home. Photographed by Duke Callaghan, better known for his television work but very competent on the big screen, with dramatic Utah locations (the making-of documentary tells us that the film was shot “literally” in Redford’s back yard; he must have a big garden), its largely winter scenes are powerful and very cold. The film has a grandeur and is as much a hymn to the beautiful American north-west as it is the story of a rugged individualist.


Redford is quietly solid, if coiffed. 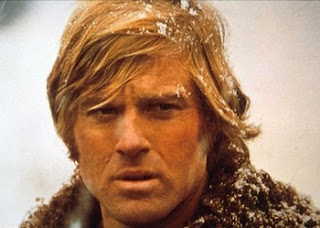 Redford: worthy
The splendid Will Geer in his last feature-film Western is feisty as the fellow mountain man who teaches the green Jeremiah the business. He actually enters pursued by a bear though I don’t know how Shakespearean the reference is. 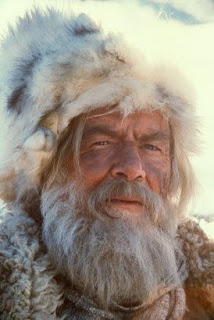 Geer: splendid
Delle Bolton and Josh Albee do well too as Redford’s Flathead wife and mute, traumatized adopted son, whose loss he spends the last part of the movie avenging. I also liked the French-speaking Indian chief, Two-Tongues Lebeaux (Richard Angarola) and the slimy, evil preacher Reverend Lindquist (Paul Benedict very good in this short part). Westerns do often do quite a good line in slimy preachers, as doubtless you are aware.


But in fact the film is long, quiet and introspective and not the action movie that one might have imagined.


Real mountain men were probably more eccentric, brutal and smelly than Robert Redford and the whole thing comes over as a bit sanitized, a sort of National Geographic Western. Still, it’s certainly a visual feast and a fine advert for the Utah Tourist Board. There is a story that Eastwood was supposed to have starred and Peckinpah to have directed. It might have been just a shade different…


The real Johnson lived on to fight on the Union side in the Civil War. During the 1880s he was appointed deputy sheriff in Coulson, Montana, and a town marshal in Red Lodge, MT and he died in bed in 1900. If you go to Cody WY (a very good town, by the way) you can see his grave. He was reburied there, with Redford as one of the pallbearers. 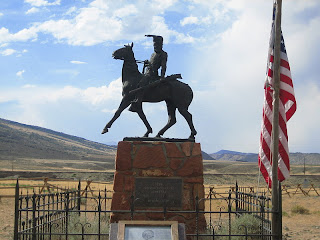 Monument, Cody, WY
Certainly a movie worth seeing, preferably on a big screen, but not the greatest Western.