It is with some trepidation that I venture in this blog even to paddle in the shallows of those vast, dangerous waters of Custerology. George Armstrong Custer excites, now as much as when he was alive, such partisanship. There are those who admire, even adore the man as the military marvel of his age, the Boy General, the greatest hunter, plainsman and Indian fighter of them all, and there are others who consider him a mountebank, a rash, reckless, glory-hungry Indian-hating fool who deserved what he got. And there is so very much Custeriana out there, ranging from in-depth scholarship in learned journals to toy Custer pistols (the latter rarely accurate as he used a brace of stubby British Webleys). Surely only a fool would venture into these murky waters and brave the sharks of both kinds, pro- and anti-Custer, all too ready to snap at his vulnerable white body and his timorous, splashing efforts? 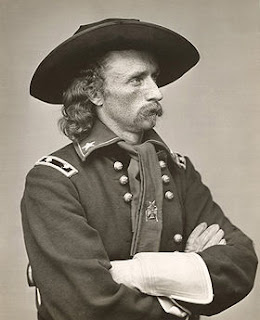 Custer's own favorite portrait
In this blog we have looked at various figures of Western mythology, comparing the historical reality of the lives of Billy the Kid, say, or Wyatt Earp or Kit Carson, to the way they are portrayed in popular culture, notably Hollywood movies. But to attempt such a treatment of Custer in a couple of short essays here would be as rash as the general is himself often accused of being as he plunged without reconnaissance into his attack against an unnumbered foe at Little Bighorn (or the Washita, come to that). 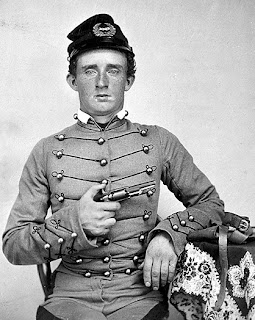 Custer at West Point (class of '61)
Still, what I can do is review a book I have just re-read on the subject. That should be safe enough.


I have described some of the work of Robert M Utley before, and in complimentary terms too. He wrote an excellent study of the Lincoln County War and one covering some common ground on Billy the Kid. I reviewed them in January and February 2011 and you can click the links if you’d like to know more about those Utley books. 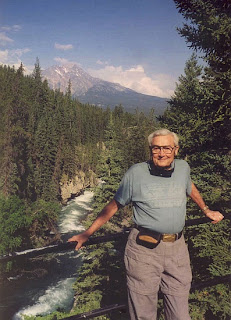 Robert M Utley
But I must say right away here that good as those books were, they were not up to the standard of his quite exemplary biography of Custer: Cavalier in Buckskin: George Armstrong Custer and the Western Military Frontier (University of Oklahoma Press, Norman, 1988, revised edition 2001). I read the revised edition (which I bought in 2005 at the excellent Colorado History Museum in Denver).

Magisterial
How over-long so many modern biographies are and frankly what turgid reading they often make! All modern writers should take Dr. Utley’s work as a model. In this readable, elegantly written book of only 212 pages the author takes us in polished prose from Custer’s youth and years at West Point to his sheer brilliance in the Civil War and his time of mixed success and failure on the frontier, through to Little Bighorn and beyond into the wild territory of his posthumous reputation. It is a masterly effort.


The book shines out as balanced, thorough, researched and reliable. You feel, once you have finished it, that you have read the definitive biography of Custer.


I especially enjoyed the first and last chapters.


For Utley opens with a brilliant ten-page essay on Custer’s immortality. It is a superb summary which takes us from the first press reports of Little Bighorn and initial reaction to them (Sherman and Sheridan heard first about the disaster from the newspapers) to the quick polarization of views of the event along political lines. “Democratic journals portrayed the dead hero as the tragic victim of Grant’s Indian policy," Utley tells us, "while Republican papers assailed him as a foolhardy glory hunter.”


The huge body of exaggeration, what today would be called spin, and even downright deliberate falsehoods spewed out by the popular press soon found its way into biographies, starting with that of the dime novelist Frederick Whittaker who idolized Custer and rushed his effusive and florid tale into print within six months of the Little Bighorn. There followed a string of others.
Custer’s widow Elizabeth, Libbie, following her ‘Autie’ who in 1874 wrote his own My Life on the Plains, wrote three books herself, Boots and Saddles (1885), Following the Guidon (1890) and Tenting on the Plains (1891).
As well as writers of popular poetry and doggerel, great literary figures such as Whitman, Whittier and Longfellow added their voices to the hymns of praise. Painters and illustrators got to work without delay glorifying Custer’s last fight, notably the Cassilly Adams painting worked into a lithograph by Otto Becker and distributed in great numbers by the Anheuser-Busch Brewery; it adorned the walls of saloons all over America and beyond. Utley says that the panoramic painting has been “viewed by more low brows and fewer art critics than any other picture in American history.” 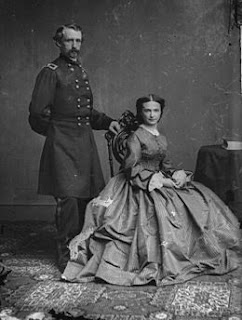 Autie and Libbie: probably not the perfect marriage so often portrayed
Wild West Shows, most famously Buffalo Bill Cody’s, staged ‘Custer’s Last Stand’ as the climax to their performances and as soon as motion pictures came along, Little Bighorn was one of the first subjects to be shown. There were silent movies in 1912, 1914, 1916, 1921, 1924 and two in 1926. 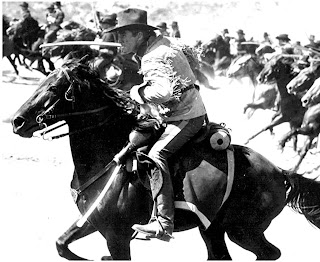 You may prefer an Errol Flynn kind of Custer...
During the Great Depression, however, a new school of debunkers took up the Custer story. For example, in 1934 Frederic F Van der Water published Glory Hunter. In this, Custer was arrogant, tyrannical, vain, reckless and incompetent. This revisionism intensified after the Second World War and reached its zenith with the Arthur Penn-directed film Little Big Man (NGP, 1970) which gives us Custer (Richard Mulligan) as an insane butcher. Of course in that movie Custer’s 7th Cavalry was doing double duty for American slaughter of Vietnamese combatants and non-combatants. Each generation has its own George Armstrong Custer. 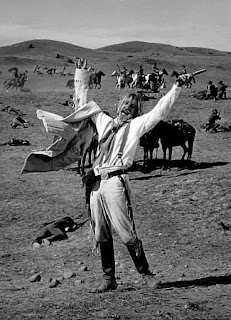 ...or a mad Mulligan kind of one
In the 1980s archaeological excavations of the battle site added to knowledge of and interest in what happened there. As for movies, they have never stopped. Bighorn in 2010 (Steven Alexander as Custer) was followed by The Hard Ride in 2013 (Christopher Atkins) and most certainly there will be other celluloid Custers to come. 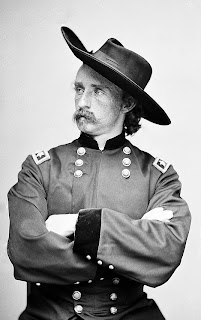 George Armstrong Custer
Chapter 9, Judgments, is also a fascinating read. It is here that we get closest to the ‘true’ Custer. On balance, Utley comes down on Custer’s side. Without hiding his mistakes and his faults, the author exonerates the general of the most common criticisms, that he divided his force needlessly, that he fought the battle a day too soon, that he disobeyed Terry’s written orders. None of these was the case.

Others come in for their share of the blame: Crook, Benteen and Reno in particular. Another villain of the piece was the institutionalized US Army thinking towards the Indians and the inappropriate style of warfare used to combat them. It is a most balanced essay which, you feel, almost for the first time, gives a true-to-life picture of the man and the battle.


Of course, that doesn’t mean I won’t enjoy my next viewing of They Died With Their Boots On.