It moves at a stately pace

This movie is best viewed as the last part of a Delmer Daves trilogy. In 1950 Daves directed, for Twentieth Century-Fox, a very good, and seminal film, Broken Arrow, starring James Stewart. In 1954 he both directed and wrote another 'Indian' picture, Drum Beat, this time with Alan Ladd, over at Warners. In 1955, back at Fox, he wrote and was scheduled to direct a third, White Feather. In fact, he left Fox just at that time and direction fell into the hands of replacement Robert D Webb. Still, White Feather is recognizably a Daves project and it plays further variations on a Daves theme. In some ways, Delmer Daves made Broken Arrow three times. 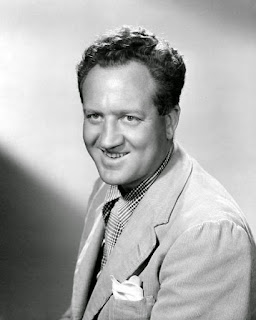 The titles say something, in fact, because a broken arrow, Cochise's, was a sign of peace after war, while drum beats, those of the Modocs, are a sign of looming conflict. A white feather is more ambiguous symbol: it was not supposed to be the kind of plume sent by base people to presumed cowards in early twentieth-century British melodramas. The white feather concerned here, attached to a dagger and thrown at the feet of an enemy, is a gauntlet-like challenge to fight from a Cheyenne brave. Will it be taken up or not?

Widescreen color by Lucien Ballard - impressive
The main attraction of this picture is the budget. Fox did not stint. It is big in every way. There are huge widescreen vistas of ‘Wyoming’ (Durango) beautifully photographed by Lucien Ballard, no less. And there are vast numbers of extras, both Indians and US Cavalry. It’s really quite impressive.


Sadly, though, it’s rather ponderous and lumbering as a film. At 102 minutes it is far from fast-paced and you feel that it needed snappier editing. We have to put this down to the director.


Robert D Webb was not in the front rank of Western movie directors. He had served as assistant director on Fox’s Jesse James in 1939, and White Feather was his first Western in the director’s chair. The following year, 1956, he directed The Proud Ones with Robert Ryan and Virginia Mayo (in which Ryan was splendid), and Love Me Tender, the rather poor Elvis Presley film purportedly about the Reno brothers but not really. In 1960 he helmed the so-so Alan Ladd vehicle Guns of the Timberland. He also directed a Rawhide episode and a Daniel Boone one on TV. It isn’t that impressive as a Western CV. It's a pity that Daves wasn't in the chair, although having said that, Drum Beat was pretty ropey.

Robert D Webb: was not Raoul Walsh, I fear
Broken Arrow had a brave hero acting as a go-between for noble Apaches and racist whites, and marrying a fair Indian maid. Drum Beat, on the other hand, had as its hero an Indian fighter and the story was really a regression to the old style of Hollywood Western, with Indians (Modocs this time) as the baddies, and in that picture the hero went for a safe white bride. Still, Daves did try to moderate the anti-Indian sentiment in the latter movie and in both statesmanlike reason is seen to prevail over hot-headedness (on both sides) and violence.

White Feather immediately reminds us of those earlier pictures. For one thing, Sonseeahray is in it: she’s called Appearing Day this time, which is rather poetic (and easier to say and spell). Debra Paget was extraordinarily graceful. She was only 16 when Broken Arrow was filmed and she went on to corner the market in beautiful Indian girls (see The Last Hunt, for example, in which she pipped Anne Bancroft for the part of fair Indian maiden). And not only was the dreaded 'miscegenation' allowed in 1955, Appearing Day didn't have to die. It is noticeable, though, that she has much less make-up than she did in Arrow: she's whiter. So that's OK. 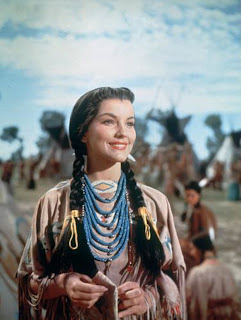 Debra Paget does her beautiful Indian princess bit again
Daves had spent some time in his youth with the Hopi and Navajo Indians and had a particular affinity for their side of the story, which before the 1950s was rarely told. He also did a lot of research - he said. Broken Arrow is reasonably 'historical', yes, but Drum Beat is, factually, unmitigated tosh, almost offensively so. This one, White Feather, is betwixt and between.
This time it’s not James Stewart or Alan Ladd liaising with the Indians and doing a one-man diplomatic mission, but young and skinny Robert Wagner, as Josh Tanner. Wagner was fresh from his second billing as Spencer Tracy’s son Joe in Broken Lance and a couple of years after White Feather was to be Jesse James in Fox’s remake of that yarn, The True Story of Jesse James (also with Jeffrey Hunter).But he only did four Westerns in total and didn’t seem to be very enamored of the genre. In White Feather he is satisfactory, I guess, no complaints really, though he hardly sets the prairie on fire. You can’t help thinking it would be a different matter with a major Western star leading, Peck, say, or even Widmark. 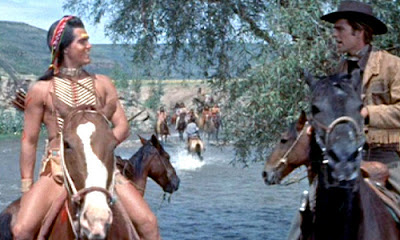 Jeffrey Hunter good as Little Dog
As far as the Indians go, apart from Debra we first have a rather good Jeffrey Hunter. The following year he was to be the only half-Indian Martin Pawley in The Searchers but here he is Little Dog, the full-blooded son of the Cheyenne chief. His friend is the bellicose American Horse, played by Hugh O’Brian. O’Brian was already a Western vet – this was his eighteenth oater – and that very year he was to start his extraordinarily long run as Wyatt Earp on TV (226 episodes, 1955 – 61). The big chief, Broken Hand, Jeff’s dad, is Eduard Franz. I like Mr. Franz. Though born in Milwaukee, he always retained enough of an accent to play the foreigner or Indian (or maybe he put the accent on). He’d started as Two Moons in Broken Lance and was excellent as Red Cloud in The Indian Fighter. He went on to do a heap of Western TV shows. Iron Eyes Cody is also among the Indians, though uncredited.

Wise old Chief Eduard Franz
Why all these Hollywood white men as Indians? These days we don't do that. Post-Dances With Wolves, especially. Now we take care to have Native Americans playing Native Americans, even if they are rarely if ever members of the actual tribe portrayed. But before we criticize 50s (or present-day) Hollywood too much for this, we should perhaps remember that acting and plays were alien to the Indian tradition. There was no corps of Indian actors waiting in the wings. And, worse, the financers of movies were very unlikely to use unknown 'ethnic' actors in Hollywood films when bankable white actors with known names were available. You can hardly blame Daves.


As for the white parts, well, it’s always nice to see Noah Beery Jr. (just Noah Beery now). He is Lieutenant Ferguson, US Cavalry, and has a small but strong part as the canny and experienced soldier who is often seen quietly and knowingly observing the action. Emile Meyer from Shane is excellently malevolent as the drunken, Indian-hating brute of a store owner/barman. Meyer was another one who always brought color to a minor role. In this movie Meyer completes a trilogy of racist and corrupt storekeeper/sutlers (Will Geer in Arrow, Elisha Cook Jr. in Drum). I don't know what Daves had against storekeepers. Of course, many sutlers were actually corrupt, having purchased their franchises from crooked politicians in Washington and charging high prices to recoup their outlay. And Milburn Stone, Doc from Gunsmoke, is the unpleasant politician commissioner.


Only John Lund as the colonel was a bit bland. Though a popular Fox star, he was only in seven Westerns, where he was often a major or colonel. In White Feather it’s a biggish part and it really needed someone with a bit more weight or Western knowhow, I don’t know, Lloyd Bridges maybe or John Ireland.

Peace conference: left to right, Stone, Franz, Wagner, Lund, Beery
The opening words, spoken by Tanner/Wagner in voiceover, are “What you are about to see actually happened”, a sure sign that we are in for unhistorical melodrama, which is what we get. The voiceover echoes that of James Stewart's Jeffords in Broken Arrow.


The plot, rather curiously, was based on a story by John Prebble, born in Middlesex, England, died in London, the author of a successful book on the Battle of Culloden (where Butcher Cumberland defeated Bonnie Prince Charlie, as doubtless you know). Hardly the author one would expect for a story about the Laramie Treaty and the Indian wars. There we are. He also wrote the screenplay of Zulu. You learn a lot on this blog. It’s all useless knowledge but never mind.


You could say that this film is a kind of prequel to Cheyenne Autumn in the sense that it tells how the Cheyenne agreed to move south and John Ford takes up the story from there. 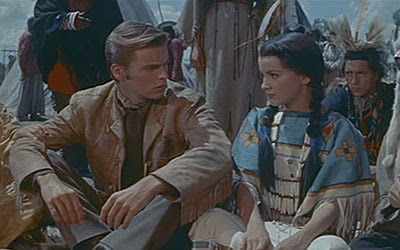 Bob 'n' Deb
Fort Laramie, far from being the tranquil, open place in a bend of the river, as it is now, is presented as an absolutely enormous adobe structure. Much of the budget must have gone on that. Or maybe it was already there in Durango, left over from a Beau Geste film.

A key scene happens when Broken Hand asks Tanner to talk to Little Dog and bring him round. This talk is set in the lodge of the medicine man and it reprises scenes in Broken Arrow and Drum Beat: in each case the decent white man tries to find words that will show the desirability of peace. Cochise responds with wisdom and reason. Captain Jack answers with hostility. In White Feather, Little Dog is conflicted. On the one hand he respects his father and wants to obey him; on the other, he just cannot meekly accept the annihilation of the Cheyenne way of life. That's where the movie is positioned too, somewhere between Broken Arrow and Drum Beat, and it can't quite make up its mind.

The ending is a bit over the top and finally, saccharine. Tanner tends Little Dog's body for a full three minutes before going off to marry his sister. He lovingly puts the comb he earlier gave Little Dog tenderly in his lifeless hand. These days you'd wonder if there wasn't something homoerotic going on. But of course no one was gay in the 1950s.

A final statement is cruelly ironic on one level: Tanner tells us that old Broken Hand lived to see his grandson enter West Point. So the boy will enter the ranks of those who oppressed his mother's people. Great. I suppose the idea was, though, that he would continue the warrior tradition.


What else have I got to tell you about White Feather? Not much. It’s a worthy effort, quite dignified, a little elegiac but it’s rather too slow and it lumbers across the plains. It's essential viewing, though, as part of the Daves canon. 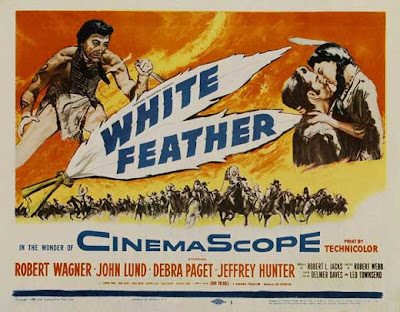