One of Widmark's best

After three Westerns in which Richard Widmark had strong though non-lead roles (Yellow Sky, Garden of Evil and Broken Lance), in 1956 he began to headline in such films, first with Backlash and then with The Last Wagon. While Backlash was distinctly underwhelming, The Last Wagon was rather good, and Widmark was at his best in it.

Lovely AZ in widescreen
The film had good credentials. It was directed by Delmer Daves, for one thing. Daves was, it is true, capable of weakish as well as strong Westerns, ranging from the seminal Broken Arrow with James Stewart in 1950, the absolutely outstanding 3:10 to Yuma (1957) with Glenn Ford and the excellent The Hanging Tree with Gary Cooper in '58 - all top notch - to the ho-hum Alan Ladd pictures Drum Beat (1954) and The Badlanders (1958). But he never made a really bad one. In The Last Wagon he elicited strong performances from the cast (of which more below), good pacing and tension, some thought-provoking and, for the time, quite daring content, and in particular (the most positive aspect of the movie) the great look of it. Shot by Wilfred M Cline in CinemaScope, its Sedona AZ locations glow with widescreen beauty. It’s really impressive, and tragic that most of us only see it on TV in mailbox slot format or on a modest DVD on a small screen. In fact all Daves Westerns were visually fine, even the dud ones like Drum Beat.


Then again the writing was strong. Based on a fairly standard plot by Gwen Bagni, who had done the undistinguished (not to say corny) Ronald Reagan Law and Order in ’53, the script was worked up by Daves himself and James Edward Grant. Grant, you probably know, was a close friend of John Wayne, a passionate lover of the bullfight and wrote (or contributed to the writing of) twenty Westerns. These comprised Wayne vehicles, some commercial successes but artistic lightweights like The Comancheros and McLintock! but also some excellently done Wayne movies like Angel and the Badman and Hondo. He’d also worked on The Sheepman, an outstandingly well-written Western. Together, he and Daves produced an interesting and really quite challenging script.


So with these encouraging signs, stirring Lionel Newman music, a decent Fox budget and a pretty good cast, the movie was set fair to be a good Western, and it was.


Western heroes have to be independent and brave and above all they must know the hard reality of the West. They must, briefly, have excellent survival skills in dangerous terrain. If they can be thrown in with tenderfeet, Easterners, youths, wagon trainers or others who would surely perish without such skills, so much the better. They are made to look even more heroic.


Think of Hondo or Hombre or Fort Dobbs or Shalako or any of the very many Western plots which rely on this. The danger usually comes from Indians (bandits in Hombre). You will immediately think of many more. In all of them, a tough, savvy hombre, wise in the ways of the West, gets naïve people out of danger with his courage and knowledge. The Last Wagon is a classic example of this.


The opening scene, a masterly eight-minute prologue without dialogue and at the start without music, establishes Comanche Todd (Widmark) as a tough survivor. It also sets the tone of his ruthlessness and toughness, and again in such films the hero often starts as unsympathetic, a badman, isolated, out on a limb, then gradually, as the story unfolds, softens as we understand why he is as he is, until he gets the girl and rides off into the sunset. On a fabulous Sedona riverbank (and how Daves loved rivers), Widmark shoots a man off his horse in cold blood.

Great opening scene
We see him in buckskins, with a rifle but no pistol, looking almost Hawkeye-ish, like the young Wayne in The Big Trail or Coop in Fighting Caravans. He is more than half Indian, and indeed we are later told that he has been brought up by the Comanche (cf Hondo, Hombre, etc.) He is captured by a brutal sheriff and they come up with a wagon train of Easterners crossing dangerous Apache territory.


Just as was the case with the rawhiders' wagon train in Daves's equally good Jubal, beautiful Felicia Farr (Mrs. Jack Lemmon, excellent also in 3:10) is on the wagon train, with her young brother Billy (Tommy Rettig from Lassie), and they take pity on the maltreated captive. Right away, of course, we can see the future nuclear family: Widmark will get them to safety, fall for Felicia, take a shine to the boy and they will ride off at the end together to start a new life together, probably on a ranch in California. This isn’t a spoiler, pards, because you know it’s coming. The original story is that predictable and you’ve seen Hondo, Shoot Out, Yuma, The Tin Star and a host of others where this happens. 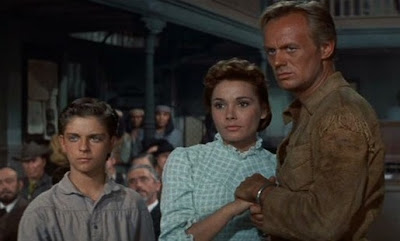 Nuclear family
Probably the most memorable scene is when they hoist Widmark, who is shackled, crucified, to a wagon wheel, up from the base of a gorge to safety – and redemption (symbolic, man).

The wheel of fortune turns
There are some other OK actors. George Mathews is horribly brutal as the sheriff. His part in the film is soon, er, axed. Puns aside, he is killed by a hatchet conveniently dropped near Widmark by a wagon trainer: it's an Indian weapon, thrown with Indian skill. In fact, if you think about it, Daves never had decent upright lawmen in his Westerns, when there were lawmen at all. They were always crooks or sadists. His heroes are never peace officers but always outsiders and men of the wild frontier.

Carl Benton Reid (Escape from Fort Bravo, Broken Lance, Wichita) has a juicy part at the end as the one-armed General O.O. ‘Bible’ Howard, who crops up now and then in Westerns, and who of course played a key role (this time impersonated by Basil Ruysdael) in Daves's Broken Arrow. In this film he presides over the trial for murder of Comanche Todd, bible at hand, and is bested. It's quite a pagan movie. The very Christian wagon-trainers are shown as weak and they are killed off. Their prayers to be protected through Indian territory are answered with a massacre; it's quite unusual for Hollywood to link a prayer with a negation. Comanche Todd tells how he abandoned his Christian faith when it failed him and so he adopted Indian ways.

James Drury appears as a cavalry lieutenant in his very first Western role, six years before The Virginian. B-Western vet Douglas Kennedy is the boss of the wagon train (until the Apaches attack). The great Timothy Carey has an uncredited bit part.


As for Widmark, he is very good. He kept his histrionics in check and, tough and hard but basically decent, managed here to be a convincing Western hero. He was often the bad guy or semi-bad guy (Yellow Sky, Garden of Evil, The Law and Jake Wade). When he was the good guy he was perhaps slightly unlucky with his parts – the clunky Wayne Alamo, for example, or the two late John Ford Westerns he did which were among Ford’s weakest (Two Rode Together, Cheyenne Autumn). He was also sometimes overshadowed by co-stars (Warlock, Alvarez Kelly, The Way West) and some of his choices of later Western roles were less than happy. But he was never bad in a Western and The Last Wagon must be accounted one of his best.

It was the era of rebellious teenager movies and audiences were getting used to understanding, shrewd authority figures taming unruly delinquents (think Blackboard Jungle the previous year, or, especially, Rebel Without a Cause, also in '55). And it is no accident that Nick Adams was a bolshy adolescent in both. In The Last Wagon Widmark, with his unconventional approach finally makes the children (because that is really what they are) respect and even love him. You have to be cruel to be kind, he seems to say, and I can be very kind.

The actual Indians (Apaches again this time, as in Broken Arrow) are not statesmanlike Cochise types but more the fearsome Hollywood Indians of yore but Daves gets his pro-Indian message across by making the hero Indian (Comanche) and making him, finally, against all the odds when you think of the opening, sympathetic, wise and in tune with nature.

Tough, violent, beautifully composed, with the cast on a journey, both physical and spiritual, this Western could almost have been made by Anthony Mann. Daves's and Mann's careers ran parallel in many ways. But more of that another day. 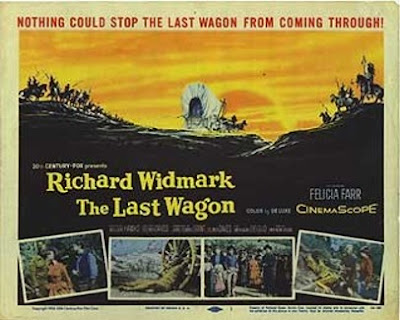