Jack Arnold (no relation to Jeff, sadly) was a director known for work of the caliber of It Came From Outer Space or The Incredible Shrinking Man and only did six Westerns. The IMDb bio says "Jack Arnold reigns supreme as one of the great directors of 1950s science-fiction features. His films are distinguished by moody black and white cinematography, solid acting, smart, thoughtful scripts, snappy pacing, a genuine heartfelt enthusiasm for the genre and plenty of eerie atmosphere." He brought some of those skills to this, his best Western. It was written by Gene Coon (4 Western movies, a lot of TV shows), a script full of terse one-liners. It turned out to be one of Audie Murphy's very best Westerns. It verges on a four-revolver rating.

Its great quality is tension. A famous hired killer, John Gant (Murphy) comes to Lordsburg, NM. Menacing and sinister, a gunslinging angel of death, Gant throws the population into panic. For whom has he come? They all have guilty consciences; they all have enemies.

They are suspicious. Who is the victim?
Audie does ‘sinister’ really well. He is quiet, cultured and polite but, you sense, he is ruthless too. It’s quite an interesting part because he simply has to do nothing, sitting quietly in the center of the town, and of the film, while hell breaks loose around him. Audie may have heeded Glenn Ford's advice when he said, "My idea of good acting is doing nothing well."

He sits. Drinks coffee. Waits.
Gant befriends the town doctor (Charles Drake), whom he always calls Physician (his name is Luke). As the town falls apart and the sheriff (Willis Bouchey) is powerless to stop it, the doc and his dad, the blacksmith (RG Armstrong, excellent as always) stand up for decency and normality. One by one, the townsmen crack: the banker (Whit Bissell), the saloon owner (Simon Scott), the freighter (Karl Swenson), the judge (Edgar Stehli).

Chess with Doc. They discuss the morality of killing.
In 1959 McCarthy and paranoia were fresh in people’s minds and No Name is quite a thoughtful study in crowd hysteria.


It’s a ‘town’ Western, with few location shots (so budget saving), though CinemaScope was used. The nicely photographed opening widescreen arrival of the gunman raises expectations. These town Westerns can be really good, though, if well-constructed, like this one. The small, claustrophobic town can heighten the tension. High Noon is the classic example, of course. This is no High Noon, it's not that good but still... 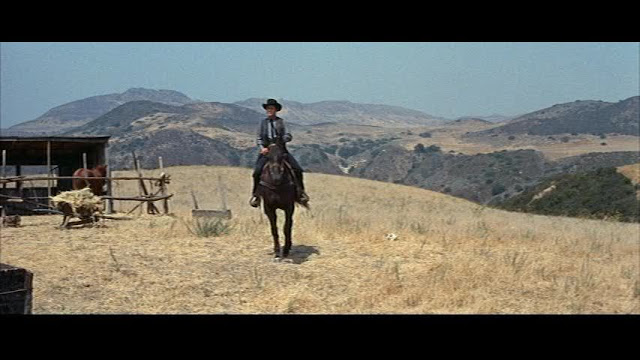 Widescreen vista doesn't last
I won’t tell you the ending, although I will say I saw it coming somewhat and so will you.


Audie’s last words are, “Everything comes to a finish.” Yup. 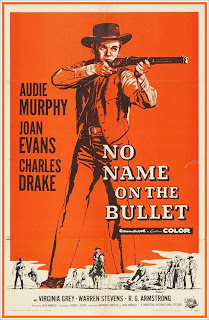 No Name on the Bullet is definitely near the top of the list of Audie Murphy Westerns. It even rivals some of those psychological Randolph Scott/Budd Boetticher Westerns of the same period. Recommended.
﻿
Posted by Jeff Arnold's West at 8:29 AM