This film is curious in that the director, ‘Allen Smithee’, didn’t exist. The first director was Robert Totten, with whom lead Richard Widmark argued so much and whose pace was so slow that Don Siegel was hired to replace him and Siegel finished shooting in nine days afterwards. Totten was chiefly a director of TV shows and it is evident. He only helmed two other feature Westerns, both 1970s, both weak.


It’s a mediocre picture anyway, whoever directed it. 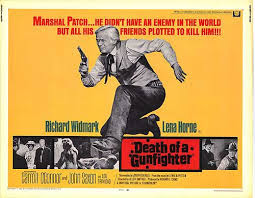 As for the acting, it’s hard for any star to play a tired, washed-up marshal without coming across as a tired and washed-up star. That’s how Widmark appears. Roger Ebert wrote that “This is one of Richard Widmark's best, most fully realized performances” but I must say I can’t see that myself. He seems to be going through the motions (though with the occasional spark). He and writer Joseph Calvelli (from a Lewis B Patten novel) semed to be going for a High Noon vibe, with the loner marshal the only one with guts enough to stand up and fight. But it's about as far away from High Noon as you could get. The picture is very much the Richard Widmark Show but either he wasn't in the mood or the writing or the directing weren't up to scratch. Whatever, it's definiely not one of Widmark's best (he was capable of great things).

Lena Horne does a good job as his lover, the saloon owner, but the script  doesn’t give her a chance. There are a couple of stalwarts, Royal Dano and Harry Carey Jr. (Harry as a priest), but they can’t save it either. I quite liked John Saxon as the Italian county sheriff. 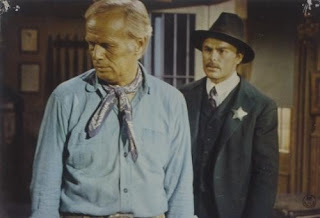 The plot is fairly preposterous as Widmark leaves corpses all over town. There is some attempt to show ‘progress’, with electric light and a horseless carriage (which always symbolizes the coming new century and the end of the West – see The Ballad of Cable Hogue, The Shootist, Ride the High Country and many more), and that old-style gunfighter law officers are no longer needed. The town council repeat this endlessly but they are so murderous and finally shoot him to death (given the title, this can’t be accounted a spoiler) so their credibility suffers. It is hinted that they kill him because he knows secrets about their past but apart from one of them having shot a man in the back, nothing is suggested as to what this past might have entailed. 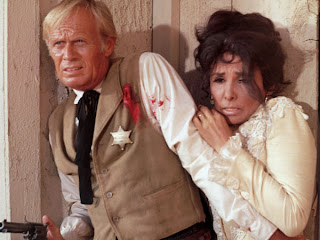 Nor is it explained why on earth a marshal would want to hang on to a job at all costs when he was universally hated and despised and the whole town is bent on shooting him down like a dog.


There is a faint echo of town-taming movies like Warlock or Man with the Gun as the pusillanimous townsfolk hired a tough marshal to establish law ‘n’ order but then want him out when his methods prove unsavory and deter investors.


The music and photography are ordinary.


It’s a million times better than many of the spaghettis coming out at that time but as an American Western it’s ho-hum. 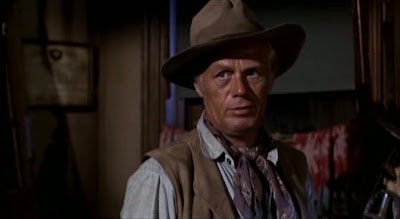