Did Sam Bass (1851 – 1878) ever know Calamity Jane (1852 – 1903)? Probably not, although they were both in Deadwood at one point, so they could have met. Did he and she have a torrid love affair – almost certainly not. Still, never mind, Hollywood must be allowed its latitude and since when was it a Western’s job to recount factual history? 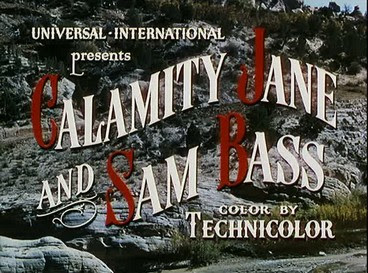 This colorful farrago tells how Bass was forced into becoming a decent bandit (only taking the amount of money honest folk had been cheated out of from the stage strongbox and leaving the rest). It was not his fault. Corrupt townsmen and vicious horse-poisoners absolutely obliged him to hold up trains, stages and banks.


In the 1940s you couldn’t really have out-and-out robbers as heroes. They had to be justified. Usually it was the railroads' fault.


And they ideally had to have two girlfriends, who both love him but he manages to opt for the really true one in the last reel. In this case they are played by Yvonne De Carlo (Calamity) and lovely Dorothy Hart from Gunfighters (Kathy). De Carlo plays her part manfully and was quite glamorous (we never had an ugly Calamity, not till the HBO series Deadwood came along) but la Hart is really rather beautiful.


The interpretation of Calamity Jane is more restrained that it usually was. De Carlo plays it straighter than Jean Parker or Doris Day. De Carlo wasn’t much of an actress, I think, and didn’t suit Westerns (see, for example, Frontier Gal, or indeed any other of the B-Western stuff she was in) but this and maybe Tomahawk are two of her better performances. 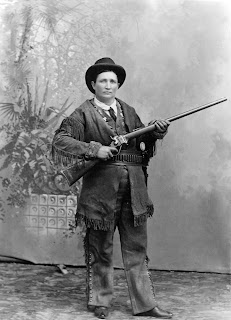 Calamity Jane in fact and fiction 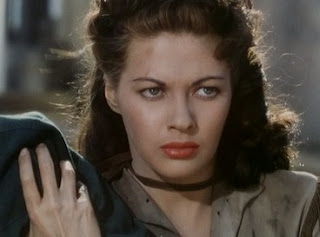 The original title was The Story of Sam Bass and indeed Calamity only appears for about half the movie but I guess De Carlo had more Hollywood pulling power than Howard Duff, who was really a radio, then TV actor (he’d only been in one other Western, Red Canyon, another George Sherman effort, earlier the same year), so the actual title headlined her. And indeed, Howard Duff was mediocre as the hero, although his lack of charisma did, I suppose, at least make him seem more of an ordinary guy overtaken by events. He wears a rather girly shirt for the first reel but happily soon abandons it for more macho wear when he becomes an outlaw. 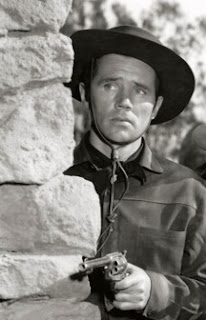 Sam Bass in fiction and fact 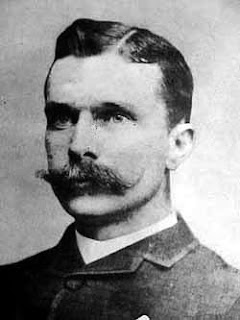 Young Lloyd Bridges, pre-Little Big Horn and High Noon but already in his eighteenth Western, so quite an old hand, is Sam’s pard. He gets tempted into wickedness and lives by the sword, or the pistol anyway. So you can guess what fate awaits him. 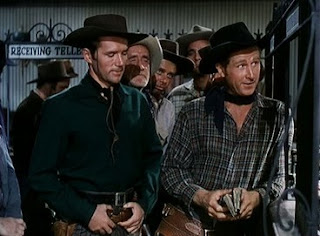 Lloyd on the downward slope
Willard Parker is good as the sheriff. Milburn Stone (Doc from Gunsmoke) is in it and I spotted a few recognizable faces among the uncredited bit-parts/extras such as Harry Harvey and Russ Conway.


The movie was filmed in Utah and there are some nice location shots photographed by Irving Glassberg. They drive cattle from Texas to Abilene in the story and Kansas does look a trifle on the mountainous side. I mean have you ever been to Kansas?


There’s quite a lot of horse racing. In fact that’s what gets Sam into trouble in the first place and there’s a moralistic tone to the movie: gamble and you will fall into sin.


The writing (Maurice Geraghty and Melvin Levy, aided by the director George Sherman) is quite restrained and economical, though there are weaknesses: when Calamity breaks Sam out of jail she tells him to “Head for the hills. I’ll find you there.” Sigh. 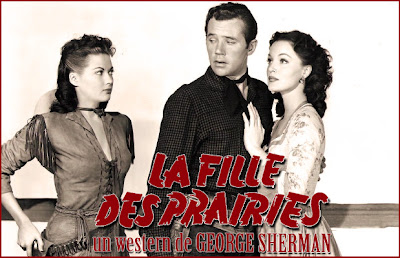 Kathy knows she's got him. So does Calamity.
Sam Bass appeared in Westerns, though not perhaps as much as other outlaws did. He was the central character in the silent The First Degree in 1923, played by Frank Mayo, and in the Henry Hathaway/Randolph Scott Zane Grey talkie Wild Horse Mesa in 1932, he was played by Charley Grapewin. He featured in Badman’s Territory (RKO, 1946), played by Nestor Paiva, but then pretty well every Western outlaw under the sun was in that one. Jim Davis had a small part as Bass in Republic's The Fabulous Texan in 1947 and William Bishop was Sam in the 1951 version of Columbia's The Texas Rangers. He appeared in various Western TV shows including, obviously, Stories of the Century where this time Jim Davis wasn't Bass (Don Haggerty was) but instead the railroad detective who tracks hims down.


It is a Universal 1940s A-Western; we have to give it that. But in a year where I can think of at least a dozen excellent oaters (She Wore a Yellow Ribbon, Colorado Territory, The Walking Hills, Streets of Laredo, etc.) this one doesn’t even come near. 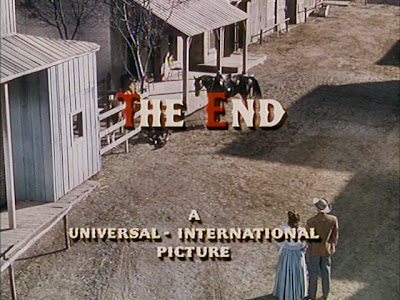