Robert Mitchum plays a hard-drinking, womanizing, cynical outsider. How hard did he have to act? 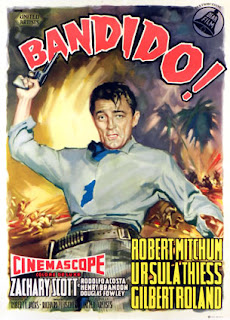 This poster still had the wretched ! but it got dropped along the way
We learn that in 1956, scriptwriter Earl Felton, a drinking buddy of Robert Mitchum’s, said that he wanted to write a picture for Mitch about a soldier of fortune. Mitchum always saw himself as some kind of adventurer. Felton came up with a project about an American movie company in Mexico in 1916 and a gringo who was Pancho Villa’s right hand man. Mitchum loved it and they got United Artists interested. Felton’s friend Richard Fleischer agreed to direct. Fleischer had done no Westerns, but he was good at action films and had also worked on another Mitchum movie, His Kind of Woman, in 1951.


When the script was done, however, there was no Villa and no movie company. It was just an incoherent plot about a gringo arms dealer ducking bullets from nameless revolutionaries. Fleischer wanted out but Universal threatened legal action if he did and so he and Mitchum went down to Mexico with Felton, who was told to bring his typewriter. They’d make it up as they went along. The night before in a bar, usually.


They had a title, Bandido! (sadly, the stupid exclamation point was retained in some manifestations although luckily it got dropped along the way in most places) and now had a couple of well-known (to US audiences) Mexicans as revolutionaries, Gilbert Roland as “Escobar” and Rodolfo Acosta as his henchman Sebastian.


Many of the locations were places where the battles of the revolution had actually taken place and some of the more elderly extras were even former revolutionaries. Sadly, all this historical potential was wasted in a bland treatment of the revolution with no mention of any real participants and just a slightly Villa-esque rebel leader, Roland (rather good, actually), fighting uniformed federal troops under a ‘General Lorenzo’ (Victor Junco). 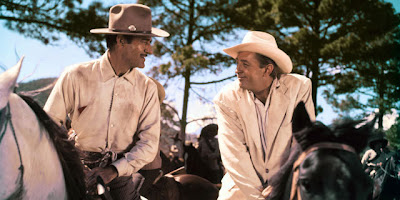 Gilbert Roland is good as revolutionary leader 'Escobar'
Probably the worst part of the script is the fact that key characters suddenly and implausibly turn up just where and when they are needed, without explanation.


Still, it’s a fun, noisy actioner done with gusto. Its limited length (91 minutes) helps keep the rhythm pacy and tight: a lot is packed in!


Mitchum was not quite so much on autopilot this time. He was, naturally, insouciant and nonchalant (those words were actually invented to describe him; not a lot of people know that) but there was a certain electricity to him too. He was clearly enjoying it.


Right at the start of the movie, there he is in a white suit, a glass of whisky on the balustrade, lobbing hand-grenades (nonchalantly and with insouciance, obviously) from a hotel balcony down on the troops of the side he didn’t care for (the federals) even though it was the federals that would have paid him more for the arms he could get. Of course, Mitchum would be excellent: he was playing a hard-drinking, womanizing, cynical outsider.


It’s a complex plot about an arms dealer, Kennedy (Zachary Scott, who’d been in five B-Westerns, including Colt .45) and his wife Lisa (Ursula Thiess, who had just become Mrs. Robert Taylor) crossing over into a war-torn Mexico in 1916.

It makes it sound as though the revolution started in 1916...
Another gringo, Wilson (Mitchum) finds out his plans and gets in with the revolutionaries so that they may capture Kennedy and get the arms that they so desperately lack. Of course Wilson is attracted to Mrs. Kennedy.


Ursula Thiess was only in two Westerns and they were only semi-Westerns at that, Bandido and The Americano, both twentieth-century tales about a gringo south of the border. She had a rather charming slight German accent (she was born Ursula Schmidt in Hamburg). She was billed as "The Most Beautiful Girl in the World" and while that may have been a slight exaggeration, she certainly was very attractive. Mitch gets to kiss her in a passionate Lancaster/Kerr-style embrace on a Mexican beach. 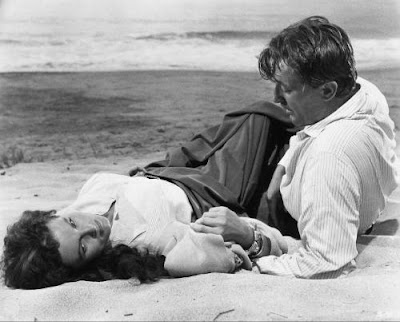 Doing their Deborah and Burt imitation
In all such films, there has to be a ruthless German military consultant to the incompetent Mexican general. It was Eric Braeden in 100 Rifles, for example, and Fernando Wagner in The Wild Bunch. This time it’s Henry Brandon (the Indian chief Scar from The Searchers earlier the same year) as Gunther. Brandon was a Berliner. There’s a scene where he escorts Ursula to the general, a Berliner and a Hamburger together. Sounds rather a culinary duo, doesn’t it.


Mitchum did most of his own stunt work. He drew the line, however, at riding over rocky terrain in a Model T taxi, which had to carry a double as passenger. The director segues nicely from the Ford backfiring to the gunfire of the front.


Watched by a serenely smiling Earl Felton, Mitchum emerged from the slimy swamp scene cursing, “What kind of fucking sadist would write a chase scene in a dirty goddam swamp?” Felton replied, “Don’t you remember? This was one of your swell ideas.” That shut Mitchum up.


The Max Steiner score avoids the faux-Mexican and is a straight, if rather martial and brassy affair, suited to the action. At one point there’s a pleasant ballad, Bandido, sung by a revolutionary, sadly curtailed by gunfire.


It all climaxes with a great battle on the beach, with Mitchum and Roland shooting at explosives with a Browning machine gun.

I hope Gil had earplugs in
12 years later Mitch was back in Mexico in Villa Rides! in which he finally did get to be a gringo gun runner with Villa but that had an exclamation point in the title so obviously wasn’t half as good. It had a ridiculous Yul Brynner in a toupee as Pancho Villa. It was a great might-have-been, in fact, because Sam Peckinpah was to have written and directed it but that never happened. Sam reserved his gringos in Mexico ideas for a certain 1969 picture…