By the mid-1950s John Sturges had already directed some interesting Westerns or near-Westerns such as The Walking Hills (1949) and two very fine pictures, Escape From Fort Bravo (1953) and Bad Day at Black Rock (1955). In 1956 he got Richard Widmark and John McIntire cast in Universal’s Backlash, and we could therefore have hoped for an excellent film. 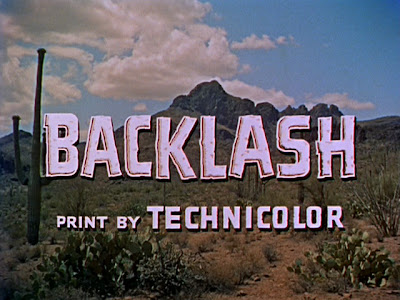 Nice AZ scenery in color anyway
Instead, this is a disappointment. It has all the air of a B-movie. From the opening lurid titles over a saguaro-studded Arizona set, this 84-minute story about rather disagreeable people could almost have been a second feature.


Widmark is good. He looked tough and that craggy face was right for the hard loner, although he was sometimes prone to histrionics, I think, and also can come across as, well, sour. Overall, he was probably better suited to bad-guy roles. This was the first Western he had led in, previously having played second or even third fiddle in Yellow Sky, Garden of Evil and Broken Lance. He had abandoned Fox for the moment to go freelance. 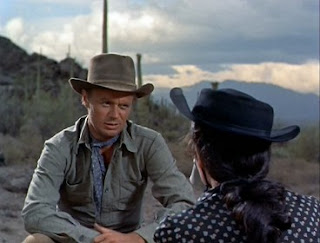 Widmark: sour
McIntire was superb, always, and could be relied on for a good performance; here, as the main badman, he does a good job. He did the ‘villain with panache’ role very well and here reminds us of his roguish Gannon in The Far Country two years before. 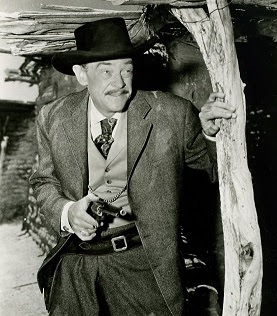 Roguish John McIntire always elevated a Western
But the rest of the acting isn’t too hot. Harry Morgan, fine in comic or semi-comic roles, was seriously miscast as a heavy, and although he has stalwart badman Robert J Wilke as his brother, Wilke is too soon dispatched by Widmark in a saloon gunfight. 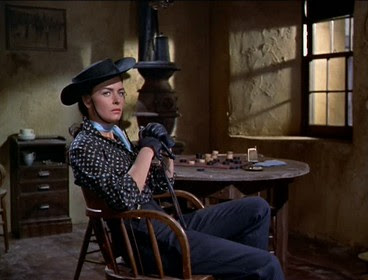 Reed: beautiful but unsuited
Donna Reed, though beautiful, is ho-hum as the female lead. This was the last of her eight Westerns and I'm not sure she was entirely suited to them. She had been OK, I guess, in some (Hangman's Knot, Gun Fury, Three Hours to Kill) but had been very unconvincing as Sacajawea in The Far Horizons.

Good old Barton MacLane is a sergeant, one of the better players. William Campbell just sneers and looks ridiculous as the absurdly-named gunslinger Johnny Cool. 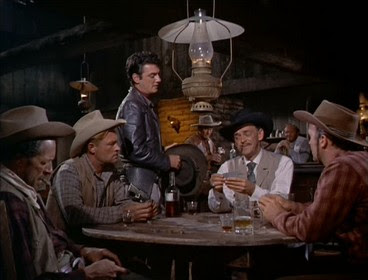 Miscast minor roles
The problem really is with the screenplay (Borden Chase from a Frank Gruber novel). The dialogue is stiff. The plot is convoluted and too many minor characters are introduced, then leave, for no apparent reason. There's an attempt at sub-Freudian symbolism and there's an improbable plot twist involving key characters (though my lips are sealed on this, dudes).


At the heart of it there’s a fairly basic revenge/hidden gold plot: Widmark is seeking the traitor who was responsible for the death of his father, who buried some gold. There is some Sturges action as the ’good guys’ fight off Apaches.


It’s not bad visually, with Irving Glassberg photography of locations around Old Tucson, and the Herman Stein music is rather good, all intensity and drama. Universal Westerns of this period had high production values.


All in all, though, it’s a run-of-the-mill oater that fails to spark, and with a Rosenberg/Sturges/Chase/Widmark/McIntire line-up as producer/director/writer/star/villain, we had a right, I think, to expect better. Widmark did better later the same year with his The Last Wagon. Sturges made up for Backlash the following year with the excellent and hugely popular Gunfight at the OK Corral and went on to direct some very good Westerns indeed, notably, of course, The Magnificent Seven in 1960. But we have to put Backlash down as one of his weaker efforts. 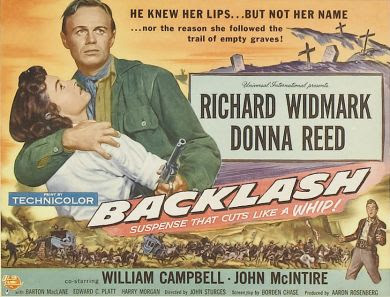 He knew her lips, you see