Many of them were only made for a fistful of dollars

But Leone loved the Western

Since 2010 when this blog started I have often referred to spaghetti westerns but because I am not a fan I have not yet got round to reviewing many. I thought I ought to put that right so as a start, over the next three days I’ll review the Dollars trilogy.


These films have their fans and defenders, and this very likely won’t make enjoyable reading for them. I advise them to stop here…


But true Western fans will, I hope, read and enjoy. 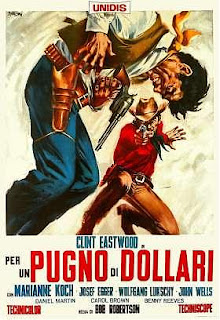 Suitable 50s trash-art poster, rather good
Probably the most famous ‘spaghetti westerns’ are the ‘Dollars’ Trilogy, of which Per un pugno di dollari is the first. On the screen, the title says Fistful of Dollars but it has usually been referred to as A Fistful… or For a Fistful… Whatever.
There is a huge amount to say about the genre and no space to do it here but the most famous book on the subject is the dense film-crit tome Spaghetti Westerns: Cowboys and Europeans from Karl May to Sergio Leone by Christopher Frayling. As a true Western fan, I do not watch spaghettis much. As Frayling himself says, in some ways they are not Westerns at all, they are about Westerns. Another way of looking at it is Alberto Moravia’s view that while Hollywood Westerns are based on myth, spaghetti westerns are a myth of the myth.

He's actually called Joe
Anyway, this one is a typical example, in fact an archetype. The story was a very well-worked one. Dashiell Hammett had done it in Red Harvest, Kurosawa did it in Yojimbo and it was later to come full circle and be reworked as a gangster movie (but a Western really) by Walter Hill in Last Man Standing. Leone even argued that it was based on Goldoni’s A Servant of Two Masters. No fewer than seven people, including Leone, worked on the writing - nine if you count the two Japanese credited with the Yojimbo screenplay.


In most countries it was rated as suitable only for adults when it came out because of the brutality, and the beatings and murders are still quite shocking today. The violence is stylized and in the showdowns the celebrants perform a ritual.


The credit titles at the start are James Bondish (Bond films and their Italian rip-off copies were hugely popular in Italy) and the idea was to produce Westerns (then declining seriously in the US) which would appeal to 007 (or Italian 006) audiences.


Like all spaghetti westerns, this one has the dialogue and sound dubbed-in afterwards (I have always disliked dubbed films and in these everything is dubbed) and all the sounds are overdone. Leone especially liked this.

Horses' hooves and men's boots were another obsession
It was made on a very low budget (Clint was only in it because he was the cheapest Yankee star available, at $15,000 all in; it was first offered to James Coburn, who was too expensive, then Charles Bronson turned it down as the “worst script I have ever seen”).
It has the European gray/olive color of its Spanish settings rather than the yellow/pink New Mexico deserts or rich Arizona reds or high Colorado greens we had come to expect.


Characters and sets are dirty and beat-up, which is quite good. There are the famous very close close-ups of faces and, for some odd reason, men’s boots and horses’ hooves (they had to have that).

Effective use of widescreen to emphasize the lone-ness
Ennio Morricone’s ‘music’ is unpleasantly jangly. Leone wanted a Rio Bravo-type deguello on the trumpet and Morricone came up with some trumpet stuff. The soundtracks of these films were also cheaply done and tended to avoid orchestral arrangements of original scores because of the cost. Many people think that Morricone is a genius. They are, however, wrong.


The only really good bit is when Joe invites the bad guys (or should I say worse guys) to apologize to his mule. 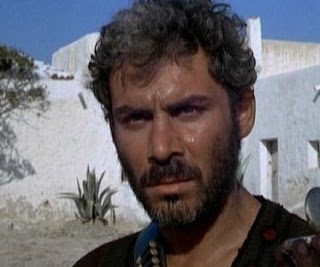 'John Wells'
The ‘hero’ is morally neutral, just an impartial observer, in it for what he could get. He even watches a child being mistreated without intervening in the first reel, unthinkable in an American Western. At one point, a character says, when looking down on a scene just before a massacre, “It’s just like playing cowboys and Indians.”
It’s alright if you like comics but it is actually quite curious how these movies became all the rage, especially in Italy but then all over the world, even in America. Audiences seemed to revel in their very trashiness. Perhaps they smiled with knowing, ironic amusement at the evident cheap rip-off nature of these commercially churned out pictures. Or perhaps they really thought they were good. Or art.


It is said that spaghetti westerns brought new audiences to the six-gun movie - younger people and those who had grown tired of the old, 1950s black & white B-Westerns they remembered, and wanted to move on in the 1960s. These films were anyway new, brash, noisy and in color. In any case, at the very least we had movie theaters full of audiences watching Westerns again, no mean feat.


And in a process of reverse-engineering, some aspects of the spaghetti fed back into mainstream American Westerns in an interesting way.


A Fistful of Dollars was followed the year after by a sequel, For A Few Dollars More, which we’ll look at tomorrow.