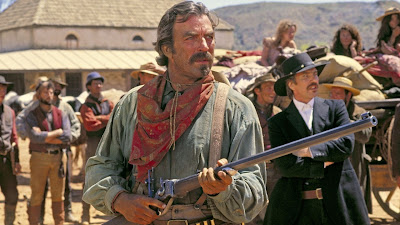 Quigley at 1000 yards
The Sharps is the long-range rifle of the Western. Think of Bob Valdez, high on the mountain, picking off Frank Tanner’s men at 1200 yards in Valdez is Coming, or Quigley and the bucket as target in Quigley Down Under. In Western after Western, the Sharps makes an appearance. It’s almost a character actor. 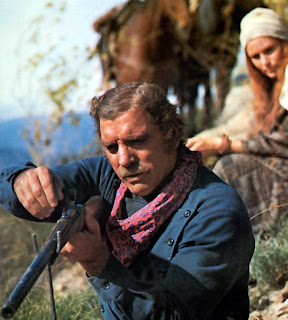 Take care, Tanner
The first Sharps rifle, designed by Christian Sharps (1810 – 1874), who had been an apprentice at the Harpers Ferry Arsenal, was patented in 1848 and manufactured in Mill Creek, Penn. In 1851, a factory was set up in Hartford, Conn. and through the 1850s the rifle gained a great reputation for accuracy and reliability. Christian Sharps left the company in 1853 and chief armorer Richard S. Lawrence developed the various Sharps models and their improvements that made the rifle famous: around forty different models of the Sharps rifle were manufactured through the 1850s, 60s and 70s. The company closed in 1881.


The breech-loading single-shot Sharps became widely used in the American Civil War. The carbine version was very popular with the cavalry on both sides and was much more common than the full-length rifle.


The action of the Sharps made it suitable to conversion to the new metallic cartridges developed in the late 1860s, and many of these converted carbines, firing a black powder ‘Government’ cartridge, were used during the Indian Wars in the decades following the Civil War.


Because, unlike the Henry and Spencer rifles, the Sharps could effectively pierce the tough hide of a buffalo and stop the 2000-pound animals in their tracks at hundreds of yards, it became the weapon of choice for the slaughter of the these beasts by the buffalo hunters in the 1870s, especially the ‘Big Fifty’ variant (.50 caliber and 90 powder weight). Such was the power and accuracy of these long guns that they are still used today by target-shooting marksmen (or Sharpsshooters...) and modern versions are still being made. In Forsyth, MT there is an annual ‘Quigley Match’ with a 44-inch target placed at a thousand yards, as in the film!

Big Fifty 50/90
Sharps-spotting can be an enjoyable pastime while watching Westerns. LaBoeuf (Matt Damon) in the 2010 True Grit uses an 1874 cavalry carbine and he and Rooster Cogburn (Jeff Bridges) debate its qualities (in the end, lucky for Rooster that LaBoeuf was right). 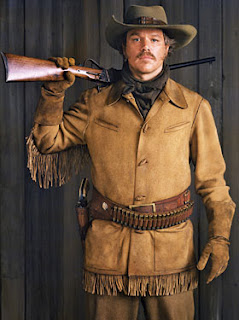 LaBoeuf had one. Luckily. 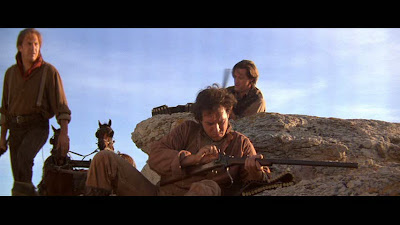 You can spot Bat Masterson (Tom Sizemore) with one in Wyatt Earp (1994) and of course Bat really was a master shot with a Sharps (with his buffalo hunting and Adobe Walls experience). In 1989 one of Blue Duck’s thugs in Lonesome Dove has one with a telescopic sight: now that’s overkill.

Doubtless you, dear reader, will know of other instances of the Sharps in film. Let us know by posting a comment!

You wouldn't want to be on the receiving end...
The light and rapid Winchester repeater remains the rifle of the Western movie, no doubt about that: there’s hardly a Western without one. But if you want long-range accuracy and huge power, there’s only one option, pardners. Get your forked stick out as a rest and limber up that single-shot Sharps.