Kit Carson in fact and fiction 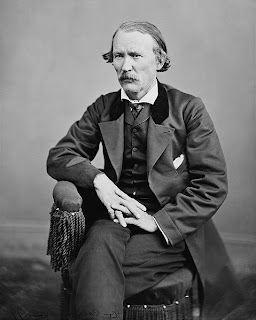 Christopher Houston Carson
Of all the Hollywood treatments of famous figures of the West – Wyatt Earp, Billy the Kid, Jesse James, whoever – the film and TV versions of the life of Kit Carson were the farthest from the historical truth.


Christopher Houston Carson (1809 – 1868) was a fascinating character and had such a remarkable life that one wonders why it should be necessary to invent absurdities in it. The real story would be more than dramatic enough. 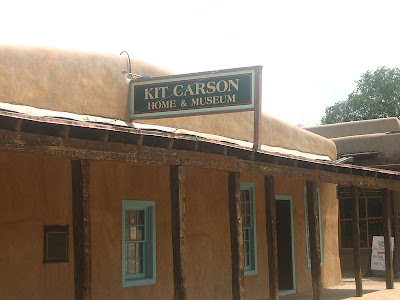 An excellent museum
In August  2005  I visited his home in Taos, NM which is now an excellent little museum, which I much recommend (www.kitcarsonhome.com) and there I bought a first class book, Dear Old Kit: the Historical Christopher Carson by Harvey Lewis Carter (University of Oklahoma Press, 1968). This account of Carson's life gives us the true Kit Carson and Chapter 1, The Carson of History and Legend, and Chapter 4, Carson the Man: a New Appraisal, are particularly illuminating. Chapter 2, the heart of the book, is a newly edited and annotated edition of Carson's memoirs, dictated in 1857.

The memoirs are quite extraordinary for the way he tells of events so startling to us today in a matter-of-fact, laconic way that sometimes make the blood go cold. The thousands of miles of unexplored and highly dangerous terrain he traveled, the lethal conflicts with Indians, the marvels and wonders are all announced deadpan as if they were everyday occurrences. Part of this was perhaps his natural modesty: he was no sparkling teller of tall tales like Jim Bridger and he was, all his life, a quiet, unassuming man, despite his achievements. Statements like, "Concluded to attack the Indians. Done so." were typical of the man. 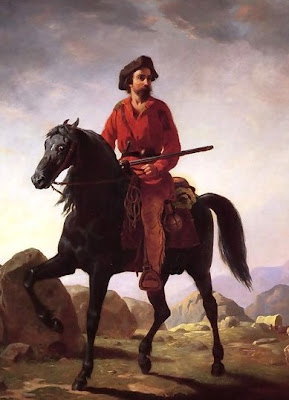 
Christopher Carson was born in Kentucky, the eleventh child of 15, and raised in Missouri. His father was killed in an accident when Kit was 8 and the boy was forced to leave school to work on the farm and hunt. He was apprenticed as a saddlemaker in Franklin, at the eastern end of the Santa Fe Trail, and was exposed to stirring stories of the far West. But years of grind to learn saddlery were not for him. "The business did not suit me and I concluded to leave," said Kit. At 16 he signed on with a caravan leaving for Santa Fe, tending the mules and horses. He stayed in Taos with Matthew Kinkead, explorer and trapper, and was a much keener and quicker apprentice than he had been in Franklin. He also quickly became fluent in the many Indian languages as well as Spanish.

In 1829 he signed on with a group of forty men led by Ewing Young, who was something of a mentor to Kit, to trap and trade all over Apache country and into California. All through the 1830s he trapped and traveled, attending the mountain man rendezvous and marrying an Indian wife, Singing Grass, who, however, died somewhere between 1838 and '40. Carson considered his years as a trapper to be "the happiest days of my life."

As a real expert, Carson was hired by John C Frémont (after a chance encounter on a Missouri steamer) as a guide, 1842 – 46, leading the 'Pathfinder' through much of California, Oregon and the Great Basin area. Carson was illiterate himself (could just sign his name) and it was through Frémont’s accounts of his travels - 'polished', not to say actually written by Mrs. Frémont and much promoted by her in Washington - that Kit became famous, and the subject, then, of lurid dime novels. The Carson of these novels was the one that Hollywood adopted, rather than the actual historical figure. 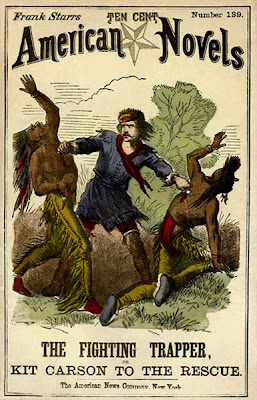 Dime novels
He served in California in the Mexican War in the late 1840s, and is famous for his journey across the Continent to Washington DC to deliver news of the war to the government.

In the 1850s he was Indian Agent in Taos and all through the decade he trapped, guided, fought Indians and hunted. He also dictated his memoirs.

He led a force of New Mexico volunteers on the side of the Union in the Civil War and participated at the Battle of Valverde in 1862. He was brevetted Brigadier-General. He was one of the most celebrated names in America.

The campaign against the Navajo was particularly brutal. The forced transfer of many Navajos to Bosque Redondo, insisted on by General Carleton, involved a terrible march which resulted in the death of hundreds, both during the trip and afterwards on the reservation: in the spring of 1864, 8,000 Navajo men, women and children were forced to move 300 miles from Fort Canby to Fort Sumner, New Mexico to be resettled there and become farmers. The experiment was a disaster and was abandoned in 1868 but Carson (although he had opposed the displacement) earned the undying enmity of many (but not all) of the Navajo.

At Adobe Walls in November 1864 with 334 men, he engaged a greatly superior force of (mostly) Kiowas, but with skill and control withdrew, losing only 2 soldiers and one Ute scout. It was in a way what Custer should have done twelve years later but Carson had none of Custer's rash bravado.

Carson was appointed to various positions, such as commandant of Fort Garland, but his health declined and in the summer of 1867 he resigned his commission. He died in 1868.


Not only the capital of Nevada, Carson City, is named after Kit. There’s a Carson pass, forest, trail, valley, river, mountain, army post, several towns and any number of schools and streets. Buffalo Bill named his only son Kit Carson Cody.


This is only the bare bones of Carson’s life. Do read Mr. Carter's book for more. You'll enjoy it.


Immediately, in the first days of film Westerns, silent movies came out featuring Kit Carson. There were four silents between 1903 (the first effective year of the Western movie) and 1928. Fred Thomson, in his last Western, was Kit in the 1928 one. 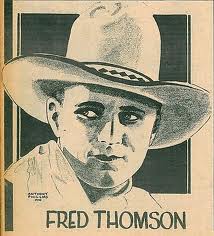 Fred was Kit in his last Western
From 1933 to 1947, Hollywood produced four Carson talkies: Fighting with Kit Carson, a 1933 serial with Johnny Mack Brown as Kit, brought out as a single movie, The Return of Kit Carson in 1947 (both Noah Beerys were in it); 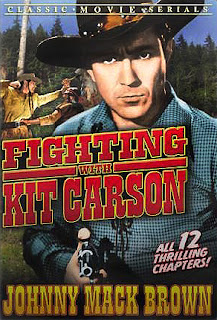 Johnny was Kit in the 1930s
Sammy McKim appeared as Kit in The Painted Stallion in 1938; Wild Bill Elliott was Kit in Overland with Kit Carson (1939); and Kit Carson (1940), starred Jon Hall as Kit and Dana Andrews as Frémont (reviewed below).

Kit appeared in a mini-part in a 1942 B-Western Lawless Plainsmen, played by an (uncredited) Forrest Taylor.


Bill Williams was Kit in The Adventures of Kit Carson, 103 episodes, 1951-1955, which made Kit into a kind of Lone Ranger figure, roaming the West in his buckskins with the obligatory sidekick and righting wrongs with his 1880s six-shooters. My sister liked it.

Kit appeared in various Death Valley Days episodes, as might be imagined. Morgan Jones played him in Head of the House in 1958, and David McLean in Stubborn Mule Hill in 1963. Philip Pine was Kit in Samaritans, Mountain Style in 1966 and Kit was played twice by James Macarthur (1967 and 1968).

Disney released a two-part TV movie Kit Carson and the Mountain Men in 1977 with Christopher Connelly as Kit and Robert Reed as Frémont. This was nearer the real Kit than the Adventures series anyway.


But none of these screen Kits even came close to the original. It’s a pity because the real life of Carson would make a fascinating, and thrilling film.

In 1986, Dream West was a CBS mini-series biopic of Frémont (Richard Chamberlain) that includes Kit Carson, played by Rip Torn. Torn manages to look quite like the portraits of Kit although doesn't quite have the modesty or deference to Frémont that Kit certainly had. It's not a bad TV movie, though, in many ways and at least gives us a non-sensational and plausible Kit.


The History Channel produced Carson and Cody, the Hunter Heroes in 2003. In 2008 PBS/The American Experience produced Kit Carson, a film biography. At last we were seeing something of the true Kit Carson. 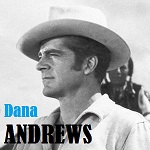 The other day I watched the 1940 Kit Carson again. Jon Hall was a handsome sort of fellow but not much of an actor. Luckily, the George Bruce script he had to work with was so clunky that no one really noticed. The whole film comes across as dated and melodramatic, like an early 1930s talkie.
The early part is certainly the best, as we are introduced to the three compadres Kit (Hall), Ape (Ward Bond) and Lopez (Harold Huber) as they fight Shoshone who, horrors, actually have guns. It turns out that the wicked Californian Mexican Governor Castro (played as a total pantomime villain by C Henry Gordon) has been arming the Indians with Spanish muskets. 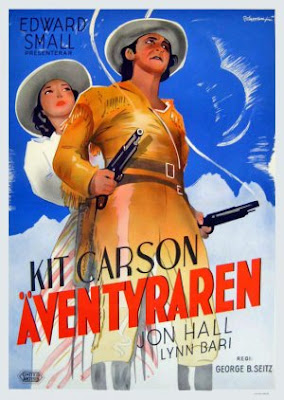 Arriving in camp, the three encounter their old pal Jim Bridger (Raymond Hatton, in a short but highly colorful cameo) as well as a rather straitlaced, by-the-book Captain Fremont (Dana Andrews), who engages the three as scouts to lead  a wagon train to California. There’s a glamorous lady on the wagon train, obviously, Dolores Murphy (Lynn Bari). 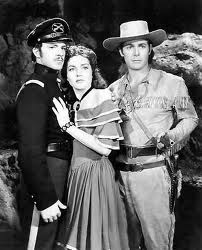 Dana, Lynn, Jon: Fremont, Dolores, Kit
They fight their way over the Sierra, Kit’s savvy advice winning out over Fremont’s military manual, and arrive in California, where another story begins as they set up the California Republic and foil Castro’s dastardly plan to murder all the Americans in California and burn their haciendas.


Meanwhile, Kit and Fremont vie for the hand of the lovely Dolores…


Well, it’s a farrago of nonsense, of course, and any resemblance to the truth is purely coincidental. Still, it’s a lot of fun and Andrews’s upright Fremont and, in particular, Bond’s wild Ape, a part ideally suited to the roistering Ward, enliven proceedings no end. 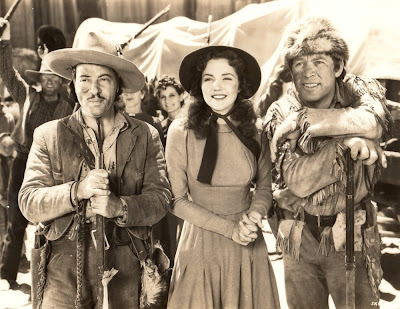 Ward Bond at his best
Ironically, the whole shoot was done in Monument Valley, home of the Navajo – the Navajo who suffered so terribly at the hands of the real Kit Carson. I wonder if they thought of that.


The movie was produced by Edward Small so we get the amusing opening frame of a giant, mountainous logo announcing ‘Small’. It was directed by George B Seitz, whose last Western this was. He had started on silent Westerns in the 1920s and had directed the Randolph Scott Last of the Mohicans in 1936. He did a good job, with sweeping vistas, nicely photographed by John Mescall and Robert Pittack, and lots of action.


Clayton Moore (who sounded like The Lone Ranger even then) is the brave leader of the emigrants who sacrifices himself to save the wagon train. And silent movie hero William Farnum is the noble and brave hacienda owner. He had starred in The Spoilers in 1914 and made 62 Westerns, right up until 1952.


A big-budget B, Kit Carson is historical tosh and a pretty corny, old-fashioned melodrama but it has several qualities and is quite a lot of fun.

One day, though, we'll get the real Kit Carson in film. That'll be the day. 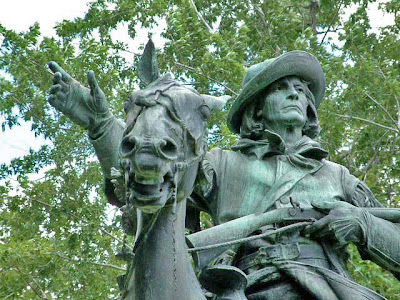