The Marx Brothers, Bob Hope, WC Fields, all comedians had to Go West or be a Paleface sooner or later but Buster Keaton did it first. This 69-minute 1925 classic set the standard.


Down and out in Indiana, ‘Friendless’ heads first for New York, then boards an AT&SF boxcar for the trip out West. 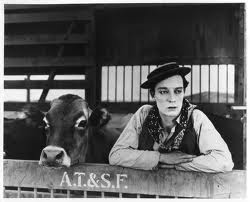 Riding the boxcars
There he gets hired on as a cowboy and proceeds to have adventures. 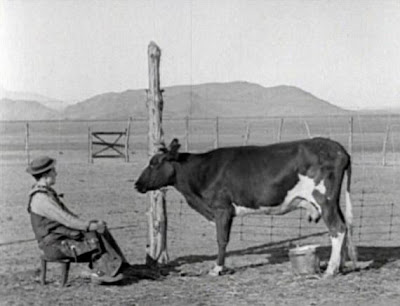 Cowboy having an adventure


He plays poker with a card sharp, accuses him of cheating and the villain replies (on the inter-title, of course), “When you say that, SMILE.” The reference would not have been lost on audiences of the time and nor is it on you, dear readers, avid readers of Owen Wister as you all are. Of course, Buster does not smile. 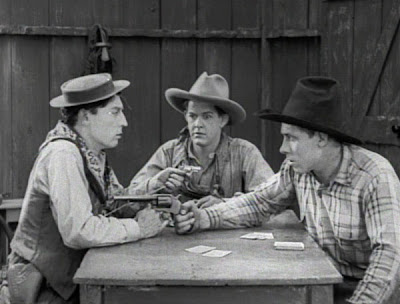 Smile!
He gets into all sorts of scrapes such as a gun fight on the railroad, bronco busting and cattle wrangling. Naturally he does his own stunts. In fact, Keaton even doubled for other actors, doing their stunts too. He falls from a train, in a barrel. He falls from a suspension bridge. He also falls for a beautiful heroine with brown eyes, though in a black & white film we have to take that on trust. Just to be sure, however, Brown Eyes is her name. You need to see the movie truly to appreciate the allure of Brown Eyes. 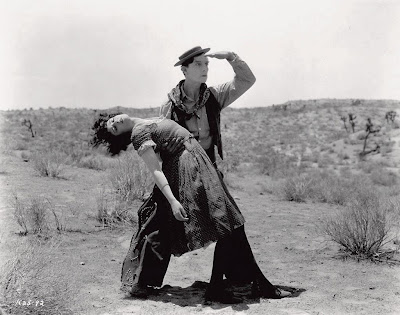 It's not what you think
In the end we see him in downtown Los Angeles dressed in a devil’s costume (we are told it is red) herding thousands of cattle into the stockyards. The grateful rancher, whose livelihood he has saved, offers him any prize he wants. He says, “I want HER.” The movie finishes with Buster and his true love driving off in a car. 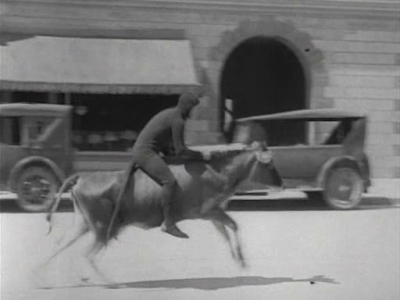 Surreal
The LA scenes are hilarious, still, and the way Buster plays the whole story with a sad, wry warmth is wonderful. Written and directed by Buster Keaton “assisted by Lex Neal”, it was filmed at Kingman, Arizona and at the Coca-Cola building on E 4th Street in LA.


Roscoe ‘Fatty’ Arbuckle (uncredited) is one of the women in the department store.


I love this film.