Just 'Short' of a Classic

André de Toth, whose first Western Ramrod was, was an interesting fellow. Hungarian (his real name was Sâsvári Farkasfalvi Tóthfalusi Tóth Endre Antal Mihály, which probably wasn’t too Hollywood-friendly) he directed five films in pre-War Europe, served as an assistant to Alexander Korda in England and went to Los Angeles in 1942. 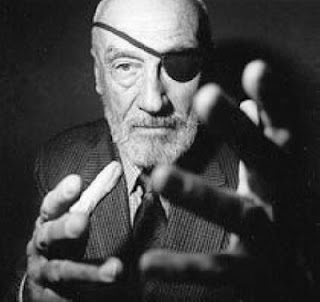 
Though assigned to low-budget movies and struggling to make his way, he somehow met and married big Paramount star Veronica Lake. She was to be the female lead of Ramrod, with the character’s name of Connie, actually her own birth name. 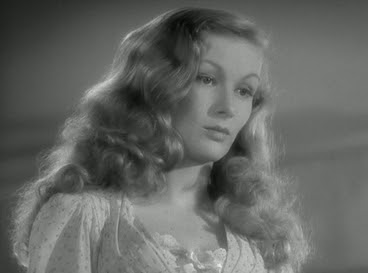 Veronica Lake: poker-faced but it wasn't Western poker. Should have stuck to noirs.


The movie was to have been directed by John Ford (an interesting might-have-been) but he was taken up with My Darling Clementine and suggested the studio hire de Toth.


De Toth was to write and/or direct twelve Westerns and he loved them. Ramrod and his writing of The Gunfighter for Henry King in 1950 might have been his finest Western achievements, although he did also direct some good oaters with Randolph Scott such as Man in the Saddle in 1951 and Carson City in ’52.

It was the first film of producer Harry Sherman's new company, Enterprise. He thought (and he was right) that post-war audiences, especially returning soldiers, would want grittier, more adult and less romantic Westerns. That was De Toth's remit.


Ramrod is a very good film but it’s just short of a classic. The movie has two huge advantages. It was written by Luke Short and starred Joel McCrea.


1.    Short was one of the greatest of all Western novelists, well above the pulp line, and books like Dead Freight for Piute, Coroner Creek, Gunman’s Chance, Vengeance Valley and Ride the Man Down were all made into quality Western movies. The stories are taut, gripping and authentic, and they contain real characters who think. Ramrod, the book, is a very good read. And the film is an unusually close rendition of the book. 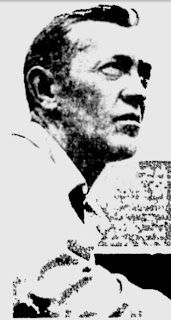 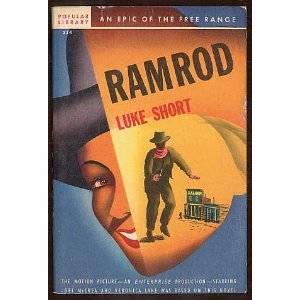 The book
2.    Joel McCrea was in 35 Westerns between 1933 and 1976 and managed to avoid Italian and TV Westerns (with the sole exception of NBC’s Wichita Town 1959 – 60). The Gunfight at Dodge City, Colorado Territory, Four Faces West, Wichita, Ride the High Country, these were top-notch oaters and there were many other good ones too. He was always quiet, decent but determined. In Ramrod he plays Dave Nash, just out of a bout of hard drinking, hired to ramrod Veronica Lake’s outfit when she goes it alone to spite her daddy. 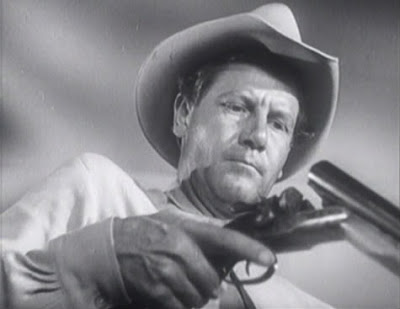 
Actually, McCrea wasn't too keen on De Toth and expressed a preference for Raoul Walsh, but he was over at Warners helming another noir Western, Pursued, with Robert Mitchum.

Other plus points come from the lovely black & white photography of the Utah locations by Russell Harlan, with noirish tints that suit the plot admirably. Noir Westerns were all the rage at the end of the 40s. And there is rather delightful Adolph Deutsch music, which plays variations on a theme of These Thousand Hills but without the cheesy 50s Hollywood angel choirs in the movie of that name.


I also liked the fact that a strong, independent woman was at the center of the story, not just an add-on as in so many Westerns, even if she comes across as a scheming siren.


So the movie had a lot going for it and indeed, many aficionados do regard it as a classic. 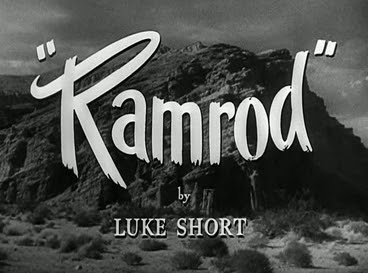 
However, it does also have some weaknesses. Veronica Lake, for one. This was her only Western (though she was also in a Juarez Mexico LIP 'B' picture in 1951) and it was abundantly clear that this glacial, neurotic, 1940s Hollywood lady did not suit the genre. Of course, she looks glamorous. Her husband lovingly filmed her in her best light, often in soft focus, with flowing curls framing her face. But as a Western rancher woman she doesn’t convince one bit. She should have stuck to crime noirs with Alan Ladd. Actually, McCrea had reservations about Lake too. "When you work with the director's wife, it's for the birds." Though I'm not the greatest Barbara Stanwyck fan, I do think she would have been better in the part of Connie. McCrea of course starred with her in three Westerns, The Great Man's Lady, Union Pacific and Trooper Hook.


Then, despite the carefully crafted story, De Toth and his scriptwriters play about with it so that the first reel is not easy to follow. A lot of names of people we haven’t met yet are bandied about. Actually, you need to see it twice. Fortunately, this is no hardship. 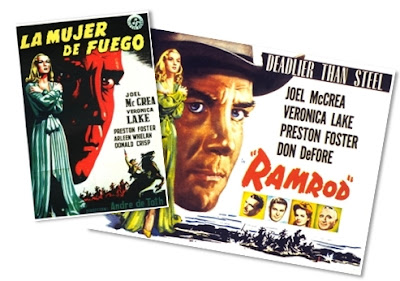 Why it was called Woman of Fire, I don't know. Woman of ice, maybe


Some of the support acting also is weak. Don DeFore, as the good-bad pal of McCrea, a little like Steve in The Virginian, wasn’t right in the part. It was in fact his only Western movie, probably sensibly. And Donald Crisp was the sheriff. Oxford-educated Englishman Crisp appeared in a number of Westerns and was used by John Ford but didn’t convince in any of them. He did nine back in the silent days as actor or director, that was OK, then was in the unfortunate Cagney/Bogart movie The Oklahoma Kid, as the judge. After Ramrod, he did Whispering Smith with Alan Ladd and The Man from Laramie with James Stewart and a couple of others. But he wasn’t right either and probably should have stuck to Easterner parts. 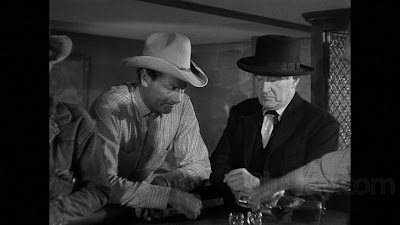 
On the other side of the coin, Arleen Whelan is the anti-Lake, the other woman, who really loves Joel, and she is rather good, and there are small parts for a young Lloyd Bridges and good old Ray Teal (he comes to another sticky end), so it’s not all bad.


Certain cinéastes, Martin Scorsese for one, consider Ramrod a masterpiece. Well, it may be. I’m no Scorsese, only a Western buff. All I can say is that I love watching it; it’s very, very good. But it’s just short of great.